“Hello disgusting lefty. I’m leaving you this [drawing of military dictator Rafael] Videla so that you think better what you do.” 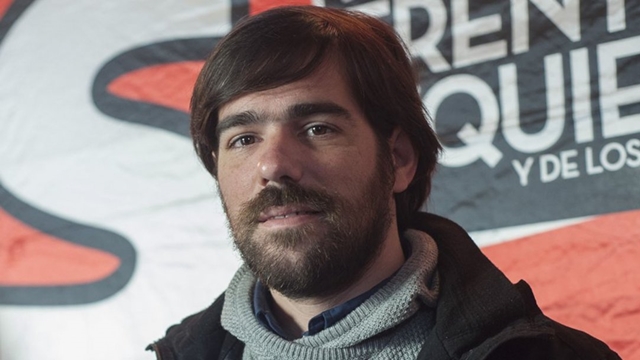 “Hello disgusting lefty. I’m leaving you this [drawing of military dictator Rafael] Videla so that you think better what you do.”

One of the messages featured a drawing of Jorge Rafael Videla, the former dictator of Argentina, with this message: “Hello stinky lefty. I’m leaving you this Videla so that you think better what you do. I’ll meet you in the [Ford] Falcon.”

Videla was the army commander who headed the military coup in 1976 and presided over the military junta that ruled Argentina thereafter. He was responsible for kidnapping and killing 30,000 people, most of them radical unionists and left-wing activists. The reference to the Ford Falcon is known to every Argentine: the military used green Falcons to abduct activists and take them to clandestine detention centers, were they were kept for up to several years, brutally tortured and usually killed. Their bodies were dropped in the Rio de La Plata during the “vuelos de la muerte” (death flights).

The threats against Del Caño are not the first of their kind. In September 2006, detention center survivor Jorge Julio López was kidnapped and disappeared hours before testifying in court against the crimes of the military dictatorship.

This episode served as an eloquent reminder that state terror and the intelligence services behind it were still alive and well under formal democracy.

More recently, amid a wave of strikes and protests by teachers and students against cutbacks on education, a teacher was kidnapped and had her skin carved with a threat: “No more pots.” The threat referred to the meals some unions and social organizations prepare to feed kids and the unemployed.

The death threats to Del Caño come at a moment of sharp social polarization as masses of Argentines have rejected the austerity measures implemented by the administration of President Mauricio Macri. On the eve of the fourth general strike against Macri, Del Caño received the messages from different phone numbers across the country, signaling a coordinated operation.

Myriam Bregman, member of the Buenos Aires City legislature for the Workers’ Left Front received similar messages in the past couple days. She had already received death threats in September 2017, but no action was taken by the government to prosecute those responsible. Eight months after the demand of an investigation was filed, it was determined that the call had come from the phone of a lawyer who defended police officers involved in a drug trafficking scheme in Córdoba. He has not been charged with a crime.

Hundreds of human rights personalities, members of Congress and social activists expressed solidarity with Del Caño and repudiated the death threats. As of Tuesday, the hashtag #RepudioAmenazasADelCano (I repudiate the threats against Del Caño) was trending on Twitter.