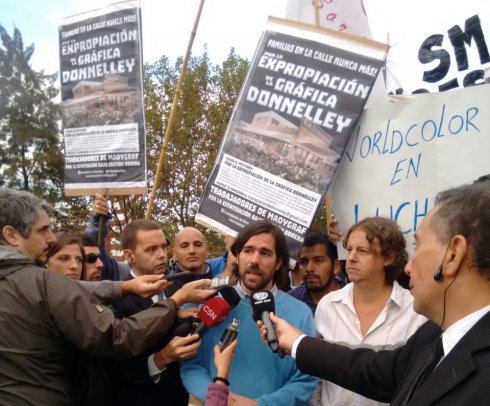 National deputy del Caño spoke to La Izquierda Diario. He said, “The strength of the strike is evident. Workers have many reasons to walkout today, not only workers’ income tax but also the fact that half of the working class in Argentina gets less than 5,500 pesos (near 600 USD) a month. Also poor work conditions, which affect in the first place young workers, production pace, within many other serious problems for workers.”

Del Caño noted that the walkout was strong “despite the trade union bureaucrats, who don’t represent workers’ interests. Instead of that, they support bosses’ parties and candidates, like Sergio Massa, Daniel Scioli, or Mauricio Macri.”

He added that, “We need a real action plan for the whole working class, and not an isolated protest. Government insist on blaming workers saying they’re selfish; and they justify the workers’ income tax provides funding for social programs, but we all know that in fact, with that money, government pay external debt and grant bosses’ subsidies. Government officials who say these huge lies, like Economy minister Kicillof or chief of staff Anibal Fernandez, get 15 or 20 times more than an average worker. The strike is a strong answer to the government.”

Del Caño underlined that he joined workers this morning, along with militant unionists, left and rank-and-file delegates in the roadblock at Panamericana, and Christian Castillo, provincial legislator from PTS and Left and Workers’ Front, “because this is an action which seeks to state workers’ demands, independent from union bureaucrats, who support bosses’ parties. That is why this and other actions are remarkable. They also show the growing influence of the left within militant workers.”