Thousands of workers, women, and youth gathered on International Workers’ Day at a rally organized by the Workers’ Left Front (or FIT according to the Spanish acronym) in Buenos Aires. 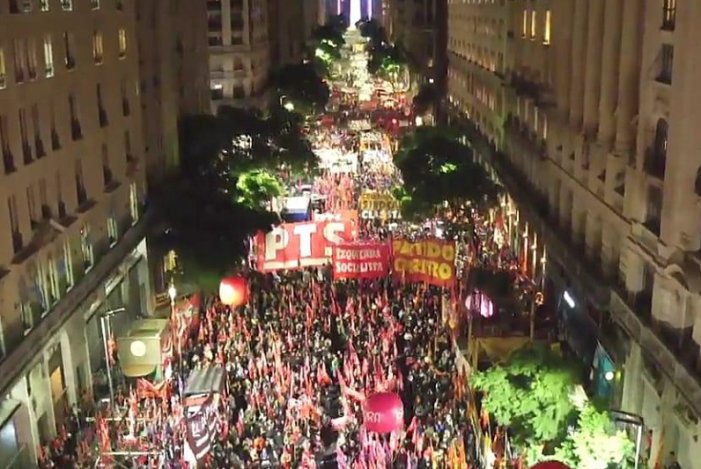 The demonstration took place in the context of major budget cuts dictated by the IMF along with growing inflation and unemployment in the country.

The Left Front is a growing revolutionary socialist alternative to the capitalist parties.  More than a million voters have backed the Left Front in each of the last three elections. During the rally, speakers made it clear once more that the only way out of the economic crisis is to call off the agreement with the IMF and fight their vicious plans for the country.

Argentina is now in an election year. The Kirchnerists, who governed during the Pink Tide era aim to make wide-ranging agreements with more conservative Peronists, the union bureaucracy and the Church, while positioning themselves as the  “lesser evil” to president Maurico Macri. The Workers’ Front will also partake in the elections and has already presented its presidential slate with Nicolás Del Caño from the PTS (Socialist Workers’ Party) as candidate for president and Romina Del Pla  (a leader within the Workers’ Party (PO), which along with Socialist Left (IS), comprises the Left Front) as vice president

Del Caño, a key speaker at the rally, also called attention to the situation in Venezuela during his speech, declaring, “We reject the attempted coup in Venezuela orchestrated by the US and backed by Macri and right-wing parties across the continent. We call on the Venezuelan people to fight back against this imperialist-led coup, without giving any political support to Maduro, and without any trust in the Venezuelan armed forces who have negotiated with the coup leaders. The rebellion against this coup must be carried out with the methods of the working class and the poor.”

The new imperialist advance is expressed in Argentina through the agreement with the IMF.

The deal implies nothing less than the IMF’s command over the Argentinian economy for the next several years. The agreement has been supported by all of the bosses’ parties, either openly t (in the case of Macri and his allies, conservative Peronists and the trade union confederation, the CGT) or tacitly by refusing call for cancelation of the agreement (the Kirchnerists and other trade unions). This agreement will only mean a broader subordination to international finance capital and to the imperialist powers. It will deteriorate living standards — in short, it will make the masses pay for the crisis at hand.

Although there have not yet been major mobilizations by the masses against the deal the PTS intends to continue working alongside thousands of workers and young people who share this perspective, and together with them and the Workers’ Front, begin to develop a great process of political agitation to reach the majority of the working class.

Lorena Gentile, a PTS member and rank-and-file worker  at the Mondelez Food production plant (formerly run by Kraft) in Buenos Aires spoke to the rally.“Warren Buffett, who is now the owner of Kraft, and one of the richest men in the world, once said: ‘I have no doubt that this is a class war and it without a doubt that mine is winning’ There are 16,000 children who die every day across the world because they don’t have enough to eat. That is “the victory that the capitalists celebrate, and that fills us with hatred. However, that hatred must be channeled into creating an organization which can defeat them once and for all.”

Gentile talked about her experience in organizing in the fight for abortion rights, especially among women workers. She went on to describe how the workers once went on strike in Mondelez factory over a case of sexual abuse. In addition, she powerfully put forward the only genuine solution to factory closings and firings:

“We must have a program of our own: No more layoffs. Distribution of the working hours among the employed and unemployed. And occupation and workers’ control in every factory that shuts down and lays off its workers. The workers of the MadyGraf factory [a major printing plant now run by its workers] are an example, not only because they put it under workers’ control, but because they opened the doors to the community and started a workers’ club where unions and political organizations representing all stripes of workers are welcomed.

In this sense, rather than resigning ourselves to the  “lesser evil”, the Workers’ Front strives to put forward a clear program to unite the exploited and oppressed — workers, the unemployed, and women  — for when mass mobilizations emerge. The Workers’ Left Front is a political force capable of mobilizing in the streets to overturn the regime of the IMF and the bosses’ parties.

Del Caño emphasized: “We believe that the time has come to turn everything upside down, and we are sure that the beginning of this new chapter is getting rid of the IMF. There will be rebellion and rioting like we saw in 2001, but the difference is that The Workers’ and Left Front is far more equipped than before, with more militants, and far more recognition.”

With its thousands of members, activists in the unions and in the student movement, the Workers’ Front is the only political force in Congress that stands for breaking all ties with the IMF and refusing to pay the public debt. It demands the creation of a single state bank and the state monopoly on foreign trade to stop capital flight. It calls for a sliding scale of working hours to end both unemployment and overwork. And it demands the occupation of plants and factories that have been shut down, and for them to be put back to work under the management of the workers.

The national rally, as with all the activity of the Left Front, was focused in how we can build a major internationalist and revolutionary party that will fight to achieve a government of the workers and the poor.