As Election Results Trickle In, Protesters Take to the Streets

In the middle of a tight presidential race, demonstrators in cities across the country are already mobilizing against Donald Trump and the undemocratic system that may open his road to reelection. 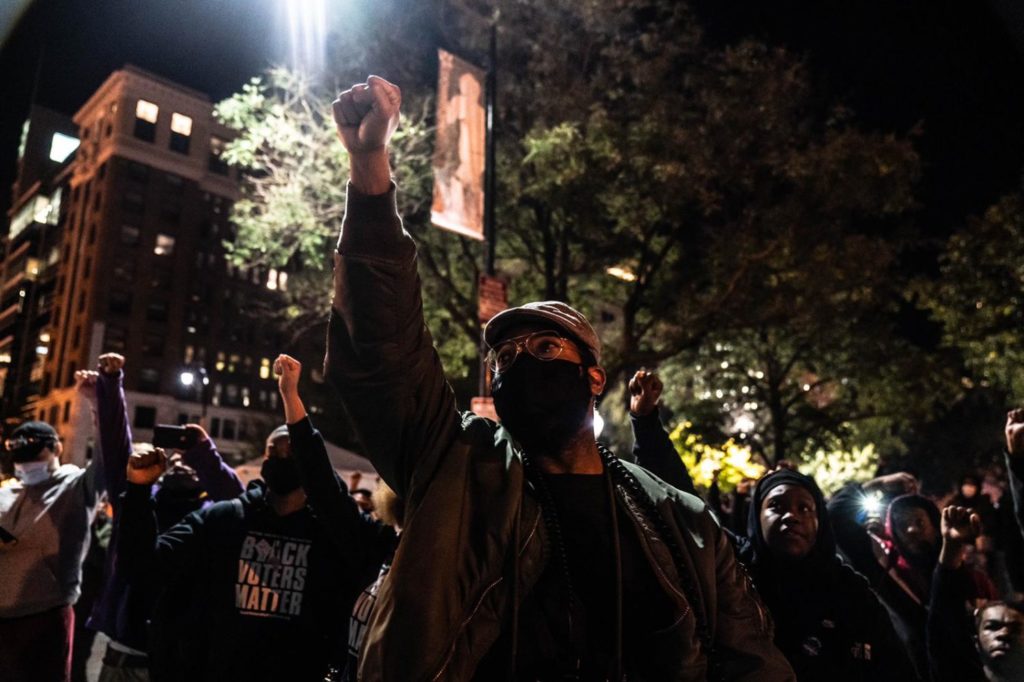 The 2020 election is proving to be a closer race than the polls and media forecast over the last few months. With in-person votes still being counted and many mail-in votes yet to be counted, the race is still too early to call. But as the results come in, Donald Trump has pulled ahead in key states such as Florida, North Carolina, and Texas, while Biden has swept the West Coast.

Though there is still a long way to go before a winner is declared, hundreds of people across the nation have joined Election Day protests — against Trump, against the undemocratic electoral system, and to show that the momentum of the anti-racist uprising that began earlier this year and swept across the country is not overt.

After polls closed in Washington, D.C., hundreds of people gathered in “Black Lives Matter Plaza” to follow the results and protest Trump. Large banners read: “Trump Lies All The Time” and “Remove Trump.” As favorable results from elsewhere began trickling in for the sitting president early in the night, demonstrators began to march through the streets.

Protesters are now being confronted with massive police repression as the cops gear up to use dispersal weapons to break up the demonstrations. As of this writing, three people have already been arrested in clashes with the police near the White House.

I’m at 16th and I St. NW.
A “scuffle” broke out between DC Police bicycle patrol officers and a small group of protesters. It happened a block away from the White House. The police moved back and rode away from the area on their bikes: @nbcwashington #Election2020 #ElectionDay pic.twitter.com/B8FZxKJqVb

In Portland, Oregon, multiple protests are unfolding across the city against both Trump and Democratic Mayor Ted Wheeler, who is responsible for unleashing intense brutality against the anti-racist protests this summer. Calls from hundreds of protesters to “defund the police” resound through both mobilizations. s people march through the streets, the police are cracking down on the demonstration, justifying their brutality because  marchers didn’t get a permit.

The police aren’t the only ones out to control Election Day protests in Portland. Democratic Governor Kate Brown called a state of emergency ahead of the elections and has authorized the National Guard to be on standby. Moreover, federal officers are still targeting protesters, and on Tuesday the Department of Justice asked a federal judge to put an emergency hold on an order to keep federal officers’ out of downtown Portland.

Hundreds of demonstrators also marched through Seattle on Tuesday night, chanting “Black Lives Matter.” Seattle has been the site of some of the largest and most dynamic protests against police terror over the past several months. Now, on election night, people are taking the streets again. The police responded immediately, following the marchers in military vehicles. As of Tuesday night, eight people had already been arrested for pedestrian interference, obstruction, assault on an officer, reckless driving, and criminal mischief.

Demonstrators have Westlake blocked at Mercer.

We may not yet know the results of the election, but people are not waiting for a victor to be declared before reigniting the struggle in the streets. In response to this upswell of activity, city officials have reacted with violence to repress the demonstrations — sending local and federal cops out in droves. More protests are sure to break out across the country. The newly politicized generation that took to the streets this summer will not stand idly by as another bourgeois election silences the voice of millions of working and oppressed people.