As the strike at UMEC reaches its six-month anniversary, it is urgent to break the workers’ isolation and for the Teamsters union to mobilize its membership in support of their struggle. 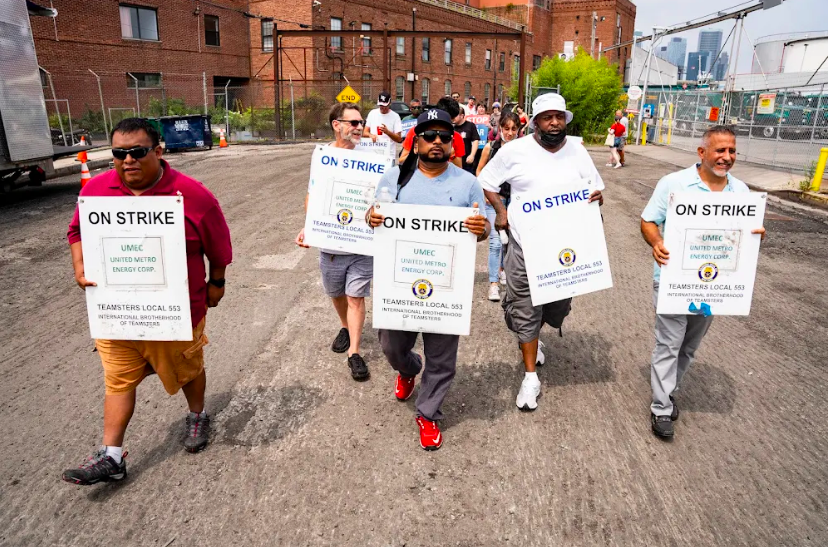 We are in the midst of what the media has dubbed #striketober. Across the United States, tens of thousands of workers are on strike or have voted favorably for strike authorizations. The strikes include 1,400 Kellogg’s workers, organized by the Bakery, Confectionery, Tobacco Workers and Grain Millers (BCTGM) International Union; 10,000 members of the United Auto Workers (UAW) at John Deere; 420 workers at Heaven Hill Whiskey, who are organized by the United Food and Commercial Workers Union; and 5,000 public service workers in the Service Employees International Union (SEIU). On top of these, some 40,000 healthcare workers at Kaiser Permanente have authorized a strike. So, too, have 60,000 entertainment industry workers in IATSE — who may vote down a sell-out tentative agreement.

These strikers and would-be strikers are joining other struggles that have been going on for long periods now, including 700 nurses at St. Vincent Hospital in Worcester, Massachusetts, who have been striking for seven months; the MET Coal miners in Alabama; and the United Metro Energy Corp. (UMEC) oil workers in Brooklyn, New York, reaching the six-month mark in their strike.

The oil workers have been fighting for two years to secure their first contract since unionizing as Teamsters Local 553. They are demanding higher pay, inclusion in the union healthcare plan, and pensions. Today, UMEC workers are paid between $10 and $15 less per hour than their counterparts in unionized shops with contracts, where workers do the same work — including at one shop just down the street. Like so many other workers across the country, they were called “essential” during the pandemic, helping keep society running. Now, as they strike to improve their working conditions, they are being treated as disposable.

They have shown strength and resiliency in their fight with John Catsimatidis, their billionaire boss who also owns the Gristedes supermarket chain. But to win the strike, to make the slogan “one day longer, one day stronger” a reality, the strikers need to hold firm and continue cutting into UMEC’s business and profits. Corporations and millionaires have the resources to withstand long strikes, while workers are fighting not only the bosses but against the clock, because walking out means they lose their main source of income.

The Teamsters union must take immediate actions to paralyze all activity at the UMEC facility, beginning with organizing the union’s own members who have been going in and out, crossing the picket line with their trucks to load oil for home and commercial heating while their fellow Teamsters try to hold the space at the entrance. There are more than 100,000 Teamsters in Joint Council 16 (the New York City area) alone, and tens of thousands of workers in the area labor movement, who could join in solidarity and surround the facility in support of the UMEC workers.

We are in a situation today that favors building that kind of solidarity across the unions. Every media outlet in the country is talking about the working class stepping up against the bosses after enduring the Covid-19 crisis. The success of all these strikes are connected, and their are lessons to be learned from the struggles happening right now.

An injury to one is an injury to all. When workers win, it is a source of inspiration for millions, , a victory of workers is a source of inspiration for millions. As the cold approaches, UMEC will need to increase its production, which could give new momentum to the workers. It’s time to break the isolation of the UMEC workers and help them decide the steps to take to reinforce their struggle.