Berlin Hospital Workers on Strike Against Outsourcing and Poverty Wages

Service workers at Vivantes, Berlin’s public hospital system, have been on strike for the last ten days. Since their jobs were outsourced, they earn significantly less than other hospital workers. International solidarity is needed! 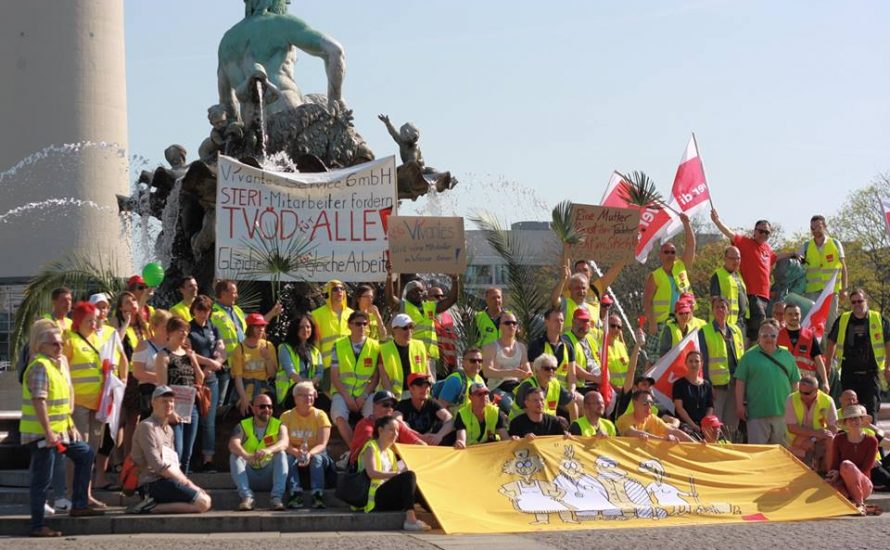 Berlin hospital workers have been on strike for 10 days. They are demanding equal pay for equal work and an end to outsourcing. The public hospital corporation Vivantes runs nine hospitals and employs 15,000 people in the German capital. Most workers at Vivantes are paid according to the collective bargaining agreement for the public sector. But this contract doesn’t apply to the service workers of the Vivantes Service GmbH (VSG), a wholly-owned subsidiary.

This means that VSG workers – who are responsible for sterilization, textile cleaning, patient transport and the whole infrastructure of the hospitals – might earn 40 percent less than their colleagues for the exact same job. Of the roughly 900 VSG employees, 600 have old contracts with Vivantes and therefore earn the established public sector wages. The other 300 have contracts with the VSG and earn up to 1,000 euros less per month, besides having lower bonuses and fewer vacation days.

Over the last ten days, roughly 60 workers have joined the strike, which has focussed on a different Vivantes clinic each day. Many operating rooms are only open for emergencies. A real bottleneck has been the sterilization, where the adherence to the strike is highest. Management has been using office workers with no qualification for sterilization as strikebreakers.

“We have to prepare standard instruments from surgery and neurology, as well as endoscopes, operation robot arms and incubators” explains Juliane Hielscher, a striking sterilization worker. They use gas, plasma, steam – this not a job which untrained people can jump right into. Vivantes has since confirmed that “certain activities” in the sterilization are being done by “other workers under supervision.” Strikers says this is putting patients’ lives in danger.

Ten years ago, the Berlin government — a coalition of the social-democratic SPD and Die Linke (the Left Party) — forced all public companies to outsource in order to reduce labour costs. Now virtually every hospital, museum, university and transport company in the city has a private subsidiary in order to employ people for low wages, far below average public sector levels. Workers are fighting back. The workers of the Botanical Garden, for example, were able to win equal pay for outsourced workers after four years of struggle. The subsidiary was then promptly dissolved – who needs a subsidiary if the wages are the same? – and the workers were reincorporated.

Last year there was a strike at the Charité Facility Management (CFM), which is the outsourced company for service personnel at the Charité, Berlin’s other big hospital network. The CFM workers won a major wage increase this year, but they are still far below public sector wages. Guides at the Technical Museum or physiotherapists at both big hospitals are also fighting for reincorporation.

At the end of 2016, a “red-red-green” government of SPD, Die Linke and the Greens assumed office in Berlin. They promised in writing that outsourced workers in the public sector would have their wages raised “speedily” to levels comparable to that of their coworkers. But after 18 months, the situation has not improved at all. Quite the opposite: Members of the governing coalition are now saying that reincorporating these subsidiaries will not be possible any time in this legislative session.

The strike at the VSG is a struggle that goes far beyond the Vivantes hospitals. The VSG workers are fighting for equal pay for equal work. They are fighting against increasingly precarious working conditions faced by workers across Germany, Europe and the world. They are fighting for a health care system that is well financed and staffed, with qualified personnel. That’s why they’ve gotten solidarity from many workers and left activists in Berlin. And they need international solidarity too.

Please send messages of solidarity – photos, videos or written messages – to Klasse Gegen Klasse, the German sister site of Left Voice, via Facebook or e-mail. We’ll make sure it gets to the VSG workers right away.