The German state expropriates things all the time, like when it needs to build an Autobahn. When a pit mine for lignite coal is built, whole villages get nationalized. So why not do the same thing to provide affordable housing for all? 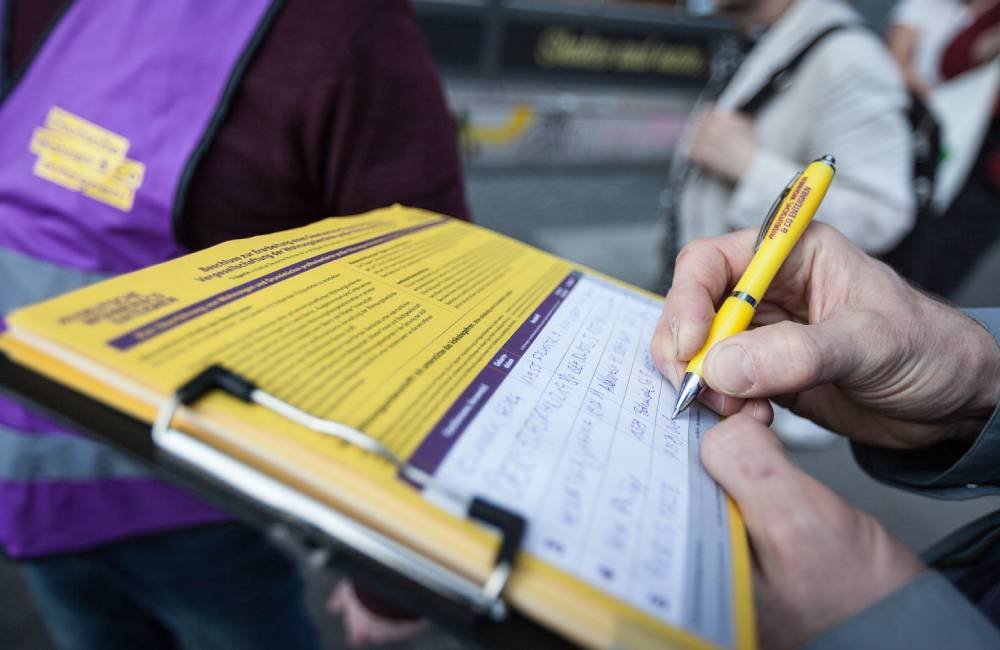 What happens with the rent you pay every month? Hopefully, some of it goes to maintenance. And the rest? If your apartment belongs to a public housing company like Gewobag, then about 27% of your rent goes to the construction of new apartments. In other words, your rent helps increase the number of apartments and thus lower rents.

If your apartment belongs to a private realty company like Deutsche Wohnen, then just 1% of your rent goes to the construction of new apartments. A much larger chunk goes to buying existing buildings, which means higher realty prices and higher rents.

In 2019, Deutsche Wohnen paid out €350 million in dividends to its shareholders. As the Berlin Tenants’ Association has calculated, that is over €2,100 per apartment. Or put another way: each renter pays €177 per month straight into the pockets of shareholders.

The shareholders include the investment corporation Blackrock. And Blackrock, in turn, supports Donald Trump and lobbies for tax cuts for corporations. Your rent money at work!

Almost everyone would prefer the public model, of course. Studies consistently show that renters from communal or cooperative housing companies are most satisfied — and renters at private companies are least satisfied. But what can you do? Deutsche Wohnen owns something like 100,000 apartments in the city. The largest four realty companies together own a quarter of a million.

Germany’s constitution, the Basic Law, offers a solution. Its Artikel 15 says: “Land, natural resources and means of production may, for the purpose of nationalisation, be transferred to public ownership or other forms of public enterprise by a law that determines the nature and extent of compensation.” (I explained the history of this article in my last column on the subject.)

To be precise, the article actually says Vergesellschaftung, which better translates into “socialisation” or “putting into the ownership of all society.”

But the point is: we can nationalise, also known as expropriate, them. In German, the word for that is “enteignen,” hence the name of the campaign Deutsche Wohnen enteignen!

The German state expropriates things all the time, like when it needs to build an Autobahn. When a pit mine for lignite coal is built, whole villages get nationalised. So why not do the same thing to provide affordable housing for all?

Have you seen the yellow and purple posters that appeared all over the city? I have never seen so many posters go up at once. On Saturday from 10am to 3am, over 1,000 activists put up 40,000 posters calling for “a city with affordable rents for all.” The posters are in German, Turkish, Arabic and — in a sign of how quickly the city is changing — English.

The campaign to gather signatures is beginning this Saturday (February 26). The activists will have four months to gather 175,000 signatures. That is 1,500 signatures a day — no small feat in a pandemic. If they clear that hurdle, the referendum will be on the ballot in September at the same time as the elections to the Abgeordnetenhaus, the Berlin parliament. Then, if at least 50% of votes are in favour, representing at least 25% of all eligible voters, nationalisation becomes law.

Rents have increased more than 100% in the last decade. We are all paying twice as much as 10 years ago — and for what? My apartment building has not gotten twice as nice. In fact, for many people, housing quality has been going down as fast as prices have been going up. During the cold wave, heating failed at two buildings at Kottbusser Tor, and Deutsche Wohnen didn’t repair it for weeks, leaving renters sitting in freezing apartments — again.

Situations like this happen all over the city. It’s no wonder thousands of people are joining the fight against Deutsche Wohnen.

Two of the parties in Berlin’s governing coalition, the SPD and Greens, reject nationalisation. The campaign does have the support of The Left, which is a welcome shift. It was the PDS (forerunner of The Left) that privatised 200,000 publicly owned apartments when it was in government with the SPD in the early 2000s. And earlier this month, The Left and SPD evicted a homeless encampment to make way for realty speculators.

Last year, Berlin got a Mietendeckel, a rent cap, and as a result people across the city have seen their rents lowered. But that cap could be cancelled by German courts. It is set to expire after five years, and the SPD has come out against extending it past 2025. Nationalising the private companies would keep rents down permanently.

The SPD is claiming that compensation for nationalisation would cost €36 billion. But that is just if they pay the fantastical “market prices” claimed by the speculators. They want to get double or triple what they paid for the privatised apartments 15 years ago. A Berlin public housing company did such a ridiculously overpriced “buy back” in September.

But that is the point of nationalisation and socialisation: nowhere does the constitution say anything about “market value.” One could just as easily argue that Deutsche Wohnen deserves just €1 in compensation. Or at most a few billion euros. As the campaign points out, all costs of nationalisation would be covered by rents — which would no longer be flowing into offshore accounts, but toward creating more public housing.

It seems like an obvious choice. The Tagesspiegel reported two years ago that 54.8% of Berliners support the demand. I will be out collecting signatures starting this Saturday, armed with an FFP2 mask and hand sanitiser. I encourage readers to get active as well. Only German citizens who are registered in Berlin can sign the petition or participate in the referendum — but anyone can help out with the campaign.

This isn’t just about the Berlin housing market, either. Even if some court manages to block the proposed law — maybe they can claim Artikel 15 of the constitution is “unconstitutional” — the great thing about this campaign is that everyone is talking about nationalisation. Why should we allow a handful of billionaires to own everything? And why do we let them do the exploit us every month, with rising rents and low salaries? We can start with Deutsche Wohnen, but I can think of a few other companies that should come under public ownership. Amazon and Facebook, I am looking at you!