Bessemer Opens the Floodgates: Amazon Workers All Over the Country Are Trying to Unionize

The small percentage of U.S. private-sector workers in unions looks to grow as the effort at the Amazon facility in Alabama opens the floodgates. Workers in Baltimore, New Orleans, Portland, Denver, and Southern California are discussing organizing drives. 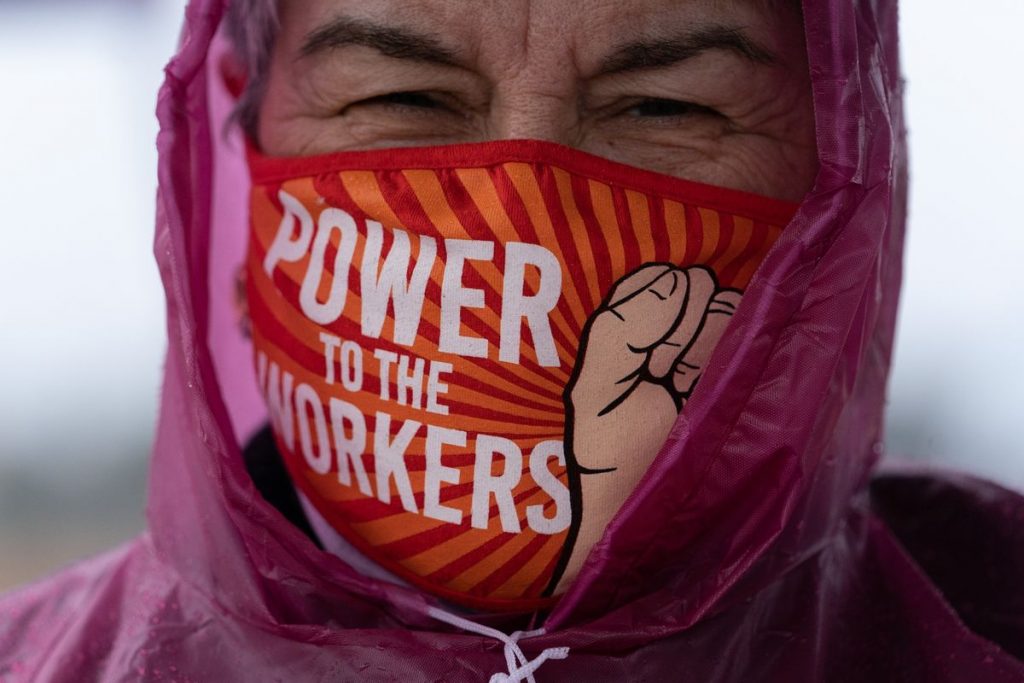 At its warehouses around the country, Amazon hires intelligence analysts to track “labor organizing threats” and spies on employees’ interactions in closed Facebook groups.

In Bessemer, Alabama, Amazon has pulled out all the stops to thwart the unionization effort, including everything from threats of job loss, phone calls to workers, and anti-union meetings during work hours. The company successfully petitioned the city to change the amount of time at red lights near the facility so organizers have less time to talk to workers in their cars. Amazon is paying consultants nearly $10,000 a day to stop the unionization effort.

But the struggle in Bessemer seems to be opening the floodgates. Amazon workers in Baltimore, New Orleans, Portland, Denver, and Southern California have reached out to the Retail Wholesale and Department Store Union (RWDSU) about unionizing their own warehouses. RWDSU says they have heard from more than 1,000 Amazon workers around the country.

Bessemer isn’t the only Amazon union push going on now. The International Brotherhood of Teamsters is pushing to unionize workers at Amazon locations in Grimes and Iowa City, Iowa. The drive’s organizers have spoken to between 400 and 500 Amazon workers in the area, which includes the location of a new 1,000-employee facility in Bondurant that opened last December.

Read more about the connections between the BLM movement and Amazon here.

The working conditions at Amazon fulfillment centers are nothing short of abhorrent. The company tracks each warehouse worker’s productivity and generates automatic warnings — without any supervisor input — if, for example, someone spends “too long” in the bathroom. Workers find themselves sometimes forced to pee in bottles just to keep their jobs. Workers are allotted only a minimal amount of “time off-task” (TOT) — a period in which they are not mechanically scanning packages. Every move is tracked, and workers who fall below a “productivity threshold” are disciplined or fired. The result of all this is a high serious injury rate in the facilities — 7.7 percent, which is about double the most recent industry average (which is already quite high).

Amazon is the second-largest  private employer in the United States, and workers have yet to succeed in organizing a union in a single facility. Retaliation is a real threat. Bloomberg News reports, “An employee in Nashville was fired in retaliation for discussing workplace conditions, and another in Illinois was pulled off of a shift ‘to discourage employees from engaging’ in activism, according to complaints filed in February with the National Labor Relations Board.” The company has fired “troublemakers” like Chris Smalls and countless people whose names we don’t know. A  2014 attempt by Amazon technical workers to organize in the International Association of Machinists and Aerospace Workers was thwarted by Amazon’s rigorous anti-union campaign.

Only 6.3 percent of private-sector employees in the United States are currently unionized. Walmart, the largest U.S. private employer, engages in similar anti-union tactics. Legal and illegal union-busting tactics are commonplace, making the basic right to a union difficult to win. That’s why it’s essential to fight for the PRO Act, as well as even more extensive laws that bar union-busting.

Even with the drive at Bessemer’s Amazon warehouse opening the floodgates for unionization efforts across the country, we’ve seen all too many unions function as “business unions” in a top-down manner and don’t fight for their workers. That’s why workers need to fight for more than just a union, but for unions run by the rank and file — to make them real fighting tools for the working class.

Unions are essential, and workers know it. Bloomberg reports on a 28-year-old New Orleans Amazon warehouse worker who drove five hours to Bessemer to support the union organizing fight. He told a rally, “If the most powerful company in the world can be unionized in an anti-union state like Alabama, it gives hope to people in Louisiana, in Mississippi, in West Virginia who are trying to do the same thing … We just have to support the fight wherever it’s at because the fight is going to come to us.”