The fight for Black liberation is, and always has been, part and parcel of the struggle against capitalism. Here we present Left Voice militant and editorial board member Julia Wallace’s speech on Black struggle that was delivered at the recent Latin American and United States Conference, called by the organizations of the Left Front in Argentina. 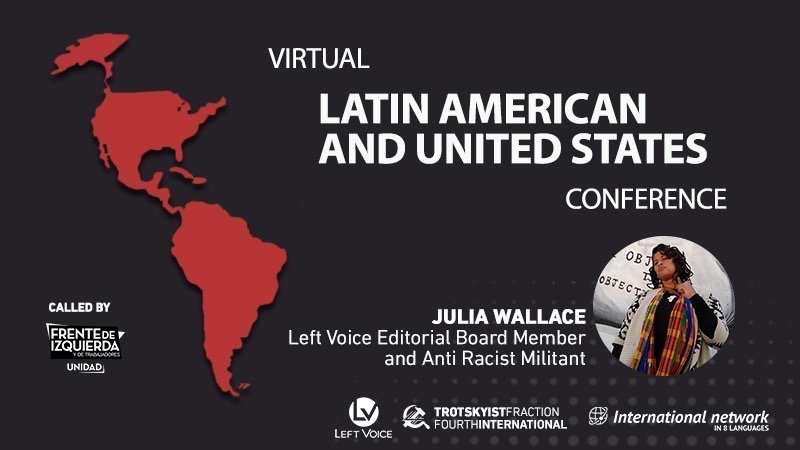 This is the month of Black August — a holiday created by Black revolutionaries in the U.S. honoring the Haitian Revolution, the Nat Turner slave uprising, and the freedom of political prisoners. As I speak these words, youth are in the streets across the United States. They are having battles with federal troops in Portland where the battles have been militant and unrelenting.

There are less people in the streets but the battles continue with fury. The fury of the uprisings is directed against the police, who are racist, violent, corrupt bigots all over the country, and the world. The combination of the economic crisis and the pandemic — both of which hit Black people in more extreme consequences than any other groups in the country — was the perfect storm.

The movement has been led by Black people, but includes a multi-racial sector of mostly young people. We’ve also seen some labor actions for Black lives, like the West Coast port strikes and countless statements from unions supporting the Black Lives Matter movement.

As my comrade Jimena already explained on Thursday, the Democrats are attempting to present themselves as the alternative to Trump, trying to co-opt the movement as they’ve done many times before. I am not going to repeat what she said, but only stress that any opposition to Trump must be accompanied by a clear delimitation of the Democratic Party.

I want to make clear also the relationship between racism and capitalism. From Lenin to Trotsky, our tradition has long discussed that Black struggle has to be a central concern of revolutionary socialists. This mantle must be taken up by Trotskyists today.

And we are aware that the only actor that has the power to defeat racism, and all forms of oppression until the end, is the working class. Racism is an enemy of the working class. So we fight for workers’ hegemony, we push our organizations to take up the fight against racism here and now.

In our workplaces, we are part of the rank-and-file movement fighting to expel cops out of our unions, schools, and workplaces, against the union bureaucracy. The police are not workers — they are our class enemies.

The uprisings happening are against the police strangling George Floyd to death. In the U.S., police unions have defended the assaults, rapes, and murders by the police. They are rife with white supremacists.

It is absurd to advocate for police unions! Why would we want our class enemies to have higher wages and better organization? No! No cops in our unions.

We also need to fight for our unions to take an active role in uniting the struggles that are affecting people right now: the coronavirus is on the rise in the U.S., and yet the capitalists want to send teachers back to overcrowded classrooms. Unemployment benefits are ending, as are eviction moratoriums, while Jeff Bezos and other capitalists make massive profits.

And further, throughout the pandemic, U.S. imperialism has continued to wreak havoc across the world. It continues to drop bombs in places like Iraq, to build the racist border wall, and to deport immigrants to Central America. Likewise, the Republicans and Democrats are united in their hostile policy towards China.

That’s why as Left Voice, we are part of the multi-racial Black led struggle against police brutality and structural racism. We participate in the occupation in New York, we are healthcare workers on the front line of the pandemic, and our comrades were arrested for being at protests.

We are in our unions fighting to expel the police. With 500 thousand visits a month, Left Voice is a known advocate for a socialist perspective in the fight against racism and for the democratic self-organization of the sectors in struggle.

Our publication is playing a central role in regrouping the revolutionaries in the US, demanding that the DSA break with the Democratic Party, and laying the ground to build a revolutionary organization for the fourth international at the center of U.S. empire.