The Los Angeles Rams will soon have a new $4 billion football stadium, which will host the Super Bowl in 2020 and the Olympic Games in 2028. Parts of the stadium are being built some 1,240 miles away in the town of Salto, in the Mexican state of Jalisco. 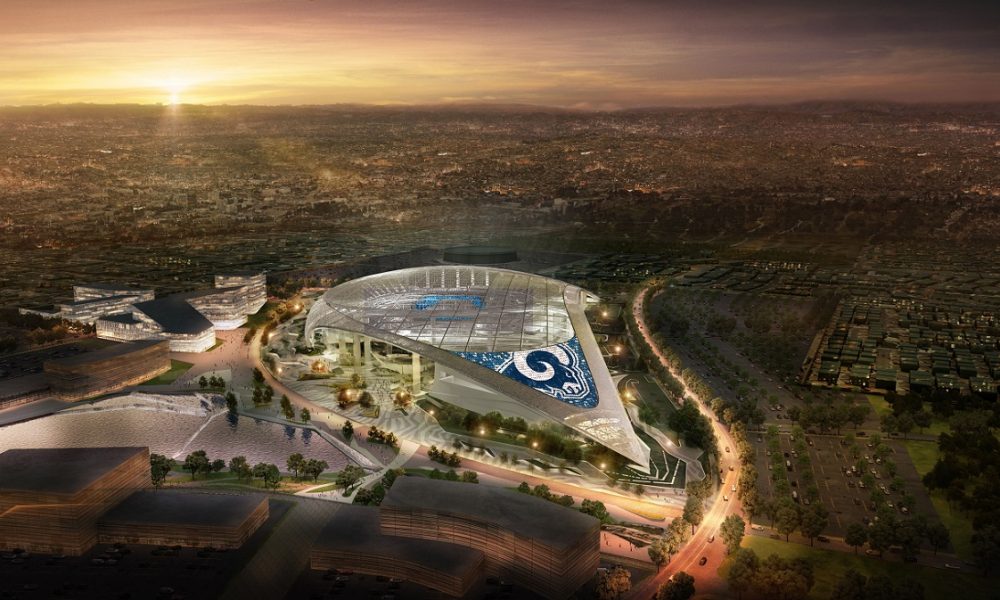 Image from The Los Angeles Rams

The Los Angeles Rams and Chargers will soon have a new $4 billion football stadium. Los Angeles Stadium at Hollywood Park, located in Inglewood, California, is being constructed about 1,240 miles away in a town called Salto, in the Mexican state of Jalisco. I am one of the workers building this stadium day in and day out.

Chargers president of business operations A.G. Spanos says this will be the best stadium in the NFL. The cost is estimated at over 4 billion and the stadium will be completed by 2020.

The construction of the megastadium is well under way, and much of the structure of the stands has already been delivered. Meanwhile, real estate speculation near the stadium site in Inglewood is rising, leading to increased rents that are forcing out local families.

Why Build a Rams Stadium in Mexico?

In El Salto, the company Corey Estructuras, which belongs to Grupo Recal, is in charge of assembling the steel structures of the impressive stadium, which will accommodate more than 70,000 people. The question is, what is there in El Salto, Jalisco, that allows us to build a superstadium of this size? Why not build it in LA and save the transportation costs?

For more than three decades, Jalisco has been the headquarters of companies that specialize in steel construction and assembly. Many workers in the state specialize in this field, including welders, CNC operators, tracers, and so on, who are experts in working with steel and assembling metal structures for any type of construction.

Estructuras Corey established its megafactory in El Salto in 2005. Since then, the company has constructed important buildings, including the Honda plant in Celaya, the Bancomer Tower in Mexico City and sections of the Hudson Yards towers in New York.

Workers at the Estructuras Corey plant face difficult conditions. Accidents are constant, because the work requires using a lot of machinery, much of which is old and out of date. People are regularly burned and many of us have broken our fingers. Just about everyone has had a back injury because we have to carry some of the materials to other areas of the factory. There is also machineryto transport materials, but that is just as dangerous. In other projects, pieces have come loose and fallen; people have been killed when a steel beams weighing several tons fall on them. There is constant pressure to deliver on time, and we lack proper training. Most workers at my job don’t stay long, since salaries are so low and there are almost no benefits.

Most of us regularly work more than 50 hours a week, picking up extra hours to cover basic needs.This forces us work extra hours, especially at the end of the month when rent and our bills are due. We end up exhausted, and our bodies broken. Back pain and all kinds of illnesses and injuries are common.

At the same time, however, building such a huge stadium shows us what we are capable of—doubly so, since we do it with little technology and in unsafe conditions, while earning a salary that does not adequately feed us.

This is why it makes sense to build a big, important stadium in Mexico: It is much cheaper to produce here. Mexican labor is among the cheapest in Latin America thanks to political parties that serve the employers and refuse to raise the minimum wage to a liveable wage. This has for decades kept most Mexicans in poverty.

Although our construction projects are financed in dollars, their cost is greatly reduced when the workers are paid in the local currency. Plus, we have highly specialized workers—this is a benefit that any capitalist would take advantage of.

Workers’ Unity on Both Sides of the Border

This is how both U.S. developers and the Mexican company reap massive profits when producing in Mexico. Myself and my co-workers are hyper exploited for a massive stadium in LA. Some of my co-workers think that in the US life is much better for workers and there aren’t such horrible conditions. However, workers in the US are being displaced because of the stadium, that my co-workers and I work to build every day. In Inglewood rent is increasing and the police are increasing their repression including harassment and even killing. Kisha Michael and Marquintan Sandlin were murdered by Inglewood police as they slept in their car two years ago.This repression is to displace working class Black and Latino people to move in more white, middle class people who can afford to pay higher rents. There is also labor abuse in the US, and there is also hyper exploitation, especially of undocumented immigrants who are trying to escape these conditions in Mexico.

Workers in both Mexico and the United States are victims of the same bosses who only seek to boost their profits. The millionaire owners always want the largest slice of the pie, while the workers are left with the crumbs.

They come to pay misery wages in Mexico. They come to hyper-exploit us, to make sure their profits are high. If they could extract such high surplus value stateside, they would; after all, they would avoid shipping costs. As it is, the cheap cost of Mexican labor makes it cost effective to haul an entire megastadium from El Salto to Inglewood.

That’s why the fates of Mexican workers and American workers are linked. If you unionize in the US and raise wages, the capitalists will just ship the jobs to Mexico to hyper exploit us. However, if we unite as a working class on both sides of the border to fight for our rights, we could change everything.

Even though we supposedly live in a democracy, workers on both sides of the border live in the factory dictatorship, where our rights are violated and employer repression is normal and naturalized.

The only way we can reverse this is by joining forces as a class—in each factory, in each work center and on both sides of the border. We must weave unity among workers; that’s the only way to win more than crumbs.