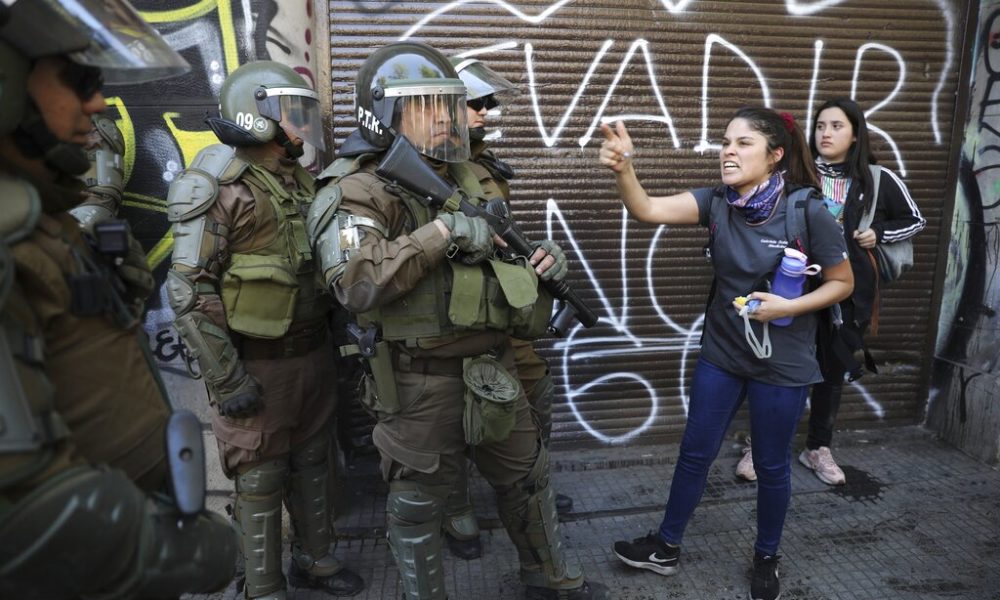 In Chile over the last several days, multiple allegations were made by human rights and feminist organizations concerning beatings, abuses, and threats of rape against women participating in the protests and cacerolazos (demostrations in which protesters bang pots and pans).

In the wake of arrests and attacks on protesters, women are reporting cases of sexual abuse on the part of the Chilean Special Forces, the Chilean National Police, and the military. As Chile remains under a state of emergency with curfews in several cities, such reports are mounting. There is a long history of sexual-political violence in Chile and Latin America in moments of high class struggle like Chile is experiencing now.

A psychologist from Santiago, Chile, speaking on the condition of anonymity said:

“All of the women who have been arrested were stripped naked in front of men, not in front of women as the law states they should be. All of them have been touched in the genitals, the breasts; several have had either the tip or the butt of a rifle inserted in their vagina and have been told they will be raped in the ass, that they will be treated as whores, that they are going to be raped and then killed. Many of these girls still have not returned to their homes.”

The uncertain fate of many of those arrested—2,000 people according to various news accounts—serves as a weapon to instill fear in the people.

One arrested woman described being placed face down on garbage while a member of the army threatened to shoot her if she moved, touching her with his rifle, saying he was going to “penetrate her with the weapon.” The accusation was picked up by the National Institute of Human Rights (INDH), which has taken this and several other cases to court to denounce the violence against women in the protests.

Pamela Maldonado, who was arrested with her father in Santiago, reported that on her way to the police station, a national police officer threatened to sexually assault her. “Let’s see if you like it up your ass,” he said when she was being transported.

This is not the first time that the forces of repression in Chile have been implicated in sexual violence and abuse. During student protests in recent years, many complaints were made against the Chilean National Police’s special forces for lifting the skirts of high school students. Students who were arrested during the protests also confirmed that the police touched their genitals, stripped them naked, and insulted them- calling them “Fucking whores” and “dykes,” among other names.

Sexual Violence as a Weapon of State Terrorism

In Latin America, the tortures committed by the Armed Forces against women have a long history. Abuses and rapes were commonplace under Latin American military dictatorships; “gender discipline” was an important part of state violence against women. During the trial against the genocidal Miguel Osvaldo Etchecolatz in Argentina, lawyer Myriam Bregman (a plaintiff in these and other cases of crimes against humanity, as well as a member of Congress for the Left Front) argued that “sexual violence carried out as a form of State terrorism” should be recognized as a key part of the actions the Armed Forces take to maintain control over the population.

Even under “democratic” regimes, rapes and abuses have been a tool of the repressive forces in Latin America. One of the well-known cases in recent decades occurred in San Salvador Atenco, Mexico, in 2006, during mobilizations to protect flower vendors facing eviction as well as state encroachment on community lands. Former president and then governor of the State of Mexico, Enrique Peña Nieto, ordered intense repression involving 3,000 federal troops against the people of San Salvador Atenco. As a part of that repression, dozens of women were systematically tortured and raped by police officers.

The violations committed by members of the repressive forces, both then and now, communicate a clear message of punishment and discipline, both physical and political. The violence does not end with the rape. It persists in the subsequent silencing of the women who come forward.

In another example, the troops of the United Nations Stabilization Mission in Haiti (MINUSTAH)  have been consistently accused of rape, abuse, and prostitution rings of women and girls.  Many branches of the repressive forces in Chile, as well as those in Brazil, Uruguay, Argentina, Bolivia, Ecuador, Guatemala, Paraguay and Peru, were trained by MINUSTAH.

Ongoing abuses by military and police forces confirm that sexual violence remains a weapon against women during moments of intense repression. The state is necessarily complicit in the reproduction of a long-standing chain of patriarchal violence. The latest examples in Chile of abuse and the denial of rights once again confirm the responsibility of the state for continued violence against women.