The growing demonstration of students and professors, who are now facing a turning point, have forced the government to close ranks with parliament, the mayors, the right wing, and the so-called New Majority, to put an end to the demonstrations. 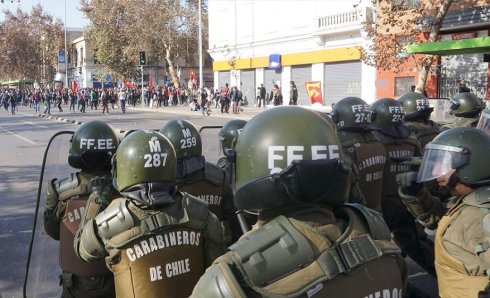 The Chilean government has begun a new agenda with a series of measures against demonstrations, and has prepared yet again to discuss the implementation of arrest for reasons of “suspicion.”

Their attempts to turn demonstrations into fruitless dialogues have collided with the people’s willingness to struggle. They turned to the official leaderships for the same purpose, such as the change from the “removal” to “re-design” of the Carrera Profesional Docente (a regulation governing the career path of education workers in the form of evaluations and incentives) proposed by the president of the College of Professors, Jaime Gajardo. Despite these attempts, the grassroots organizers have maintained their mobilization.

In this terms, they began to reinforce the repressive and anti – mobilization measures that pairs up with a nod to the right and entrepreneurs, who started with the change of Government Cabinet, and is defined these days with the decision to “prioritize” the government program .

The now-ex minister Eyzaguirre said “I will not give in,” and his successor, Minister Adriana Delpiano, said she would not negotiate if the protests continue. The mainstream media outlets are campaigning against the student-teacher strike. The former Socialist Party president, Osvaldo Andrade, called on the government to demonstrate its “authority” by cutting the pay of teachers on strike and the eviction of the buildings that have been taken over by the students.

The rich districts of Santiago have called for “cacerolazos” * afraid of the “insecurity.”

In this reactionary climate, the discussion on citizen security has been reopened .

The Agenda of ‘Citizen Safety’

The Government announced that it will immediately discuss the agenda currently being deliberated by the public safety committee of the House and that should go to the Committee of the Constitution, after conducting a Public Security Council, where police chiefs were involved in the discussion.

The same police that have not yet given their “reports” on the repressive outrage of Rodrigo Aviles on 21 May, though there is video evidence in public circulation.
The Government would implement preventive control to combat identity crime, a measure that had been eradicated in the past. Definitely, an Agenda that fits the Right.

*Cacerolazos are demonstrations typically organized by the middle class and neighborhood organizations, which are characterized by the loud banging of pots and pans (cacerolas) in the street