Clashes between students and federal police in Tixtla, Guerrero 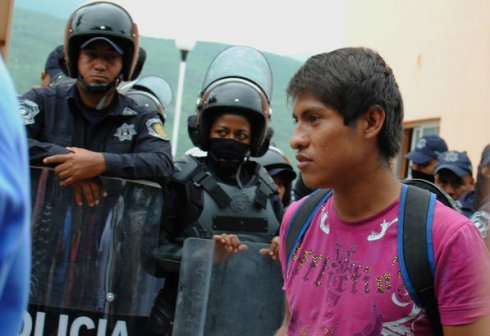 A group of about 500 students were planning to go to Chilpancingo to support the elections boycott when they were stopped in a tunnel and were kept from advancing, which triggered the clash. The students fought back against the Federal Police.

During the skirmish, tear gas and stones were thrown, and five students were wounded. According to Animal Político, the student teachers (normalistas) and other organizations were traveling aboard nine buses towards Chilpancingo, however, about 300 federal and state policemen were already waiting for them in the entrance to the Chilpancingo-Tixtla highway.

In the last few days, the state of Guerrero has been heavily militarized in preparation of the anticipated actions organized by the Coordinating Committee of Education Workers in Guerrero (CETEG) and the siblings of the 43 disappeared student teachers (normalistas).

Since June 1st, the CETEG has supported the national teachers’ strike, called for by the CNTE, as well as the electoral boycott. In last few days, teachers and students have burned over 1000 ballots.

The National Electoral Institute declared that “there has been an increase of federal forces in the state”, which “creates a bigger problem” in organizing the elections, especially now that the “work to organize the elections” has already begun. The electoral situation in the whole country is being critically questioned after the Mexican State found itself involved in the disappearance of the 43 normalistas from the Ayotzinapa Rural Normal School.