“Pa’fuera que van” (“They are going out”) is the cry of thousands of protesters against the government of Danilo Medina. Young people are leading the mobilizations, as they are in Chile and Colombia. 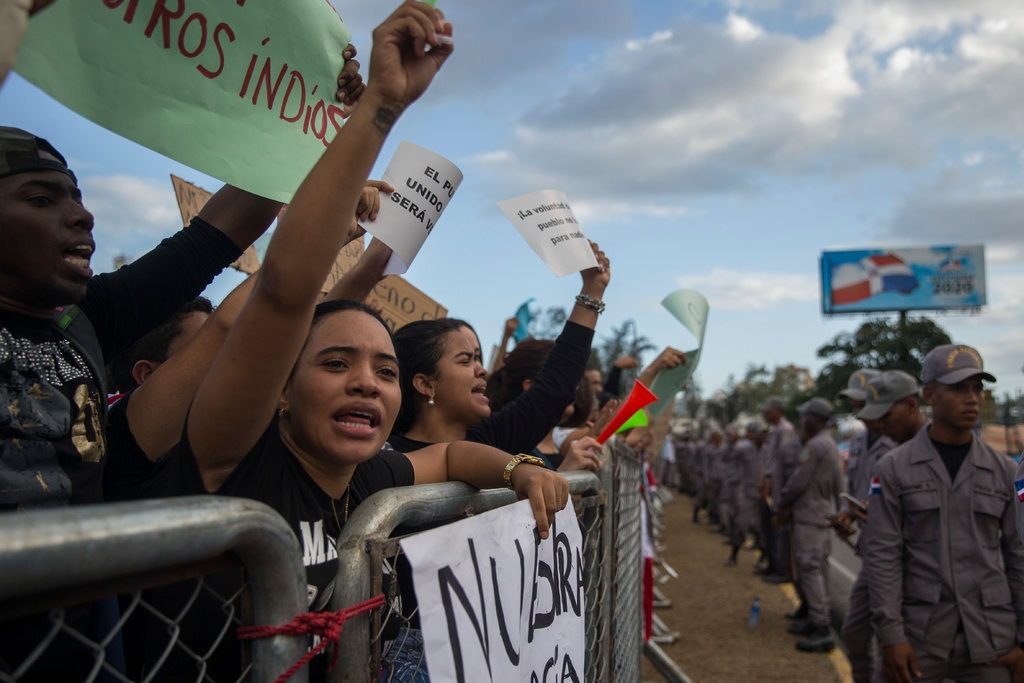 This article was originally published in Spanish on our sister site La Izquierda Diario.

In the largest demonstration in recent weeks in the Dominican Republic, thousands of people took to the streets with their protest cry “Es pa’fuera que van” (“They are going out”), referring to the government of Danilo Medina, the current president of the Dominican Republic. The demonstrations started after the suspension of the municipal elections, following a failed attempt at electoral fraud, but they also reflect the frustration with the corruption rampant in all spheres of government. The call this Thursday was named “Trabucazo 2020,” in reference to the shot that ignited Dominican independence in 1844.

A protest was called to demand an explanation for the annulment of the municipal elections on February 16, which have been rescheduled for March 15, opening a political crisis on the eve of the general elections on May 27. The country is in a great crisis — these mobilizations have continued without cease since they began. Though in a speech on Thursday, Danilo Medina tried to empathize with the outrage expressed by the demonstrations, the suspension of the municipal elections is widely seen as an attempt at electoral fraud by his government.

The Dominican political regime is in a state of decay and acute crisis. The government has consistently served the interests of the employers’ sectors and the Dominican Liberation Party (PLD) has been dominant — the political exhaustion of the regime has reached extremes. The PLD has won in the last four consecutive presidential elections. Leonel Fernéndez served before Danilo Medina and, now separated from the PLD, is attempting to run again.

February 27 is the Dominican Republic’s day of independence, so the spirits of the people were redoubled to go out to the streets. On the night of February 27, 1844, a group of young dissidents were involved in one of the most memorable chapters in Dominican history: they fired a shotgun blast into the legendary Puerta de la Misericordia in Santo Domingo (an event known as the Trabucazo).

What is emblematic of the Trabucazo is the fact that those involved in that chapter of history were young people, and now a new generation of young dissidents is taking advantage of its symbolism to make their outrage felt and to question the leadership of the Dominican government and its institutions, just like the youth we have seen on the streets of Chile or Bogotá in Colombia.

In addition to this Thursday’s larger mobilization, the university students of the Autonomous University of Santo Domingo have also been carrying out marches and protest actions. The majority of those present were young people, as has been the case in other Latin American countries.

On the day of the mobilization, those who came from outside the capital in the early hours of the morning crowded around the centre of Santo Domingo, and stoically endured hours of the Caribbean sun, from which they took shelter under countless umbrellas. The protest also had a festive side, with the participation of the likes of singers such as Juan Luis Guerra, among others.

Although some media point out that the goal of reaching one million people was not reached, this was still the largest of the protests that have taken place, indicating that the crisis in the country, far from being closed, is tending to deepen, even more so as the presidential and parliamentary elections approach.

Following the new Caribbean custom already seen in Puerto Rico, important artists such as Juan Luis Guerra, Vicente García, and Rita Indiana joined the protest with performances of their most famous songs. From Puerto Rico came the support of Bad Bunny (Benito Martinez) and singer Ozuna, who on Thursday joined with the demands already made by some Puerto Rican artists such as Ricky Martin and rapper Residente (Rene Perez) in support of the protests in the Dominican Republic. The activist Sergio Carlo, one of the main promoters of the protest, highlighted how people are fed up with the injustices and inequalities experienced by Dominicans in the country: “It’s over, we are tired of the injustices.”

As the day unfolded and more and more people crowded into the Plaza de la Bandera — a large esplanade in front of the Central Electoral Board (JCE) headquarters that has been the focus of the protests of the past two weeks — Danilo Medina made his annual speech before the (bicameral) National Congress to acknowledge that the political situation is “delicate.”

He cynically stated that he understood this “justified outrage” and he reiterated his support for a “complete investigation” that would provide an “explanation” for the widespread failure of the voting machines that were being used, for the first time, in 18 cities. He failed to address that his government and his party are among the prime suspects.

The opposition parties, most of which are establishment parties, accused the government of being responsible for “constant violations of the Constitution” and a “permanent transgression of the principle of equity” in the elections, with the aim of benefiting the PLD, which has been in power continuously since 2004.

In addition to his failed re-election attempt, Danilo Medina faces divisions within his party, the PLD, as a result of the split by former President Leonel Fernández, who is also running in the presidential elections on May 17, and accusations of corruption against a pro-government candidate, Gonzalo Castillo. With this new crisis and with elections a focus of these mobilizations, everything points to the fact that the fate of Danilo Medina has been cast.

The opposition parties are trying to take advantage of the upcoming presidential elections. This is the case for Luis Abinader’s Modern Revolutionary Party (PRM), and the recently founded People’s Force (FP) of Leonel Fernández, which brings together various political forces such as the Belagueristas of the Social Christian Reformist Party (PRSC), and the Alianza País of Guillermo Moreno, among other political forces.

The mobilizations are continuing to develop and there have been almost 15 days of protests in the midst of a highly unstable political situation. The mobilizations on the island of Puerto Rico are still latent, similar to those in Haiti, which suggests that the Caribbean can be transformed into a region of popular uprisings where the youth are the leaders. But the advancement of the struggle of the Caribbean masses, such as the one taking place and being led by the youth in the Dominican Republic, can only develop and grow as a mobilization independent of all the bosses’ parties, in order to put into perspective a way out for the workers and the exploited.