After four years of organizing and two years of contract negotiations, Columbia graduate workers are poised to strike yet again to win their first contract. 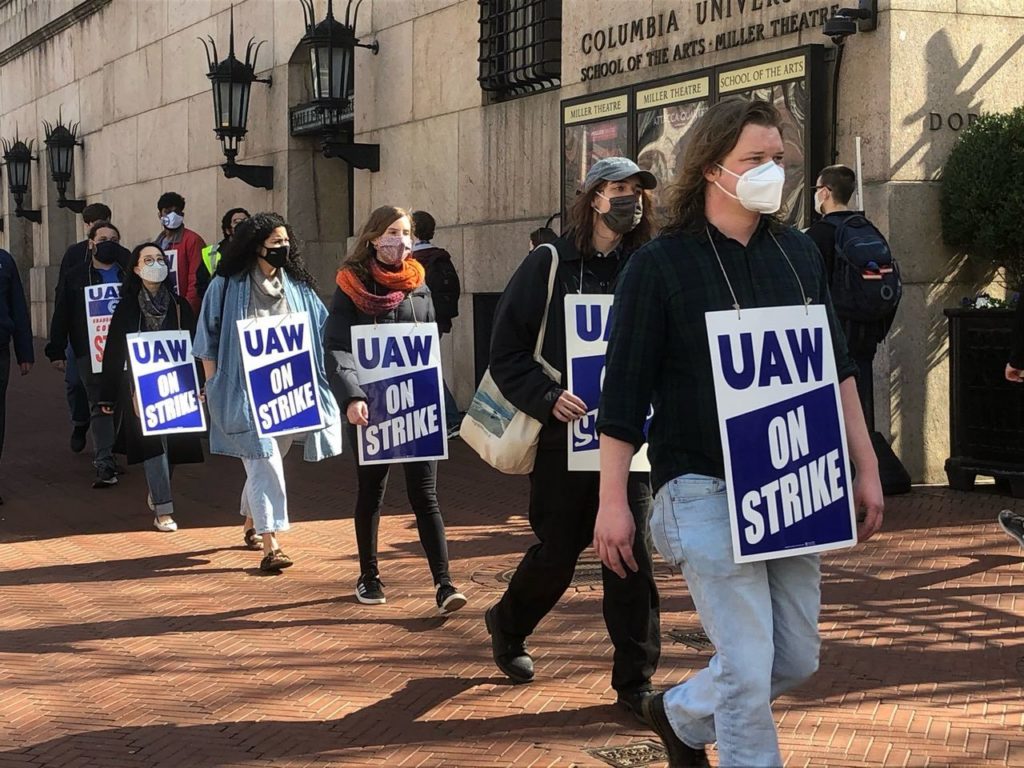 After two years of contract negotiations with the administration, the Graduate Workers of Columbia union (GWC-UAW), which currently represents more than 3,000 research and teaching assistants across the university, are threatening to strike on March 15 if their demands for a fair contract are not met. This strike threat, which was announced in an open letter sent to the University Interim Provost Ira Katznelson on February 1, follows a strike authorization vote held by the union last year, which was overwhelmingly approved by a majority of the bargaining unit.

The escalation towards a strike comes amid intense negotiations between the graduate workers union and the university over wages, healthcare improvements, and grievance and arbitration measures against harassment and racial and sexual discrimination. Among its most ambitious demands, the union is insisting on what it calls a living wage for graduate workers of no less than $41,708 per year. This is hardly enough to live on in New York City, but still far more than the current rate of just $35,140 for a nine month appointment. This demand would represent an 18.7 percent raise, to which Katznelson and the university has offered a cynical counter offer of (that’s right) zero percent. This demand for a living wage echoes the struggle of the UC Santa Cruz graduate students, also represented by the UAW, who went on a wildcat strike in 2019 to demand a cost of living increase from the university.

Claiming that the University’s hands are tied because of financial losses due to the coronavirus pandemic, Katznelson, who happens to also be a well-known labor movement scholar, dismissed the demands, called for “mutual realism,” and said that higher wages were “neither reasonable nor responsible in present circumstances.” The union, for its part, has disputed this argument, calling it a “selective weaponization of austerity.” In contrast, they argue that the costs associated with the demand for higher wages amount to little more than “a rounding error relative to the deficit.” They also point out that the university has already received CARES Act funding and is likely to receive even more federal funding from the latest stimulus package, and that exorbitant administrative salaries have been maintained throughout the pandemic, including the $375,000 and benefits earned by Katznelson.

But two of the most important demands, central to any first contract, also remain unresolved. Since the union was founded in 2014, the university has used high-priced lawyers and a conservative National Labor Relations Board (NLRB) to stall and undermine the union’s efforts to gain legal recognition. Even after the NLRB certified the union in 2017, the university waited almost an entire year before it agreed to sit down at the bargaining table. And since then, it has continued to stall. Columbia has so far not even agreed to the terms of the recognition article, a standard agreement that lays out the parameters of the bargaining unit. Even worse, Katznelson and the university are arguing for an “open shop,” which would mean that the union could only collect dues from graduate employees who voluntarily join the union. This is in contrast to a “closed shop,” where all employees represented by the union are required to pay a fair share of their wages to support the union that supports them. What Katznelson and the university are asking for is similar in many ways to red state right-to-work laws, which are explicitly designed to weaken labor unions.

If graduate workers do go on strike on Monday, it would be the second such action since the union was founded. The first strike, which took place in April of 2018, and was openly supported by several celebrity academics and politicians, was a public relations nightmare for the university. Despite this, that strike ended without winning its main demand: formal recognition of the union by Columbia. It was only after the threat of a second strike the following semester that the university finally was forced to the bargaining table. This welcome development was hampered, however, by the UAW’s last-minute betrayal to include a two-year no-strike clause in the bargaining framework agreed to with the university.

As predicted by many at the time, this framework gave Columbia the upper hand in negotiations, which have now dragged on over 60 bargaining sessions. As Margaret Scarborough, a sixth year PhD candidate in Italian and comparative literature, explained: “there is a tension between the UAW and the bargaining unit, which mostly stems from a fundamental difference in approach. They approach bargaining as a professional relationship with the university, whereas for the unit it’s an antagonistic class struggle. There is a sense that the UAW wants to settle the agreement as soon as possible. There have therefore been times when the UAW has pushed student workers out of the room, in a metaphorical way, and accepted articles that students workers do not support.” This tension between the bureaucrats and the workers they claim to represent shows that even in academia, militant rank and file organizing is the key to any real successful contract.

If the graduate workers at Columbia hope to win a good first contract, they will almost certainly have to go on strike, and at the moment they seem well prepared to do so. The union has organized in person and virtual picketing, and since the university has said it would stop paying graduate employees who participate in the strike, they have also set up a strike assistance fund to help the most vulnerable graduate workers maintain as much of their salaries as possible. This potential strike, however, is not an isolated event. Like elementary school teachers resisting racist austerity policies, or adjunct professors fighting for job security and living wages, these workers are part of a broader struggle across the education sector that includes the great teachers strikes of 2018 and 2019. A successful strike at Columbia would be an inspiration to the many other graduate workers and precarious academic workers across the country to organize to take similar actions to empower themselves, their students, and their communities.