Cops Are Class Enemies. What About Soldiers?

Police officers and soldiers are both being deployed to repress the uprisings across the United States. But while the police remain fiercely loyal to the racist state, soldiers’ allegiance is cracking. This can be observed in protest movements throughout history. Our goal should be to smash the cops, but win over the soldiers. 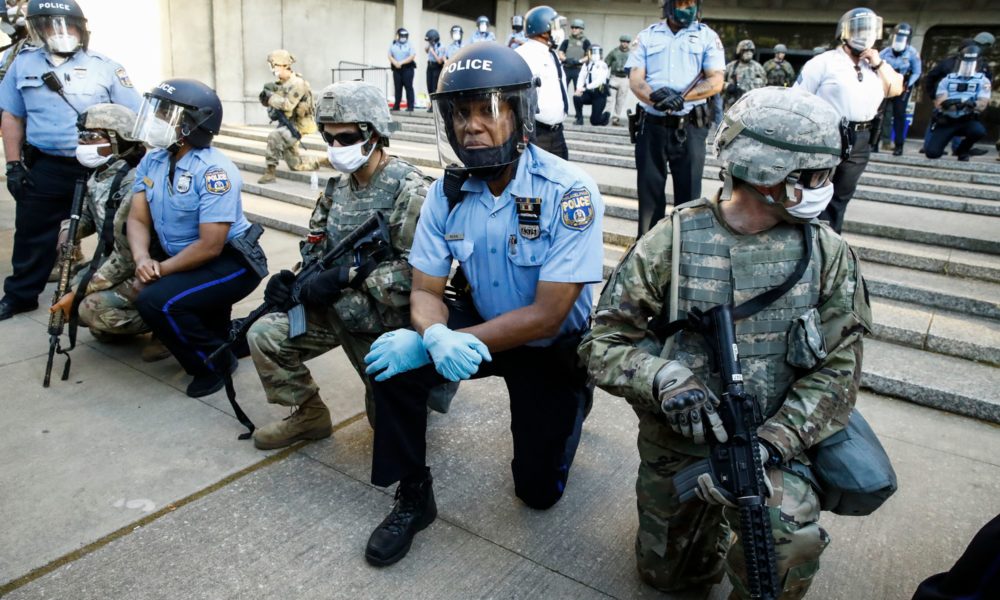 In many ways, police officers and soldiers are similar. They wear uniforms and carry guns. They follow orders from the government. In the United States, their weaponry is not even that different, with the Los Angeles School Police owning grenade launchers and armored vehicles. In recent weeks, both civilian and military forces have been employing batons, pepper spray, pepperballs, flashbang grenades, so-called “rubber bullets,” and tear gas against demonstrators.

But as the uprisings have spread across the United States, a central difference between police officers and soldiers has become clear. Here and there, police might be seen taking a knee in supposed solidarity with the protests, or even linking arms with reformist misleaders of the movement. Yet there have been virtually no cases of police laying down their weapons or joining the protests. The most radical thing police officers have been doing is quitting.

Soldiers, however, have proven completely unreliable for the ruling class. The New York Times, for example, has described National Guard troops — after just a few days! — feeling “demoralized and exhausted.” The bourgeoisie’s “paper of record” quoted one National Guard officer saying:

“It’s a very tough conversation to have when a soldier turns to me and they’re saying, ‘Hey sir, you know my cousin was up there yelling at me, that was my neighbor, my best friend from high school.”

Why are soldiers unwilling to confront their cousins, their neighbors, their friends, but police do not appear to have any problem with it? The police are the professional agents of repression: they have no other skills besides repressing working-class and oppressed people. They are typically “lifers” who have no expectation of doing any other job. On the contrary, they just need to remain loyal to their force in order to receive a pension that most U.S. workers could only dream of. They often live separately, not only from the populations they police, but from society at-large, huddling together in cop families, cop bars, and cop neighborhoods.

The problem with police is not just racist attitudes of individual cops — the problem is an institution made to uphold a racist system.

Many people in the National Guard have normal jobs, and are no more than part-time soldiers. They live most of the time among normal people — and a large majority of people in the U.S. support the ongoing protests, including 54% who felt burning the police station in Minneapolis was justified. They might have signed up to get money for college or because of high-minded (if false) ideals about protecting the American people.

While cops plan to remain cops until they retire, many soldiers are expecting to return to civilian life after just a few years. So soldiers are much closer to the working class. And while cops are in a state of endless war with the working class and all oppressed, most soldiers see themselves on temporary deployments and want to get back to “peace” without getting killed or maimed.

As a result, soldiers can feel deeply conflicted and ashamed when asked to attack protesters who are making totally legitimate demands. This difficulty is compounded by the institutional racism of the U.S. military, where the rank-and-file is full of people of color, while the officer corps is dominated by white men, all following the orders of a racist-in-chief. The military forces of U.S. imperialism murder Black and Brown people around the world to guarantee the profits of U.S. corporations.

This is why small cracks are appearing in the military. Many normal soldiers are reportedly preparing to refuse if they are ordered to repress protests. Even the United States’ top military officer, the chairman of the Joint Chiefs of Staff, has tried to carefully distance himself from the commander in chief: Mark Milly has apologized for joining Trump in his photo op in front of the church. Professional soldiers, and especially officers, are of course closer to cops in terms of their loyalty to the state than reservists are. Soldiers are most likely to rebel in conscript armies. The U.S. military does not rely on a draft, but an “economic draft” forces many working-class people into service.

These same cracks appeared during the last great wave of class struggle in the United States, in the late 1960s and early 1970s. In those times of mass resistance against the Vietnam War, U.S. imperialism, and oppression of all kinds, there are essentially no examples of police officers switching sides. Soldiers, in contrast, entered into increasingly open revolt against the government: joining anti-war demonstrations, refusing to sail out warships, and fragging their officers. The documentary Sir! No Sir! gives a great overview of the many different kinds of resistance.

Liberals and “constitutional” officers will say that U.S. military personnel should be fighting in distant battlefields and not on American streets. But the U.S. military represents the police of imperialism, and the murders they commit are no more legitimate. The “police violence” committed by Marines on distant shores is even more horrific than what happens in U.S. cities. When we oppose soldiers’ presence in Washington D.C., it is not because we think they should instead be controlling the population in Afghanistan, South Korea, or any other country. Rather, we want rank-and-file soldiers to reject the authority of U.S. capitalists, so they can fight for the interests of their own class.

Example from the Russian Revolution

The distinction between police and soldiers can be observed in every revolutionary situation in the history of capitalism. Leon Trotsky, in his monumental History of the Russian Revolution, described how in Petrograd in 1917, workers hated the police, yet were interested in winning over the soldiers and even the Cossacks (a particularly reactionary mounted division):

Throughout the entire day, crowds of people poured from one part of the city to another. They were persistently dispelled by the police, stopped and crowded back by cavalry detachments and occasionally by infantry. Along with shouts of “Down with the police!” was heard oftener and oftener a “Hurrah!” addressed to the Cossacks. That was significant. Toward the police the crowd showed ferocious hatred. They routed the mounted police with whistles, stones, and pieces of ice. In a totally different way the workers approached the soldiers. Around the barracks, sentinels, patrols and lines of soldiers stood groups of working men and women exchanging friendly words with the army men. This was a new stage, due to the growth of the strike and the personal meeting of the worker with the army. Such a stage is inevitable in every revolution. But it always seems new, and does in fact occur differently every time: those who have read and written about it do not recognise the thing when they see it. […] Soon the police disappear altogether – that is, begin to act secretly. Then the soldiers appear, bayonets lowered. Anxiously the workers ask them: “Comrades, you haven’t come to help the police?” A rude “Move along!” for answer. Another attempt ends the same way. The soldiers are sullen. A worm is gnawing them, and they cannot stand it when a question hits the very centre of the pain.

As the revolution developed, the working class had completely different approaches to police and soldiers. Trotsky put it succinctly:

Demonstrating workers will approach the soldiers directly and call on them to join the revolutionary movement:

The masses try to get near them, look into their eyes, surround them with their hot breath. A great role is played by women workers in the relationship between workers and soldiers. They go up to the cordons more boldly than men, take hold of the rifles, beseech, almost command: “Put down your bayonets – join us.” The soldiers are excited, ashamed, exchange anxious glances, waver; someone makes up his mind first, and the bayonets rise guiltily above the shoulders of the advancing crowd. The barrier is opened, a joyous and grateful “Hurrah!” shakes the air. The soldiers are surrounded. Everywhere arguments, reproaches, appeals – the revolution makes another forward step.

There are, unfortunately, some socialists who have not drawn this lesson of history and consider cops to be part of the working class. They suggest that cops can be won over just like soldiers. Other socialists make the opposite mistake and consider rank-and-file soldiers to be as irredeemably reactionary as cops. But in the long history of revolutions, soldiers have often joined the struggle, forming soldiers’ committees that fight alongside the workers and oppressed. In contrast, there has never been a single case where police have switched sides.

Police deserve nothing but our hostility. We should fight to defund, disarm, and disband them, kick them out of our unions, strip them of power, burn down their precincts, and politically isolate them. But we should approach soldiers (especially reservists), talk to them, ask them if they are happy protecting a racist government, or if they would not rather join the protests themselves. We should ask if they want to kill or die to protect the interests of U.S. corporations.

So while we want to break up cop “unions,” which have always been incredibly reactionary, we should be in favor of democratic organizations for rank-and-file soldiers. We should defend soldiers’ rights to free expression and organization, and to resist the arbitrary rule of their officers.

Alongside unconvincing attempts to shoehorn themselves into an anti-police movement, cops have only doubled-down on their reactionary attitudes. At the same time, cracks are showing in the U.S. military, and particularly in the reserves. The movement needs to rip those cracks wide open.