On September 12 left-wing Labour MP Jeremy Corbyn was elected leader of the Labour Party with 59.5% of the vote. This remarkable landslide victory is a clear sign of resistance to the cuts, austerity, racism and war pursued by successive British governments. It is also a humiliating defeat for the centre and the right wing of the Labour Party. 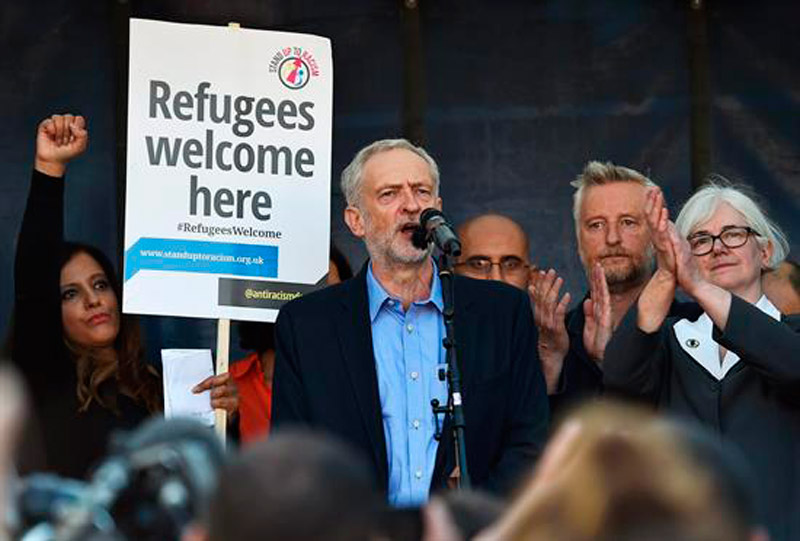 When Jeremy Corbyn entered the leadership contest at the beginning of June nobody thought that he stood a chance. However his campaign unexpectedly took flight and since then the tabloid press, the Blairites within the party and even the Conservatives have made every attempt to undermine and discredit his politics.

His election marks a major turning point for British politics. It sends out a strong message against the Thatcherite neoliberal policies pursued by Tony Blair after he was elected in 1997, policies which have been stepped-up under the current majority Conservative government. Following the heavy election defeat in May, most Labour MPs and the entire party leadership thought that the only way of getting back into government was to triangulate even further to the right.

However, the result showed that this view has been comprehensively rejected by the rank and file. Liz Kendal, the openly Blairite candidate, only obtained 4% of the vote, while Andy Burnham and Yvette Cooper obtained 19% and 17% respectively. In addition to this, on September 11, the results of the ballot to choose the Labour candidate for next year’s London mayoral elections were announced and the Blairite candidate, Tessa Jowell, was also heavily defeated.

Corbyn won with an overwhelming 84% of the vote among the Labour Party’s recent influx of supporters – that is to say, those who registered to vote in the leadership contest by paying a nominal £3 fee. Among members of affiliated unions he won just under 60% of the vote and even among the long-standing full members he took just under 50%. These figures demonstrate clearly that people expressly registered as party supporters not because they had expectations in the then Labour leadership, but because they saw in Corbyn a way to express their indignation at austerity and military intervention in the Middle East — wanting to transform Labour into an organisation that represents progressive policies.

Discontent with neoliberal policies has been building up since the financial crisis of 2007-8 and many hundreds of thousands have taken to the streets since then. On June 20, almost 500,000 people marched through London against public spending cuts, zero hour contracts and rising education fees. However, these protests have had only limited success in changing government policy and it now seems that, among young people in particular, there is a turn towards seeking alternative solutions through Corbyn’s candidacy.

The interesting thing is that Corbyn benefited from the election reforms introduced in 2013 by Ed Miliband. The ‘one member one vote’ system was a compromise solution proposed by the former leader who faced strident demands from the right wing to undermine the influence of the trade unions in the leadership election by attracting the more “moderate” voice of the general public through primary elections.

According to The Guardian about 400,000 people registered to vote in the contest since the general election in May this year, swelling the electorate to almost 600,000. It is now clear that the overwhelming majority of them registered in order to be able to vote for Corbyn.

Corbyn’s campaign attracted an army of 16,000 volunteers, most of them young people, who organised meetings around the country, prepared and distributed leaflets, and contacted party members by phone, email and social media. In striking contrast to this, Yvette Cooper had 4,300 volunteers, Andy Burnham 3,000, and Liz Kendall 1,800.

Some commentators describe the situation as a political earthquake. There is no doubt that Corbyn will immediately face a battle with the right wing of the party. He is now trying to form his shadow cabinet of opposition spokespeople and some senior MPs have already rejected serving under his leadership. Ardent pro-European right-winger Chuka Umunna, who clearly has his sights set on winning the leadership in the future, resigned from his frontbench position, arguing that Corbyn’s position on the European Union is ambiguous.

On the other hand, many ex-members of the Labour Party are re-joining after having abandoned it during the Blair era over the Iraq war or over the amending of Clause Four of the Party Constitution to remove the party’s commitment to public ownership. Corbyn has the support of the unions, including Unite, Britain’s largest with almost 1.5 million members, whose general secretary, Len McCluskey, has ensured strong support for opposition to the government’s reactionary new trade union bill.

Corbyn has never voted in favour of any form of military intervention by Western forces, defends the Palestinians, and has supported every demonstration against austerity. However he thinks that socialism can be achieved through parliament and describes himself as a ‘democratic socialist’, not a ‘revolutionary socialist’.

Many people have high expectations of him as leader of the Labour Party due to his record of 32 years as a left-wing MP, and his supporters argue that he can pull the Labour Party to the left. However, he now has the difficult task of uniting a party which is increasingly polarised, and preparing for the 2020 general elections. Ranged against him is the UK establishment and most of the press, with the Daily Mail leading the charge: “Corbyn gives top job to IRA sympathiser”, declares its front-page headline on September 14, in reference to the appointment of John McDonnell as shadow Chancellor. David Cameron also went onto the attack, saying that the “Labour Party is a threat to our national security, our economic security and your family’s values”.

Corbyn’s manifesto includes progressive demands [see box], but they don’t amount to a revolutionary programme. In fact his programme is rather general, as he himself has declared: “My candidacy marks the launch of a broader anti-austerity movement to shift the terms of political debate in this country by presenting an alternative to the socially devastating and widely discredited austerity agenda.”

A thorny issue in the relations between the United Kingdom and Argentina is the sovereignty of the Malvinas islands. Corbyn opposed the 1982 invasion of the islands by the Argentinean dictatorship while also opposing the sending of the British taskforce. He is member of the “Malvinas Pro-dialogue Group” and declared that there has to be a move towards “real peace” and that Britain must open a “dialogue” with Argentina over the future of the islands.

After many decades of neoliberal policies there is a new mood among workers and young people. It remains to be seen whether this can be transformed into a fighting movement that counters the attacks of the capitalists and builds a political alternative which is powerful and organised enough to defend the interests of the working class.

Britain is not Greece – there is no doubt about that. However the example of Syriza and many others show that in order to reverse austerity and privatisations and to introduce even mild reforms we will have to confront the resistance of the big capitalists and financial institutions.

Create a new national investment bank to encourage growth and reduce the deficit.
Public ownership of the railway and energy sector.
Replace Trident with jobs that retain the skills of the workers.
Reduce the welfare bill through growth and investment.
Massively increase building of social housing and introduce rent controls in the private sector.
Integrate social care with medical care to create a new NHS.
Provide free universal childcare, scrap student fees, restore student grants and funding for continuing education for adults.
Abolish zero hours contracts and introduce a national living wage for all, regardless of age.