Faculty at the City University of New York are facing massive layoffs in the fall, but the PSC CUNY union that represents them has so far done little to resist, choosing instead to silence many of its most active and engaged members. 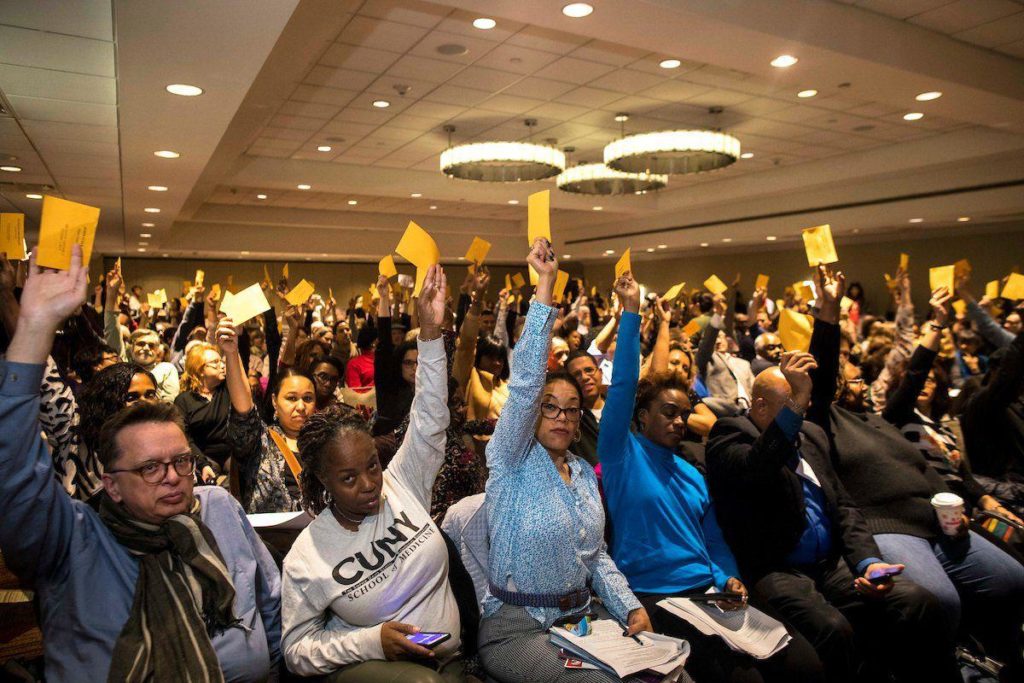 Colleges across the City University of New York (CUNY) are threatening or have already begun to lay off hundreds of faculty and staff in response to presumed budget cuts and lower enrollments in the fall. These layoffs will leave up to 40% of faculty at some campuses without jobs and many without health insurance during a global pandemic. In response, the Professional Staff Congress (PSC-CUNY), the union that represents faculty and staff across the university, has offered little resistance. Rather than building the power to confront these layoffs through work actions or strikes, they have instead focused their energies on lobbying and closed-door negotiations, and have sought to silence those union members that are clamoring for more radical action.

Although the leadership of the union has done little to resist these cuts and layoffs, the rank and file, on the other hand, have already begun organizing for work actions. Since Monday, hundreds of faculty across the university have been signing on to withhold their spring grades until the last day and join together in a wildcat grade strike if there is enough support by May 28. In addition, union and student groups across the university’s 25 campuses are increasingly mobilized and ready for action. Several union chapters have held emergency meetings, a “PhD SOS” group has sprung up at the Graduate Center, and the student-led group Free CUNY has released their own set of pandemic demands. The growing segment of militant rank and file workers at CUNY (and at other universities across the country) are showing their determination to fight back the attacks against higher education, but they are being betrayed at every turn by their union leadership.

The PSC has been engaging in anti-democratic and demobilizing tactics for many years. They bargain with management behind closed doors with very limited transparency, and members are excluded from any discussions of tactics or strategy. Members are asked to send letters to their legislators or participate in other lobbying activities, but little else. The union’s delegate assembly (DA) is supposed to be representative of the membership, but it is disproportionately composed of full time faculty, leaving part time faculty, staff, and graduate students with limited ability to advocate for their needs and views.

The PSC’s delegate assembly meeting on May 21 was an especially important meeting, given the rampant cuts to part time faculty and staff that had been announced even just in the days since the emergency DA meeting on May 11. Spring semester grades are due on May 28, and non-appointment letters are scheduled to go out the following day, right after management has extracted the final bit of labor for the semester. The timeline to save part timers’ jobs is therefore extremely limited, and maximum engagement and direct action is necessary. During Thursday’s meeting, the leadership did signal that they may be open to moving toward work action in the fall, but by then, it will be far too late.

However, during this important meeting, attended by more than 200 members, the union leadership continued to demobilize mass participation in union matters, first by disabling the meeting’s chat room. At the previous DA meeting, the chat had been instrumental for the rank and file to call out anti-democratic proceedings and bring attention to delegates’ motions after they were ignored by the leadership. Furthermore, because only delegates are typically allowed to speak out loud, the chat is essentially the only way non-elected rank-and-file members can participate in a digital meeting. At least in an in person meeting, they can shout and wave signs until they are forced to leave. In this, the union bureaucracy was reminiscent of the management, who employed similar silencing tactics when they met with graduate students on Wednesday afternoon. This parallel is not coincidental. Bureaucrats have a vested interest in maintaining their own power and reputation, even and perhaps especially at the expense of the workers they claim to fight for. Their interests are not our interests, as was made abundantly clear at the latest meeting of the PSC.

From the very beginning of the meeting, members demanded the chat be reopened. First, union president Barbara Bowen refused to discuss the matter because the meeting hadn’t started yet. Then, she refused to discuss the matter because it wasn’t on the agenda. When members asked when it would be appropriate to propose a resolution to open the chat, Bowen repeatedly refused to answer. When the issue was finally discussed, Bowen insisted on speaking against it herself. The results were very close (70/68 opposed) and ambiguous, since some people lowered their hands while counting was still taking place. Non-delegate rank-and-file members were not allowed to vote on their own right to participate.

Because the vote was so close, leadership intended to move to a roll call vote, and chaos ensued. The leadership had force-muted all participants, so delegates could not unmute themselves when their names were called. When leadership mass-unmuted all participants to return muting power to each individual, there was significant background noise. In face of the chaos, Bowen unilaterally decided to abandon the roll call vote entirely. One member pointed out that this could have been avoided, if they had only opened the chat and asked delegates to type their votes.

During this process, leadership repeatedly complained about wasting time, and used this as a rationale for superseding normal procedures, yet they also insisted on arguing procedural nuances when it served their agenda. This bias was particularly evident when the DA reconsidered the proposal to withhold grades that was obstructed at the previous meeting. Leadership exclusively called on “against” speakers for the entire time allotted for discussion, only allowing someone to speak in favor after several delegates protested. In the end, the resolution failed once again. Even after a lawyer clarified that the resolution did not violate the Taylor Law, the PSC union bureaucracy and their delegate supporters were unwilling to engage in collective job actions to save the livelihoods and health of their members.

CUNY’s rank and file needs to acknowledge that if the PSC leadership is not going to call for radical action now, when thousands of workers are losing their jobs and their health insurance, then they never really had our interests at heart in the first place. The events of Thursday’s DA are a betrayal, but they should come as no surprise. As last year’s contract fight for $7k for adjuncts showed, they will always collaborate with management in the end and settle for scraps rather than take bold steps to actually improve workers’ lives by any substantial amount. Grades are now due in one week, and CUNY’s adjuncts are scheduled to receive their non-appointment letters the day after. Now is the time for militant action, with or without the leadership.