ReeAnna, a trans woman, was arrested at Philadelphia Pride for attempting to burn a Blue Lives Matter flag. She was held in a men’s prison overnight and is being charged with two misdemeanors by District Attorney Larry Krasner’s office. If convicted, she could face up to seven years in prison. 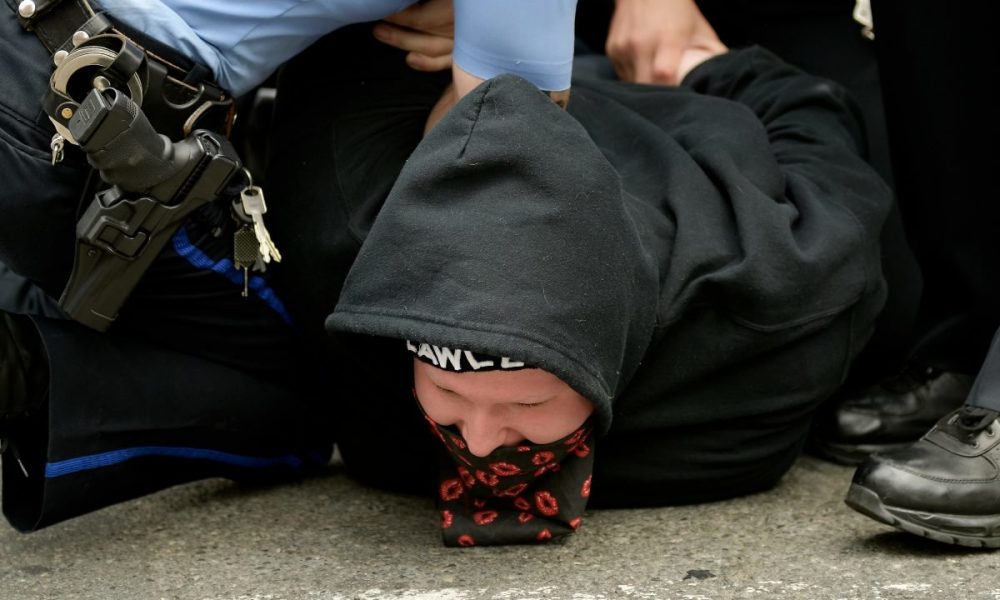 Image by BASTIAAN SLABBERS FOR THE INQUIRER

On June 10th, during the Philadelphia Pride parade, ReeAnna Segin, a trans woman, allegedly attempted to set fire to a Blue Lives Matter flag. She was brutally arrested, referred to by male pronouns, and then made to spend the night in a men’s prison before she was released on bail. The Philadelphia DA’s office of Larry Krasner, the “progressive” endorsed by the Democratic Socialists of America, has charged her with two misdemeanor counts.

Philly Socialists and other groups will be held a press conference at City Hall on Wednesday, June 20th at 10 am to demand that the District Attorney’s office drop all charges against ReeAnna and to demand an end to police participation in Philly Pride. 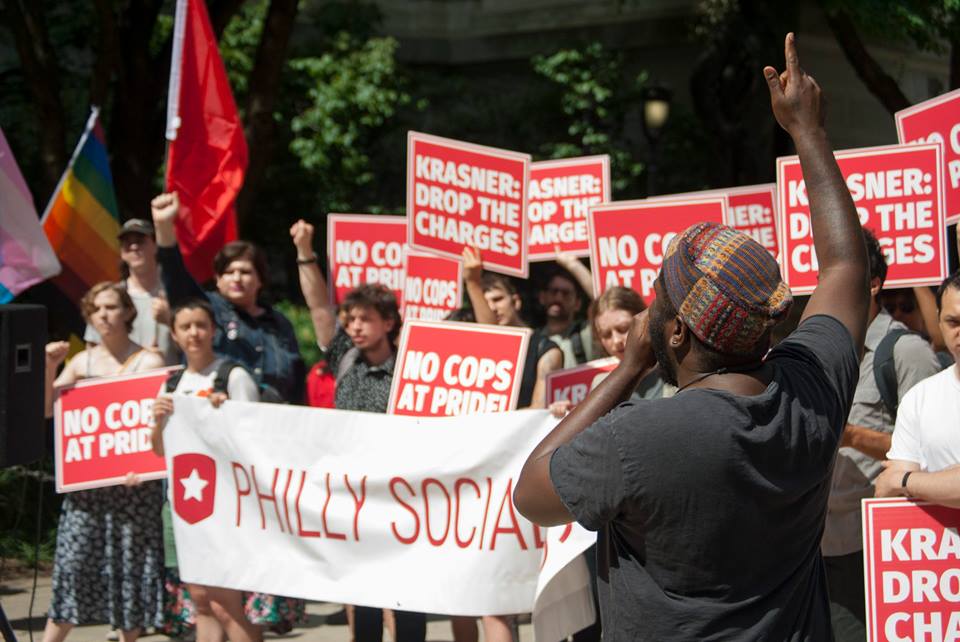 The rally organized by Philly Socialists and other activist groups in front of City Hall.

No Cops at Pride

LGBT Pride month celebrates the Stonewall riots, where LGBT people, mostly of color, gender non-conforming and trans, rebelled against the police who were systematically humiliating, imprisoning, beating, and raping queer people. Trans women of color such as Sylvia Rivera and Marsha P. Johnson had enough, and on June 28, alongside hundreds of other LGBT people, fought back against the police, instigating a riot that lasted days.

You may be interested in: Rainbows on Their Cars But Blood On Their Hands: No Cops at Pride

The repressive nature of the police is evident by the brutal arrest of Segin. They threw her on the ground and handcuffed her, all while deadnaming her repeatedly. “A lot of people don’t realize that cops have historically arrested and assaulted queer people, and they still treat LGBTQ people so horribly through their system,” Segin said. “Police can never be seen as part of a safe environment for Pride if police are actively and brutally misgendering and mistreating queer people in the system.”

It was true at Stonewall, and it is true today: Blue lives are the enemy of oppressed people.

A Leftist District Attorney is an Oxymoron

Similarly, District Attorneys are enemies of oppressed and working-class people.

The events that unfolded in Philadelphia may be surprising to some because the DA is none other than “leftist” Larry Krasner. Krasner’s election was hailed as turning a new page in Philadelphia’s criminal justice system because he promised to dismantle mass incarceration from within through various reforms. He has a 30-year record as a Civil Rights lawyer and even defended Black Lives Matter protesters. As a result, much of the left rallied behind him, including the Philadelphia DSA, who not only sponsored him, but also campaigned for him.

An article published on the DSA web-page on June 7th, only three days before Segin was arrested, reads “Philadelphia made history in November 2017, when a labor-backed multiracial coalition proudly elected movement activist Larry Krasner as Philadelphia District Attorney on a platform of ending mass incarceration, protecting immigrants, and confronting abusive police. Krasner’s victory showed the world the collective power that Philadelphians have when we rally together, electing somebody who fights for us. LILAC (Local Initiative/Local Action Committee) envisions a socialist struggle that can collaborate with local fights like the Krasner campaign.” In this sense, the DSA sees Krasner as evidence of working-class power, as someone who is on the side of the working class and as a model for organizing in Philadelphia. The local fight highlighted is not an actual fight, but an electoral campaign for someone running in a capitalist political party.

Once elected, Krasner made some progressive moves, like ending criminal prosecution for marijuana possession, forcing prosecutors to end the practice of extorting bail money from those accused of minor crimes, and even filing a lawsuit against pharmaceutical companies that have been accused of responsibility in the opioid epidemic. However, his effort to review past sentences has been blocked by judges, demonstrating the limits of electing someone to “make a change from within.” Reform doesn’t happen by electing people, it happens by organizing a mass movement.

And then there are the right-wing measures. For one, Krasner’s transition team included “tough on crime” District Attorney Ronald Castille, who secured 45 death penalty convictions during his time as Philadelphia DA. There is also the refusal to release Mumia Abu-Jamal, whose health has been in decline for years due to cirrhosis as a result of mistreated Hepatitis-C. And now, there is the arrest and prosecution of ReeAnna Segin.

Although it is undeniable that Krasner is incarcerating far less people than his predecessors, as socialists, we don’t vote for less people of color and working-class people to be arrested. We fight against the “justice” system used almost exclusively against people of color and working-class people. Now that Krasner is DA, the arrests have not stopped. He is in charge of arresting, charging, and keeping people in prison. He is managing and executing the repressive mechanism of the state that continues to overpolice communities of color and lock up the city’s Black population at exorbitant rates– even though these rates have dropped.

It’s particularly telling that after pledging to end cash bail for “minor offenses,” his office held Segin until she could make bail. Apparently, challenging even the most racist and reactionary cop slogan by symbolically destroying a flag is not considered by the DA’s office to be a “minor offense,” revealing the priorities and nature of the job of the District Attorney.

You may be interested in: Cop Organizers Aren’t Comrades

To the credit of the South Jersey DSA, they put out a statement speaking out against the arrest, calling for a Pride without police and calling on Krasner to drop all charges. The Philadelphia DSA has not released a statement.

Yet, those leftists who enthusiastically supported Krasner must examine the roots of the political mistake. It can’t be that one day Krasner is someone who “fights for us” and the next day, the District Attorney’s office moves forward with charges against a woman who tried to burn a Blue Lives Matter flag (which is legal!), allowing the police to put her in a men’s prison.

At the center of the debate is the fact that the capitalist State is not “an empty sack which one can undisturbedly fill with any kind of class content,” as Trotsky explains in 90 Years of the Communist Manifesto. In this sense, you cannot just elect your way out of capitalism, out of repression, and out of the kind of brutal treatment that Segin suffered. You cannot administer the capitalist State in a way that is socialist. In this sense, it is entirely impossible to change the nature of the job of District Attorney– to prosecute and imprison overwhelmingly working-class people of color. The “justice system,”like the entire State, has a class. It’s at the service of the capitalists. Krasner demonstrates that good intentions cannot change the nature of the justice system– it is a weapon against people who are Black, queer, immigrant, working class and marginalized.

This terrible position of Krasner’s is an inevitable product of his job to enforce the laws of the capitalist state. The question for those of us who are horrified by the prison system and fight against the police is: How can we organize an independent force of the working class that doesn’t give us false illusions of a nicer and gentler capitalism but organizes with righteous anger and fury against a system meant to crush us, the working class and oppressed.