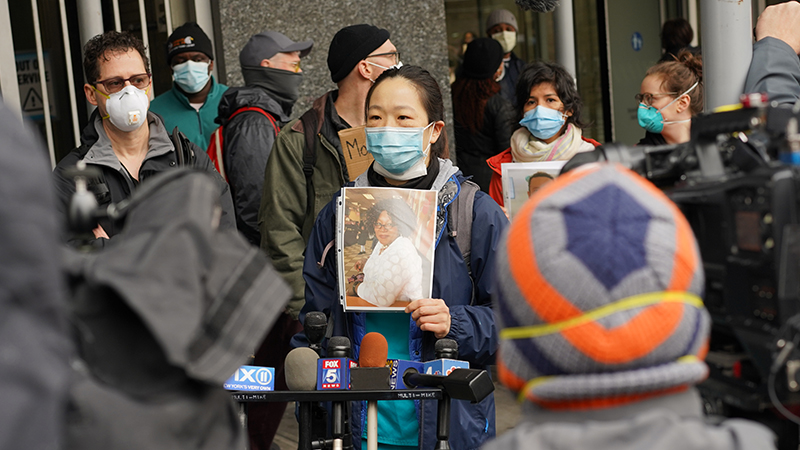 Today, nurses along with other frontline workers came together at Mount Sinai Hospital in Harlem to make their voices heard concerning the urgent need for personal protective equipment (PPE) — which they’ve been denied access to by government officials, union leaders, and hospital administrators alike.

The newly formed COVID-19 Frontline Workers Task Force organized this action and urged workers at other essential workplaces in danger of contracting coronavirus to form similar health and safety committees for more democratic decision-making as the current pandemic exposes the crisis of leadership from the hospitals here in New York to the national government.

Democracy Now! spoke with ICU nurse and Left Voice editorial board member Tre Kwon who was part of the efforts of today’s action. Kwon described the situation on the ground:

We’re in front of the emergency room here. We’re spilling out into the sidewalk to demand protective personal equipment, ventilators and adequate safety protocol for healthcare workers on the frontline. We formed this task force because the whole saying of, you know, “We’re all in this together,” that Cuomo, Trump and other politicians and even CEOs are claiming, is totally bogus. We are the ones who have our bodies on the line. We are the ones who are putting our families at risk and ourselves at risk at our job.

The workers at this demonstration also called out the $2 trillion stimulus package that provided a lifeline to big corporations while frontline workers are forced to bleed dry, separate from their families to reduce the risk of exposure and die after being forced to reuse masks — if they even have access to them. It’s clear that the working class is bearing the brunt of this man-made crisis of capitalism. As Kwon told Democracy Now!

What’s really necessary is that manufacturing industry needs to be nationalized and put under total public control — actually, democratic workers’ control. That would be the only rational way to respond to this crisis. GM — all these corporations are sitting around waiting for their package from the federal government…But ultimately, what is required is centralized, coordinated planning, but not under the hands of Trump. Trump is yet another billionaire boss bigot who’s also looking out for his own interests. It really needs to be under the control of the public, the working class.

Dozens of media outlets covered the courageous actions of these workers who risked their jobs to speak out as part of a string of actions by healthcare workers and wave of class struggle taking place all over the country to demand immediate action as the ravages of coronavirus fully take hold here in the U.S.

Hear more of what Tre Kwon had to say below.

In NYC, frontline medical staff are protesting the severe shortage of personal protective equipment as hospitals are overwhelmed by COVID-19 cases. “We are the ones who have our bodies on the line,” says ICU nurse @Tre_Kwon from the protest. “We’re demanding attention now.” pic.twitter.com/bv8SXUeato