Democrats Team Up With Trump to Maintain Disastrous Healthcare System

Both Republicans and Democrats have blocked all attempts to build a rational, universal health care policy for the U.S. This is because capitalism prioritizes profit over the health and well-being of the working class. Creating a truly just health care system will require moving beyond capitalism. 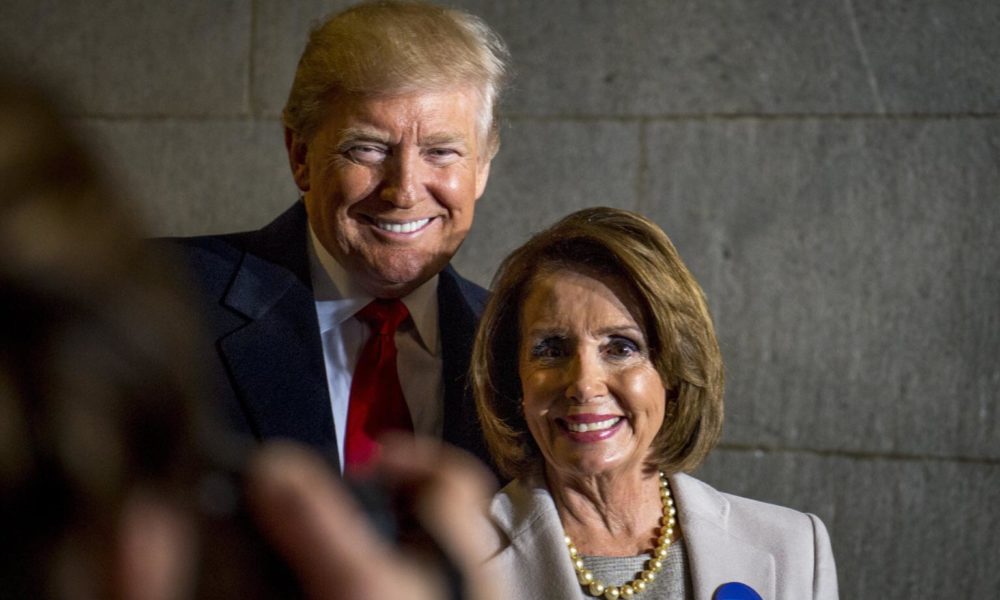 On Tuesday, February 4, Donald Trump delivered his third State of the Union (SOTU) address. As expected, it was filled with contradictions, falsehoods, and distortions. Among other things, Trump spoke for close to ten minutes about health care in the U.S., claiming that he “will always protect Medicare.” However, neither Trump and the Republicans, nor the Democrats can be trusted when it comes to health care.

Just last week, for example, at the World Economic Forum in Davos, Switzerland, Trump suggested he would think about cutting Medicare and Social Security to reduce the federal deficit. The Trump administration also recently announced it would take steps to overhaul Medicaid through a program ironically named “Healthy Adult Opportunity,” allowing states to choose to cut federal government funding they receive at a lump sum or block grant instead of paying a fixed percentage of costs. The goal is for states to reduce spending by decreasing health provider reimbursements, limiting drug coverage, or making it difficult for individuals to qualify for care. Trump’s plans for his 2021 budget are lockstep with his previous statements and would increase military spending while cutting Medicare and Medicaid.

Despite Trump’s SOTU remarks, his recent proposals should be no shock when one looks at who he tapped to oversee the distribution of healthcare in the United States. Seema Verma, who helped announce the “Healthy Adult Opportunity” program, serves as head administrator of the Centers for Medicare and Medicaid Services (CMS). Prior to being appointed to her position, Verma was President, CEO and founder of SVC, Inc., a national health policy consulting company which helped drive Republican state-level Medicaid reforms while also encouraging state outsourcing to private companies converting government funding into private profits. Since taking office, Verma has been instrumental in allowing states to institute work requirements—essentially requiring Medicaid beneficiaries to prove they are working, by logging work hours regardless of computer or internet access, in order to get health care. She has also railed against universal health care, stating National Improved Medicare for All (NIMA) would “strip choice away from millions.”

Trump’s initial Health and Human Services (HHS) Secretary, Tom Price—who resigned in 2017 after it was revealed that he used taxpayer money on personal travel—sponsored congressional budgets to turn Medicaid into a block grant program. Now-current HHS Secretary Alex Azar, sworn into office in 2018, was former head of the pharmaceutical corporation Eli Lilly and played a key role in driving up prices of crucial medicines, such as insulin, to increase profits. Individuals like Azar have proven time and again that they will not work to “lower drug prices” as Trump touted in his SOTU. Instead, Azar will defend the corporate elite; his new government position puts him in a perfect place to do just that. With individuals such as these heading the US healthcare system, it is no wonder such policies are being proposed.

While some members of the Democratic Party will want to condemn or distance themselves from these efforts, it is important to note their culpability in helping create the environment for Trump’s current policy proposals. For example, cutting safety net programs that working people rely on is not new for Democrats. As The Intercept recently reported, “As early as 1984 and as recently as 2018, former Vice President Joe Biden called for cuts to Social Security in the name of saving the program and balancing the federal budget.” Biden advocated for freezing spending on “every single solitary thing in the government” including Medicare, Medicaid, and veterans’ benefits.

And Joe Biden is not an outlier. Under the capitalist system, advocating for programs of “austerity” to combat the crises that are built into the system is standard practice. Austerity is often recommended despite evidence suggesting government cuts typically worsen economic downturns. Professor of Economics, Richard Wolff, has analyzed how this system functions, arguing that in times of economic growth, austerity is capitalists’ preferred policy: it means less taxes and thus more profits for them. In times of economic downturn, however, they are the first beneficiaries of state-sponsored bailouts, which require governments to run massive budget deficits.

The cycle Wolff describes only benefits the rich—Democrats and Republicans alike play into it. Despite their rhetoric to the contrary, the Democrats advocate for austerity just as Republicans do, because ultimately they are beholden to the same capitalist interests that run the country.

It should be also noted that the entire distribution of health care under the current for-profit model allows for continued cuts and alterations to programs such as Medicare and Medicaid to occur. Dominated by the interests of the medical-industrial complex, leaders of the Democratic party have never articulated the vision that health care should be a human right and the profit motive should be removed from health care. They have never been able to collectively articulate that National Improved Medicare for All (NIMA) is the only path to a relatively rational health care system.

Obama was not only not able to garner support for NIMA, but gave up even the modest reform of a public option when advocating for the Affordable Care Act (ACA). While the ACA did expand Medicaid coverage, Democrats have attempted to frame its passage as a colossal win and this is simply not the case. The ACA mandates individuals purchase insurance from private, for-profit insurance companies, and still leaves 31 million Americans out of coverage. This has created  a situation in which being underinsured  is quickly becoming the new normal. The bill was really anything but a win for the majority of Americans.

Trump also spent part of his SOTU bashing NIMA proposals calling them a “socialist takeover of the healthcare system that would disrupt the care of many “happy Americans.” One would think that today with various polls showing a majority of the public now wants Medicare for All, Democrats would oppose Trump’s rhetoric and advocate for such policy. Unfortunately, Democratic elites still refuse to accept NIMA’s popularity. Instead of getting uniformly behind universal health care, we have seen proposals ranging from strengthening the ACA (Biden) to proposals resembling a public option (Buttigieg).

Warren and Sanders have been the only two candidates who have had the courage to advocate going further to Medicare for All. Faced with conservative backlash, however, Warren has considerably back-pedaled on her Medicare for All rhetoric, now saying she would wait until at least her third year in office to attempt implementation. As for the proposed “leader” of the party, House Speaker, Nancy Pelosi, it was reported as recently as 2019 that her top policy aide was meeting with Blue Cross Blue Shield executives and assuring them they did not have to worry about Medicare for All. It appears Pelosi believes her energies would be better suited feigning progressiveness by ripping up Trump’s speeches, rather than actively opposing his poor health care policies by supporting the movement for NIMA.

Often Democrats and Republicans alike who are opposed to the NIMA claim it would be too costly. Various versions of “how we are going to pay for it?” are brought up over and over. Even if one ignores the fact that 30 years of single payer research shows NIMA would save money compared to the status quo, it is peculiar this same argument is not used when discussing funding for instruments of suffering, death, and destruction. The same conversation is never had when talking about providing tax incentives for large capitalist institutions to continue to oppress workers and destroy the planet. The same conversation was not had after 188 Democrats recently joined with Republicans to approve a $738 billion military budget—a budget which upholds the US military contributing more to pending climate collapse then 140 countries combined. The same conversation was not had after the Pentagon failed its first ever audit in 2018 and mysteriously could not account for $21 trillion dollars from 1998 to 2015.

NIMA: A Step Forward for the Working Class

As we have argued in the past, NIMA would be a large step forward for the working class. Currently close to 50% of the US population obtains their healthcare through their employers. This keeps workers in a vulnerable position when it comes to organizing in the workplace, because if a worker loses their job, they and their  family could lose health care coverage, which can be devastating for those with chronic conditions such as diabetes, heart disease, or various forms of cancer.

Not having NIMA also puts the public at the mercy of large insurance companies, hospital corporations, and pharmaceutical companies whose number one priority is profit maximization. This leads to companies trying to raise prices for the “product” as much as possible, which leaves the public in an economically precarious position. Today some 70 million Americans are struggling to pay off medical debt, and medical debt is the number one cause of bankruptcy in the country. A sudden illness in the US can mean financial ruin. A 2018 study in the American Journal of Medicine (AJM) found almost half of cancer patients studied depleted their entire life savings by the second year of treatment. The financial burden that illness can cause on working-class families under the current for-profit health care—or, put differently, the “exploitation of illness”—is nothing short of outrageous. It shackles working people and keeps them focused on struggling with not only their illness, but also their debt.

The Need to Go Beyond National Improved Medicare for All

The left needs to not only oppose the Trump administration’s current proposals, but advocate for National Improved Medicare for All (NIMA) and for health care for all as a human right. At the same time connections must be made to the dynamics of capitalism and imperialism continually benefitting capitalists at expense of us all. The current revolving door system that operates as a result of wealth and power concentration inside capitalism, allows executives from exploitative institutions to continually guide the policy of both Republicans and Democrats. This only reiterates the need to move beyond a two party system structured to benefit the ruling class. In order to take on the vested interests of the medical industrial complex and provide health care each of us wants and needs, we must overcome an economic system based on exploitation and oppression. This system damages the health and well-being not just of humans, but all life systems on our planet. Only once we can transcend capitalism will we have not only a truly just health care system, but a society that prioritizes life and health over capital accumulation.