Detroit Police Put BLM Leader in a Chokehold, Call It a “Two-Hand Restraint”

The Detroit Police put protest leader Nakia Wallace in a chokehold. They are now calling it a “two-hand restraint.” This whitewashing is part of a broader attack on the movement in Detroit. 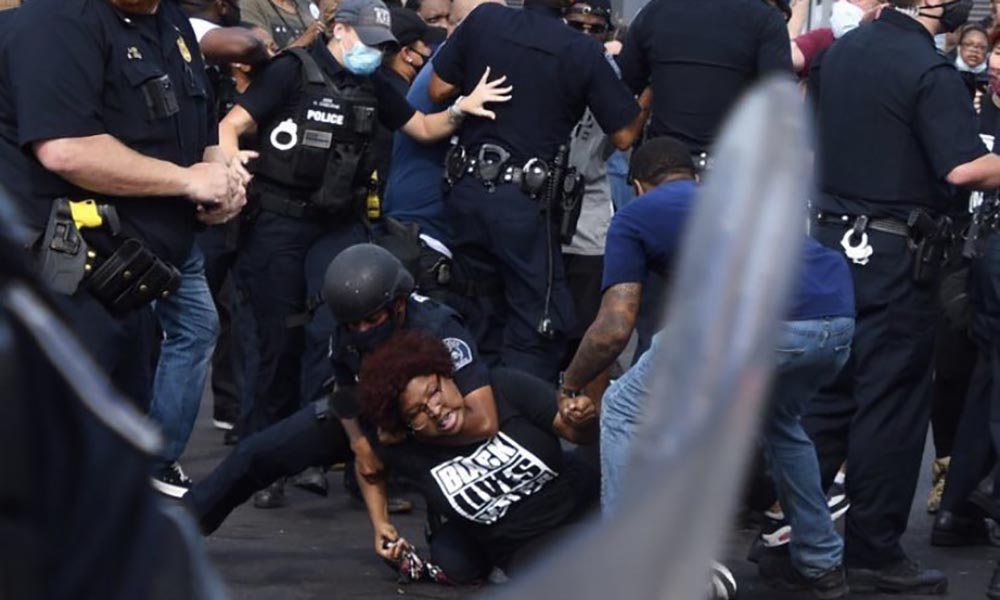 In a widely circulated tweet, Nakia Wallace, a co-founder and organizer of Detroit Will Breathe (DWB), called out the latest attempt of the Detroit Police Department’s (DPD) to whitewash their brutalization of protestors. They placed her in a chokehold.

Nakia was doing an interview about the City of Detroit filing a countersuit against protestors — a suit the ACLU said is an attempt to suppress free speech — and learned that the DPD claims that the image of her in a chokehold was not a chokehold, but a “two-hand restraint” used by a DPD officer who “slipped.” Nakia pointed not only out how ridiculous DPD’s claims are, but also that their attacks on protesters express exactly “how much they value Black life.”

To make matters worse, Mayor Duggan’s Corporation Counsel, the lawyer who represents the City of Detroit, is “requesting $200,000 dollars in taxpayer money … to further punish us for exercising our constitutional right to protest,” Nakia tweeted. DWB activists mobilized and gave public comment during the last session of City Council on November 23 to speak out against the countersuit against protestors, demanding that City Council reject the $200,000 request for the countersuit. So far, the Internal Operations Committee for Detroit City Council declined to vote on the contract as the result of opposition from activists and City Councilmember Raquel Castañeda-López.

Nakia’s tweet has been retweeted over 85,000 times, and has elicited condemnation of the police as well as the reaffirmation of the demand to Defund the Police. Even Democratic Party member Rashida Talib retweeted Nakia’s statement, saying, “[w]hile folks are worried about slogans, this government-funded abuse and violence goes unchecked.” One person tweeted, “Hey @BarackObama what ‘slogan’ do you think is needed to fix this?” Another person simply tweeted, “See… hell naw. Defund them bitches.” This is not only an expression of the movement’s massive support and defense of its principle demand, but a rebuke of the Democratic Party’s attempt to silence the militancy of the movement. Nakia herself tweeted that “we must fight for justice, we must take our freedom. It will not be given to us, we won’t negotiate it with the lesser of two evils, no saviors here.”

DWB, like other organizations that have led demonstrations against police brutality since this summer, has been constantly attacked by various police departments (including federal agencies), centrist Democratic Party politicians, and “community” misleaders who have ties with the police and the Democratic Party. DWB has ensured that efforts to defend the movement against attacks are utilized as opportunities to continue to mobilize and call out the hypocritical, racist, and oppressive practices of the police and the capitalist system as a whole. An important step for the movement will be the construction of a grassroots, politically independent, national organization that allows for more coordination and connection between the various local movements. If the movement is to succeed, it has to be just as coordinated between the different organizations and geographical locations as the police departments and politicians are.

Indeed, this lack of national organization is one of the greatest weaknesses of the BLM movement to date as it limits the movement’s ability to share experiences and have genuine, serious conversations about the most pressing issues facing the movement. Left Voice seeks to be that space for the revolutionary and radical Left, and asks for readers engaged in the BLM struggle to share their stories and experiences participating in the movement.

Ultimately, the experience of the BLM movement speaks to the need for an independent political party of and for the workers and the specially oppressed (marginalized communities like women, LGBTQ and non-binary folx, immigrants, BIPOC folx, etc). This political party does not have to merely revolve around elections, especially because it would be a political party that recognizes that change comes from the struggles in workplaces and in the streets.

An example of such a party is the PTS of Argentina. They fight in offices, in the streets, within unions, and throughout social movements as an alternative to corporate and career politicians, union bureaucrats that have to protect the interests of the management, and misleaders of social movements. Of course, any revolutionary party in the United States will have to reflect the particular conditions and burning social and political questions we face, but our connection to international organizations and the international struggle will be key for this task to be done dynamically and successfully.