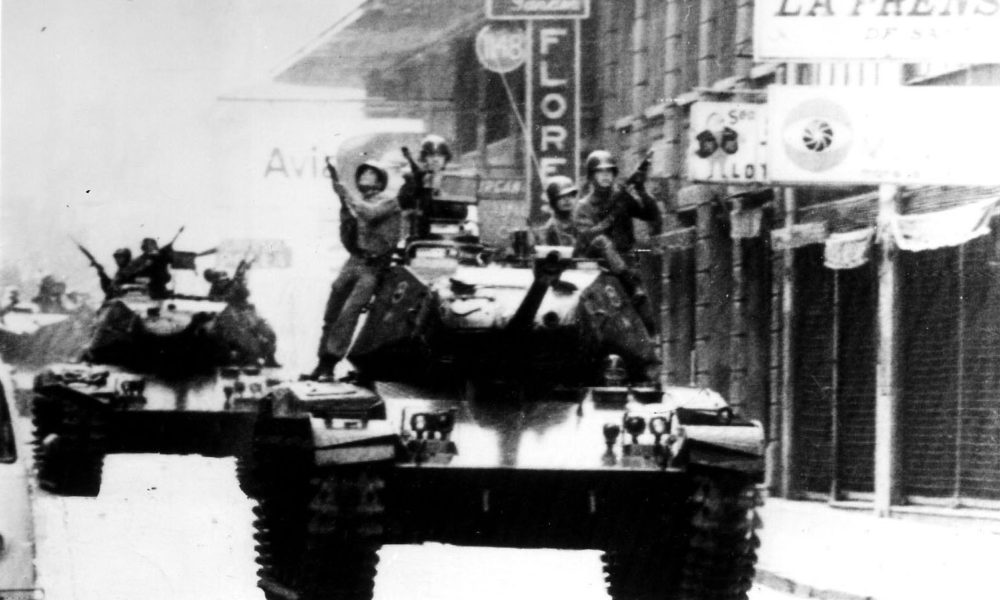 Tanks in the streets of downtown Santiago on September 11, 1973 – a scene from Patricio Guzmán's "The Battle of Chile" (Icarus Films).

Eric Blanc argues that Karl Kautsky’s pre-1910 views on revolution represent a “democratic road to socialism,” while Lenin’s views represent an “insurrectionary strategy.” In the conditions of a strong capitalist nation, Blanc argues, the socialist movement confronts the task of establishing legitimacy among the majority. Accordingly, a revolutionary movement is more likely to succeed by electing and defending a  workers’ government than it is by overthrowing the government through insurrection. The Russian Revolution of 1917 was an exceptional situation in which “dual power” existed for nine months before the provisional government was forcibly overthrown, a scenario that will not likely be replicated in the robust capitalist nations of today.

The title of Blanc’s first article in the debate with Taber is “Why Kautsky Was Right (and Why You Should Care).” It is one thing to say that pre-1910 Kautsky can offer insights for socialists today on how revolution will play out in larger capitalist countries. But it is quite another to say that Kautsky is a better representative of the “democratic road to socialism.” It is precisely because Lenin lived in a very undemocratic country that he is a great reference point for socialists today on the question of democracy and socialism. In conditions in which it would have been very easy to limit oneself to purely democratic reforms (and many did do just that), Lenin integrated the fight for democracy and socialism with revolution in conditions that were far from ideal.

As argued by others, including Charlie Post in a recent debate with Blanc,[1] Lenin’s fight for democracy included winning a majority within the soviets (workers’ councils) to the idea that they should become the government—an act that culminated in the insurrection of October-November 1917. Calling this process an “insurrectionary strategy” is a mischaracterization because it implies a lack of democracy. The insurrection was a technical act completely subordinate to the task of bringing one of the most democratic movements in world history to political power.

Did Lenin think the Russian experience would replicate itself in the same form everywhere? Blanc himself refers to an important discussion that took place at the Fourth Congress of the Communist International regarding the different types of left governments with varying levels of working-class support and how revolutionaries should relate to these forms in order to transcend them. One of the real limitations of the Comintern that Lenin observed was that Russian revolutionaries (himself included) were unable to communicate the Bolshevik experience to revolutionaries other countries in a way that accorded with the conditions they faced. It was the stability of capitalist institutions in stronger capitalist countries like Germany that, I think, Lenin is referring to in this observation and that made the conquest of power by the working class more difficult.

So, the debate is not really about whether revolutions will play out differently today than they did in Russia 1917. They certainly will, and Blanc is right that the applicability of the Russia Revolution to revolutionary movements today should not be overstated.

What Is the Real Question and Why Does This Matter for Today?

The real question that shapes the whole debate is, What is, and will be, more important for revolutionaries: social movements outside governmental bodies (“extra-parliamentary movements”) or the electoral formation of a workers’ government? Blanc says there is no way to quantify which is more important; they are both essential parts of a revolutionary process. And because they are essential parts, one cannot quantify their relative importance.

Revolutionary socialists, or Leninists, would agree with this, but they would also say that movements outside legislative bodies are more important than the electoral formations of worker representatives. Why? Because if the former are not developed, socialist transformation is impossible; people will never have the confidence to rule society if they are not doing it themselves. Furthermore, the workers’ government will be a sham without support among the democratic and socialist forces of society.

Blanc would probably agree and say that it is consistent with the argument he is making: It will be a combination of “extra-parliamentary” movements and a workers’ government that will interact with one another to expand and consolidate influence. The Finnish Revolution is the example in which both the workers’ government and extra-parliamentary movements were two parts of the political battle that socialists waged in the struggle against counterrevolution.

Even in the case of Finland, however, it was the extra-parliamentary movements that provided the strength of the elected workers’ government and the more important factor in its defense following its dissolution by the right.

If revolution will not unfold as it did in Russia, we can also say the same concerning Finland. At a certain stage of a struggle, and during revolutionary periods in particular, the workers’ government (after being elected to power) will undermine the democratic “dual power” organizations of the working class in society. These organizations will be important not only for defense but as a pivot to an offensive position to overthrow the forces of counter-revolution.

The Example of Chile

The example of Chile is instructive because it highlights the dangers of relying on a parliamentary strategy. It also points to the problem of not quantifying the relative importance of an electoral formation representing the working class and extra-parliamentary movements and viewing these two as building together in a progressive and non-antagonistic fashion.

On March 4, 1973, six months before the coup of September 11, the Popular Unity (UP) government of Salvador Allende increased its parliamentary representation to 43.4% of the vote. From 1970 to 1973, the forces of the political right had already tried to oust the Allende-led government through legislative and economic sabotage as well as a failed military coup on June 29, 1973.

During the six-month period before the coup, a variety of organizations developed that sought workers’ control of production as well as distribution of goods to the populace. Some of the most important “dual power” organizations of the working class were the “cordones industriales” (industrial chains), which developed in mid-October 1972 in response to a bosses’ strike and other forms of industrial and financial sabotage.

To address the increasingly polarized and revolutionary situation, on September 4, 1973, Allende addressed one of the largest political demonstrations in Chilean history. He announced that a plebiscite would be held on September 11 (the day he would be overthrown) to prove his mandate to Chilean society and the world.

Patricio Guzmán’s “The Battle of Chile,” a masterful three-part documentary of the Chilean revolution, captures the contradictory strategy of trying to garner more legitimacy through the bourgeois institutions and extending the power of grassroots organizations during this period. In one scene, a manager who supported workers’ control of industry explained that the time had come for workers to “take the offensive” because it was impossible for Popular Unity to gain 60% of the parliamentary vote.[2]

In another scene, a trade union official argued that the parallel organizations that the workers were organizing were provoking the mobilization of the right, that it was necessary support Allende’s plebiscite and wait for workers to consolidate more institutional power through the state. A worker responded that a plebiscite was redundant and would merely prove what they already know: that Allende had the backing of the majority of peasants and workers. He also criticized Allende’s lack of confidence in the popular organizations of the working class.[3] Other workers were arguing that the popular organizations had already surpassed the power of the state and that if Allende didn’t go on the offensive, the government would be “liquidated.”[4]

Allende undermined these organs of dual power by declaring a state of emergency and passing the Arms Control Law after the failed coup attempt on June 29. These measures allowed the military to enter factories to see if the workers were arming themselves.[5] In other words, the electoral coalition representing the working class helped the military gain valuable knowledge as to whether a coup would be successful.

The State: Bourgeois and Socialist Forms

Blanc argues that because democratic reforms like universal suffrage and parliamentary representation were won through working-class struggle, they are forms of representation within the capitalist state that are not inherently antagonistic to the goal of taking state power.

According to revolutionary socialists, bourgeois forms of government by their very nature come into conflict with working-class organizations of dual power and direct democracy. Marx and Engels themselves criticized the form the bourgeois state took through its separation of the executive and legislative branches—a scenario devised to reach a power-sharing agreement with the feudal-aristocratic order.

For Marx and Engels, the working class needs organs of government that are immediately recallable and accountable representatives who combine legislative and executive powers into one body, with executive functions being subordinate to the legislative.[6] This form of governance can take place only within the context of “dual power” organizations created by the working class itself.

The next installment will address how the current debate is reflected in the discussion on what do socialists should do today.

1. The debate, titled “Is There a Democratic Road to Socialism: A Debate,” took place at the “Socialism in Our Time” conference hosted by Historical Materialism in New York on April 14.

7. Regarding the extent to which capitalist forms of government are “democratic,” Draper’s observation is apt: “Whenever democratic forms become inconvenient for ruling class hegemony, there is a tendency for the ruling class to shift to more authoritarian and despotic forms. … The freedoms that the liberal bourgeoisie once demanded are cut back; popular institutions are doctored so as to interpose a maximum of impediments between the institutions and popular pressures from below. Democracy so-called becomes less a ‘massy’ institution … and more and more a complex of shifting screens to filter out popular elements and substitute devices of control from above; until, finally, if the term democracy is retained at all, popular elements are redefined out of it, and it is converted into a technical term for an authoritarianism purporting to serve the people whether they wished to be served up or not.” Ibid., 311.