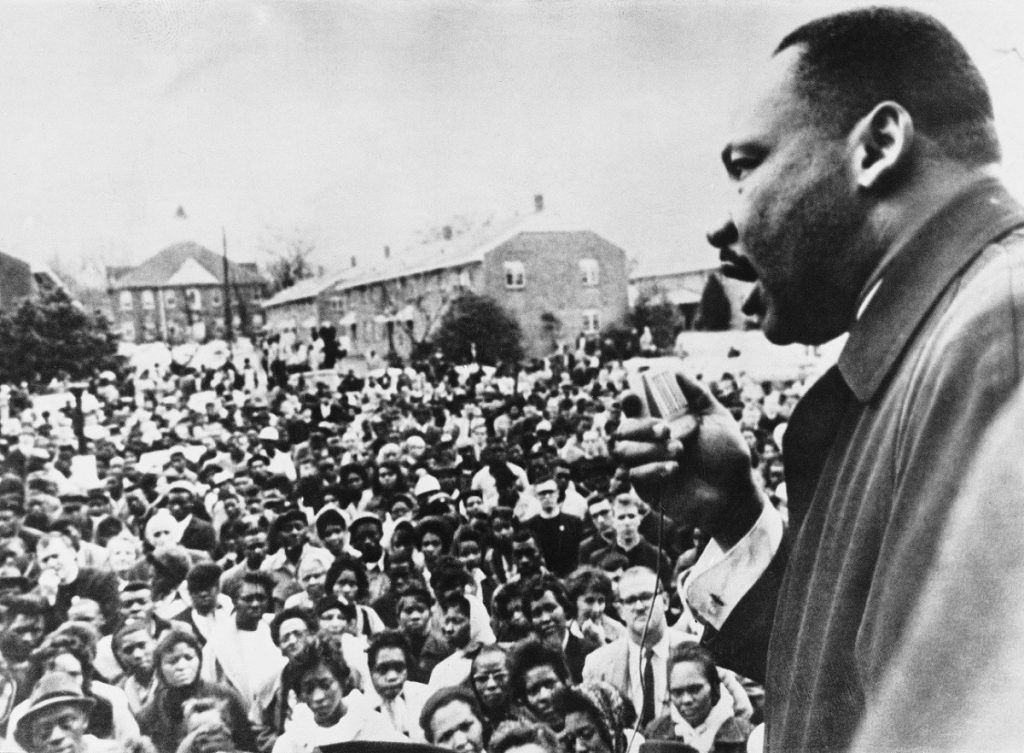 The assassination of Dr. Martin Luther King Jr. fifty years ago sparked mass uprisings which would form the basis of a new wave of Black revolutionary movements. What are the political lessons revolutionaries today can take from the rich legacy of the Civil Rights Movement and Black Revolutionary Movement?

As teachers rise up in Oklahoma, Kentucky, Arizona and West Virginia, the fight continues against the racist police murders in Sacramento, as do the civil disobedience protests in Memphis at the city’s immigration detention center.The political legacy of Martin Luther King Jr. lives on 50 years after his assassination.

50 years ago, on April 4, 1968, Dr. Martin Luther King Jr. was assassinated at a hotel in Memphis, Tennessee. The murder occurred days before he was scheduled to march with the sanitation workers of AFSCME Local 1733. Dr. King left a legacy of nonviolent resistance to the segregation in the South and later opposed the Vietnam War and U.S. imperialism.

Moments after King was assassinated at his hotel. People pointing at the direction of the shooter.
Joseph Louw—The LIFE Images Collection/Getty Images

King’s perspective on nonviolence was supported by a mass movement of youth, farmers and workers around the country. It led to the formal end of segregation and forced the federal government to intervene in the South, where white supremacist organizations were murdering anyone who defied their racist attacks.

While the Civil Rights Movement was based in liberal politics, its size and inclusion of workers struggle forced the Democratic Party — which until then had been indifferent to the decades of violent racist terror inflicted on Blacks, communists, and trade unionists — into defending integration, including in education so that Black children were allowed to attend schools that would have greater resources. However, the political ideology of pacifism could not solve economic segregation or the impoverished conditions in Black “ghettos.” By the time of King’s assassination, much of the Black youth had rejected pacifism as a tool of imperialism and were looking to radical and revolutionary politics.

In Detroit the day of King’s murder people rose up and the National Guard was called
Newark, 1967.Photograph: New York Times/Getty

By 1965, the unrest in Watts, California demonstrated a rejection of pacifism and a combative perspective against the police. In the last years of King’s life, he joined the movement against U.S. imperialist intervention in Vietnam. King stated, “I still believe change comes most meaningfully through non violence… I knew that I could never again raise my voice against the violence of the oppressed in the ghettos without having first spoken clearly to the greatest purveyor of violence in the world today – my own government.” King was pushed to the left while maintaining his pacifist ideology.

The assassination of King supposedly by bigot James Earl Ray was done when the FBI had been furiously monitoring and attempting to undermine King. Came at a time when people, particularly youth, were moving to the left of the Civil Rights Movement. There had already been rebellions in Watts (1965) and Detroit and Newark (1967) for example.

When King, who was seen as a peaceful and religious figure, was shot down in Memphis on April 4, an explosion of indignation swept the country. The uprisings came from rage against King’s murder, and their violent character was a rejection of pacifism. Waves of unrest were set off throughout dozens of major cities in the United States.

The National Guard was called in, and the U.S. military was forced to bring troops back from Vietnam in order to quell the rebellions. It was the beginning of the Black Power Movement. The Black Panthers, Black Liberation Army and SNCC (which changed its name from the Student Nonviolent Coordinating Committee to the Student National Coordinating Committee) bloomed in these struggles.

However, the move to combative struggle was not as connected to the union movement as Dr. King’s movement had been. At the time King was murdered, he was preparing to join a march in support of the striking sanitation workers in response to the fact that Black workers were paid less than white workers and worked in worse conditions. His strategy — to bring together union and religious leaders to fight for democratic demands under a mass movement — organized both Black and white people to fight racism.

The Civil Rights Movement included youth as well as elderly people. The Civil Rights Movement continued in the United Farm Workers’ struggle (also organized around a boycott) as well as in future labor, LGBT, and disabled movements of the 1970s. All of these, in addition to the recent immigrant rights struggle, have been directly influenced by King, and they all lay claim to his legacy. However, just as was the case with King, major parts of these movements became entrenched in the Democratic Party. The energy of their initial fight dissipated into electoralism. King’s legacy of nonviolence has been used to undermine the combative struggle against racism and has been used by the union bureaucracy to blunt workers’ struggles.

The Black Revolutionary movements rejected King’s religious “turn the other cheek” philosophy. They were instead influenced by Malcolm X and Marcus Garvey. From these roots came leaders like Kwame Ture, who left the Civil Rights Movement and coined the term “Black Power.” King’s perspective was to reform the US into a country of racial equality. Black revolutionaries had no illusions in reforming US capitalism. They fought not only for civil rights but for revolutionary socialism and against capitalism. Unlike King, however, they had no connection to the unions, which many dismissed as racist, with the exception of the Dodge Revolutionary Movement (DRUM) in Detroit.

Instead of a mass intergenerational movement, Black revolutionary groups like the Panthers and the new SNCC were almost exclusively Black, but not anti-white. Their membership was made up mostly of younger people, not the older generation that had fought against the Klan in the Civil Rights era. Furthermore, although the Black revolutionary movements understood the need for armed self-defense against the state, they did not have the members, resources or understanding of the massive repressive forces of the state, which was brought down upon them with racist savagery by the FBI in conjunction with local law enforcement. Without any economic power based in workplaces or an understanding of the viciousness of the state, Black revolutionary groups were decimated through spilled blood and prison bars.

As Lenin wrote in State and Revolution “During the lifetime of great revolutionaries, the oppressing classes constantly hounded them, them, received their theories with the most savage malice, the most furious hatred and the most unscrupulous campaigns of lies and slander. After their death, attempts are made to convert them into harmless icons, to canonize them, so to say, and to hallow their names to a certain extent for the ‘consolation’ of the oppressed classes and with the object of duping the latter, while at the same time robbing the revolutionary theory of its substance, blunting its revolutionary edge and vulgarizing it.”

Corporations like AT&T, Cingular Wireless, to the recent Super Bowl ad by Dodge have used Dr. King’s historical importance to peddle their products. Politicians who would have vehemently opposed Dr. Martin Luther King rush to claim his legacy. They trot out his corpse in an attempt to defend racism, xenophobia and bigotry. This is inherent in the use of comments like, “If King was alive today…” followed by reactionary trash from people attempting to pacify Black militancy against racism. But King’s entire political career challenged racism against Black people, and this was the reason for his assassination. King’s legacy was based in mass struggle; he fought for union rights and understood that a united, multi-racial fight against racism was needed. He challenged the Klan with solidarity and dedication. He also used the tactic of the boycott which drew international attention and national sympathy. The Black revolutionary movements that grew out of his assassination rejected King’s political weakness — i.e. pacifism and reformism— but were rooted in the need to organize against imperialism and racism.

Our challenge today is to learn from the experiences of the political movements before us. Both the legacy of King- entrenched in the labor movement, multiracial but intentionally organizing the oppressed against racism needs to be repeated. As the teachers strike across middle America that struggle should be linked with the struggle against racism and in particular police brutality. The militancy of the Black revolutionary movements and their stanch anti-capitalist and anti-imperialism makes no compromises with the reformism or pacifism.

King is one of the figures in recent history with the most influence on U.S. politics. His fight for the oppressed, support of the working class, and mass mobilizations are necessary for the struggles of today. Any revolutionary, mass, multiracial working-class movement against bigotry, capitalism and imperialism must draw from the strengths of both King’s and Black revolutionary traditions, and it must be based in communities and workplaces. It is our own legacy of resistance to take these struggles further than those who came before us; it is our duty to win.