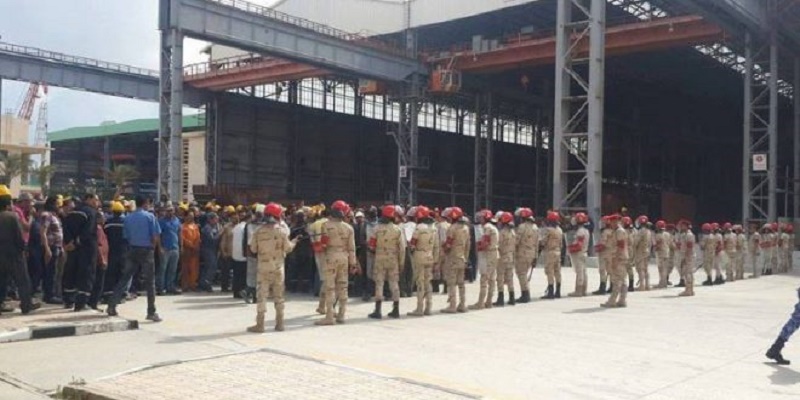 Image from Egyptian Cordination of Rights and Freedoms

The Alexandria Shipyard Company is located in Alexandria governorate, the second biggest Egyptian city and one of the centres of the January revolution. The governorate also has a long relationship with workers’ struggles from the beginning of the previous century until today. The company was founded in 1960 to serve the Egyptian navy. In 2003, in the context of a wave of privatisations across Egypt, the shipyard was transferred from the public sector to become the property of the Ministry of Defence. The Army attempted to finish off the trade union committee in the shipyard even though the committee was part of the state-run Egyptian Trade Union Federation and not a genuine trade union.

In 2015, General Abdelfattah al-Sisi, Egypt’s current president, announced works to develop the shipyard. His speech at the official celebrations demanded reduced costs, spurring workers into organising resistance against this attack on their earnings. In May 2016, under pressure from worsening living conditions, workers’ representatives and members of the union committee attempted to negotiate with the management, after the workers’ allowances for the month of Ramadan were cut.

The military director of the Shipyard refused to meet them, barking out an order to leave his office immediately. Angry workers began to gather on 23 May for a protest, raising demands such as raises to their monthly pay, back payment of profit-sharing bonuses which have been stopped for the last four years, improved health services and security. They also called for restarting production in areas which had been mothballed. The director’s swift answer was to send the Shipyard’s 2400-strong workforce home. While laid off they receive only one third of their normal pay. He referred 26 workers to the military prosecutors who sent their case to a military court on charges of “incitement to strike” and “refraining from work”.

A controversial clause in the 2014 constitution does allow workers employed in industries owned by the Ministry of Military Production to be tried before military judges, however the Alexandria Shipyard is owned by the Ministry of Defence. Moreover, the trial breaches the Egyptian Constitution as it concerns the right to strike, which is guaranteed in international conventions which Egypt has signed. Numerous rulings in Egyptian courts have upheld the right to strike since the national railworkers’ strike of 1986. In any case Egyptian workers have not waited for court rulings and millions have taken strike action in recent years.

Thirteen male and one female worker have appeared in court, while the rest of the 26 are on the run from the authorities. The fourteen who are detained have been kept in police cells since May, waiting for the judgement in their case, which has been postponed twice for no reason. As military courts do not allow appeals, the only way to overturn the sentences would be seek a presidential pardon. The judges could sentence the defendants to up to 3 years in prison.

Under pressure from the local and international solidarity campaign the Shipyard allowed 600 workers to return to work in August. Immediately, a fatal incident in one of the workshops showed how management’s neglect of health and safety procedures is putting workers’ lives at risk when 27-year old Mohammed Gad was killed by electrocution. He and his colleagues had spent long years demanding safety boots and occupational health and safety, but their complaints were ignored, and now his two young daughters are without a father.

The case against the 26 workers has to be understood in the context of a widespread attack on workers by the military regime as it pursues a plan of counter-revolution aimed at reversing the gains of the 2011 Revolution through attacks on opposition political groups, students and youth movements. Terrorising workers also serves the goal of imposing austerity policies.
Another dangerous aspect of case is the expanding role for the armed forces in the civilian economy. Every day, its activities are increasing in all sectors of industry and services, and this means the militarisation of labour relations and the spread of forced labour through recourse to military trials which lack the most basic guarantees of legal rights. As usual the ETUF has not opposed this as it is the labour arm of the regime inside the workers’ movement.

The persecution of the Shipyard workers has generated a wave of sympathy among workers in Egypt. A solidarity committee set up by revolutionary activists and human rights campaigners has been backed by independent unions, youth and trade union leaders. The Committee has also organised a number of solidarity meetings in Cairo and Alexandria, as well as social media actions and visits to the workers’ families. Prominent political figures and human rights campaigners have launched a series of videos on social media condemning the military trial.
There has also been solidarity from outside Egypt with hundreds of trade unionists and political activists from many countries signing a petition demanding the release of the workers. The level of police repression and the absence of mass workers’ organisations has prevented the organisation of mass events, however.

Solidarity with the workers and pressure for their release is not only in the interests of the labour movement, but will also help the struggle for the return of democracy and the battle against austerity. Unity and solidarity are our only weapons in confronting tyranny and exploitation.

Hisham Fouad is a socialist activist in Egypt.

What you can do
Sign up for our Thunderclap here: https://www.thunderclap.it/projects/46556-free-the-alex-shipyard-workers #FreetheAlexShipyardworkers
Share the letter from Egyptian trade unionists calling for global solidarity with the shipyard workers with trade union colleagues: https://egyptsolidarityinitiative.org/alexshipyardopenletter/” The letter and solidarity calls are also available in other languages: [한국어] [ελληνικά] [français] [Español] [português]
Send a message to President Sisi of Egypt calling on him to free the shipyard workers and end military trials for civilians. Write to: Office of the President Al Ittihadia Palace, Cairo, Arab Republic of Egypt, Fax: +202 2 391 1441, Email: [email protected], Twitter: @AlsisiOfficial
Organise a solidarity picture and share with us on Facebook (https://www.facebook.com/egypt.solidarity.initiative/) and Twitter (@Egy_Solidarity). Download posters for your action here: https://egyptsolidarityinitiative.files.wordpress.com/2016/06/alexshipyard_a4poster.pdf
Background resources and further information are online here: https://egyptsolidarityinitiative.org/alexshipyard