In a Washington Post Op-Ed, E.D. Mondainé claims that the protests for Black lives are no longer about the Black struggle but have become a “white spectacle.” He is wrong. And his admonishment to leave the streets, is even more wrong. The militant multi-ethnic struggle needs to continue in the streets and workplaces. 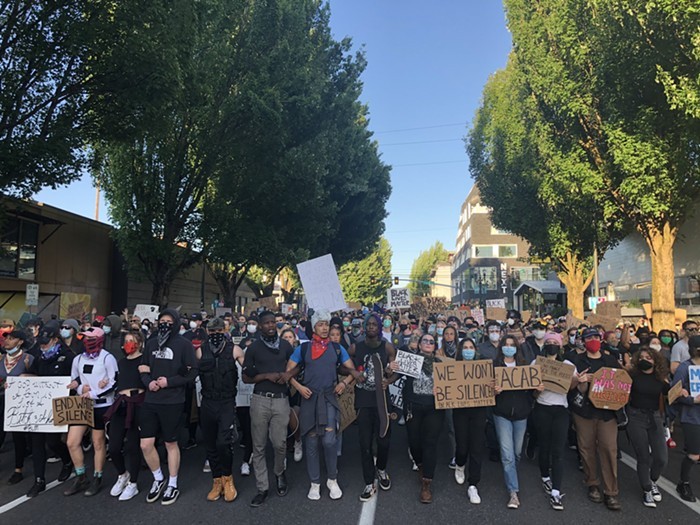 This wave of Black Lives Matter protests are the biggest in U.S. history; at their height, 10% of the US population may have taken the streets. These protests seemed to be waning — less people were in the streets, the encampment in NYC and Seattle were evicted. But in Portland, where hundreds of people were protesting, federal troops were deployed.

Those federal troops proceeded to fracture a protesters’ skull, kidnap people off the streets and use tear gas on protesters.

And then Portland exploded. Tens of thousands have taken the streets. There is a Wall of Moms, a Dad Pod and veterans who have come out in support of Portland protests. There are beautiful images: tens of thousands of people holding cell phones and chanting “Black Lives Matter.” Mothers holding signs saying “All moms were summoned when he called for his momma” — in reference to George Floyd calling out for his deceased mother as he was suffocated.

People are finding ways to defend themselves from the federal government’s violence. People have brought shields, helmets to protect them against rubber bullets. They brought leaf blowers to dissipate the tear gas. Hockey and lacrosse sticks to shoot canisters back at police and people put caulking in the fences to deflect pepper balls from federal troops.

And it’s true, the crowds are predominantly white. Portland is overwhelmingly white — Black people make up just 3% of the Portland population. However, Black people are prominent parts of the uprisings, Black Lives Matter Portland is leading contingents and there are Black people on the Wall of Moms.

“ Vandalizing government buildings and hurling projectiles at law enforcement draw attention — but how do these actions stop police from killing black people? What are antifa and other leftist agitators achieving for the cause of black equality? The “Wall of Moms,” while perhaps well-intentioned, ends up redirecting attention away from the urgent issue of murdered black bodies. This might ease the consciences of white, affluent women who have previously been silent in the face of black oppression, but it’s fair to ask: Are they really furthering the cause of justice, or is this another example of white co-optation?”

He argues that the focus has changed away from BLM and that this is to the detriment of the movement. He goes on to argue that this spectacle is precisely what Trump wants to distract in these “empty battles” where “they have the advantage.”

“This is a moment for serious action — to once again take up the mantle of the civil rights era by summoning the same conviction and determination our forebears did.” And what is that serious action that Mondainé suggests ?

Get out of the streets, wait and vote.

“I am proposing that we take the cause of Black Lives Matter into those places where tear gas and rubber bullets and federal agents cannot find us, and where there is less risk of spectacle distracting from our true aims. In boardrooms, in schools, in city councils, in the halls of justice, in the smoky backrooms of a duplicitous government — that is where we will finally dismantle the gears of the brutal, racist machine that has been terrorizing black Americans and hollowing out the moral character of this nation since its inception.”

And secondly, federal troops kidnapping Black Lives Matter protesters requires a response to that issue. By defining Black issues in such a ridiculously narrow way, Mondaine is against protesting the violence of federal troops against Black people. Mondainé is calling for people to leave the streets full of  “tear gas and rubber bullets” — that is to stop fighting the federal troops who occupy the city in favor of less threatening civic engagement. Basically back to business as usual. Business as usual did not build the movement. It will certainly not end systemic racism.

The truth is that the great plan put forward by Portland NAACP President is to get white people, Black people — everyone out of the streets and to have folks go home and wait presumably  until November to vote for “shoot Black people in the leg” Biden. The NAACP is against confrontations with police and the federal troops. Instead, we are supposed to hope for politicians to make the right back room deal. To compromise and negotiate. To donate money to our oppressors and for the masses in the streets, go home and wait.

And he’s using the worst kind of identity politics to make that argument. He’s demanding that white people in Portland “follow Black leadership”— but not the Black leadership in the streets across the country, not the Black leadership of Black socialists like Fred Hampton who’s assassination was orchestrated by the federal government, but of Black Democrats like himself who want no fightback. He’s calling for silence and obedience. And he’s using red-baiting tactics to do it; painting white people as “outside agitators,” as outside antifa anarchists, thus echoing the rhetoric of Donald Trump justifying the repression. Claiming the Left tactics are people with ulterior motives were themselves tactics used against historic figures like Malcolm X who Mondainé himself references.

In fact, the only reason we are talking about racism and police brutality is because of the militant actions of people first in Minneapolis and then around the US and world. The reason we’re talking about George Floyd and Breonna Taylor is because we didn’t wait till November. We didn’t wait till the board meeting. We took the streets. The protests threaten that. Biden has rejected the Movement for Black Lives platform. He calls for MORE money for police. This movement in the streets is not only defiant of police and this racist government. It is defiant of the Democrats and Republicans.

Anyone wanting to stop the street battles and protests for whatever reasons or who’s actions lead to those actions being stopped is suspect. They aren’t about the movement.   Such is the case with the NAACP, whose entire political perspective is to get our oppressors in the Democratic Party elected, donating money to the party and playing a role in influencing their candidates and agenda.

But these protests are different. We’re making connections. We’re talking about Black trans lives, and about Black women’s lives.  We’re going to fight against evictions. We want to abolish the police and prisons, as well as ICE and Customs and Border Protection, one of the repressive forces in Portland. The fight against the feds in Portland is one and the same with the fight against police violence and the fight against ICE detention centers, layoffs and evictions. We saw how the governments claim there is no money for education or healthcare, but drop billions on police budgets. And these are Black issues because in workplaces, in the streets, in healthcare and schools Black people are the most oppressed and exploited. Systemic racism means that it shows up in every aspect of the rotten capitalist system in which we live.

So we don’t want a “seat at the table” with our oppressors. We want to flip the table over! We don’t want your system!

And the only thing that can fight against police violence, the violence of federal troops, of Democrats and Republicans is a radical, multi-ethnic struggle in the streets and in our workplaces. We don’t need “allies” who blindly follow reformist Black leaders. We want working class comrades to struggle against every aspect of this racist capitalist system, especially the issues affecting the Black working class, amongst the most exploited and oppressed sector in the US. We need comrades fighting for revolution and organizing politically to make it so.