Fires in Greece and Turkey: Consequences of the Climate Crisis and Austerity Policies

In a summer marked by a succession of extreme weather events, Greece and Turkey have been experiencing heat waves and terrible fires in recent days, symptomatic of global warming but also resulting from catastrophic government management. 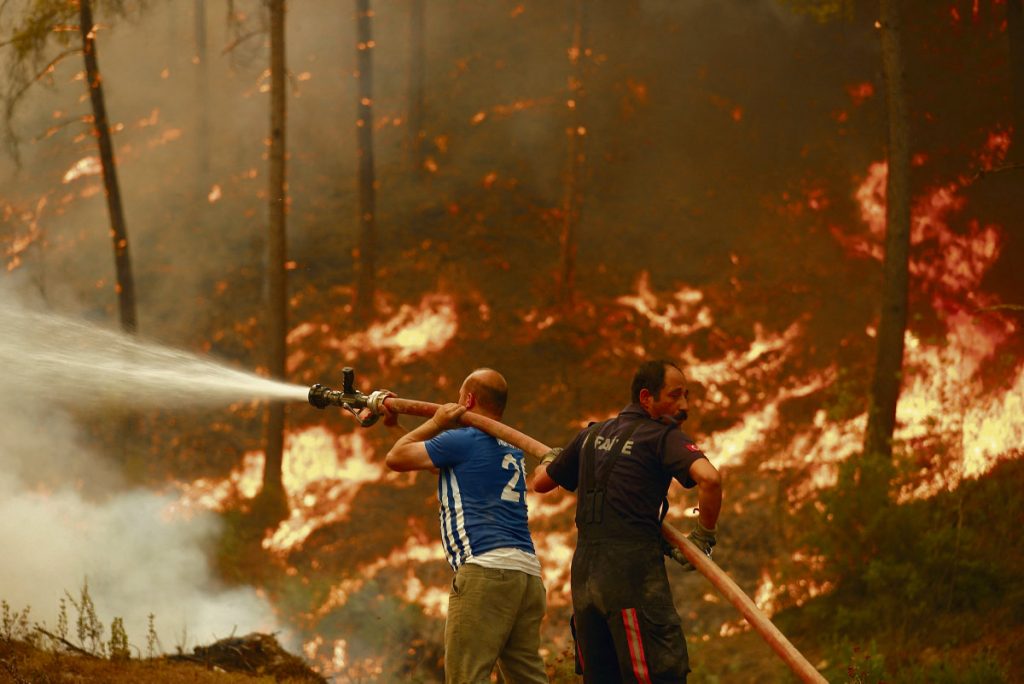 For a week now, Turkey has been facing multiple fires, considered the worst in its history, with more than 100,000 hectares of crops and pine forests already burned. This major ecological disaster includes an already heavy human toll: eight deaths at this writing, hundreds of injured, and damage to houses, cars, and cattle that have been torched by the flames. Many evacuations by boat have been necessary, and the fire threatens a thermal power station in Milas.

In Greece as well, the number of fires has increased over the last 48 hours, with more than 80 fires reported on Tuesday, August 3. A forest fire broke out in Varympompi, a suburb of Athens at the foot of Mount Parnes. It has been ravaged by flames, as evidenced by images of the city’s main square — a few dozen kilometers from the capital — completely burned, as is the nearby forest, one of the “lungs” of the Greek capital. The smoke cloud extends over the Athens region, and residents have been advised to stay at home with their doors and windows closed.

The islands of Evia (off Attica) and Rhodes (Dodecanese) have also been hit by very violent forest fires that threaten homes, as has the southern Peloponnese.

Extreme Episodes are the Consequence of Global Warming and Government Management

Greece, Turkey, and southern Europe are experiencing repeated heat waves this summer, with temperatures even exceeding 113 degrees Fahrenheit. These heat waves are a direct consequence of the climate crisis, and will continue, just as the Intergovernmental Panel on Climate Change warned in a recent report. The summer of 2021 has been marked by a succession of these extreme weather events, from floods in Germany and Belgium, to heat waves in the Mediterranean, and the polar cold that hit Brazil.

The increase in extreme climate events — something authorities failed to anticipate — are worsening the forest fires. Worse still, the austerity policies implemented in Greece since the 2008 crisis have drastically reduced the budget for forest fire prevention. As the newspaper Prin, published by the NAR (a member party of the far-left coalition Antarsya), points out, “The state’s inability to prevent and extinguish fires is chronic. It sticks to a policy of ‘individual responsibility’ and sending messages via 112 [an emergency warning app] to avoid a new Mati,” a fire in 2018 that was the deadliest in recent years in Greece.”

Another major factor in the inability to fight fires is obsolete equipment: “More than 15 Canadair firefighting aircraft (9 CL-215s and 6 CL-415s) are unable to fly or drop water more than once because of equipment failures,” the article notes. Obsolete equipment is accompanied by the dismantling and weakening of the fire department.

“The uncontrolled fires are another expression of the gap that is widening within Greek society,” Stephen J. Pyne, a historian specializing in forest fires, told Reporterre. Similarly, the electricity network is experiencing heavy overloads due to the intensive use of fans and air conditioners during the heat wave, which has led to power outages in Rhodes and damage to old electrical cables in Attica, as also reported by Reporterre.

The same is true in Turkey, where the opposition is denouncing the dismantling of fire protection and firefighting units, such as water bombers that have failed and are stuck on the ground, for which maintenance would require 4 million pounds that the government refuses to invest.

The main opposition party, the CHP (Republican People’s Party, social democrat), for example, denounces the dismantling of a semi-public organization with water bombers. The head of state is saying nothing, instead blaming the Turkish Aeronautical Association for the unavailability of the aircraft, while the association’s administrator has revealed a lack of public funds needed to maintain the planes — estimated at 4 million pounds (400,000 euros) to enable them to fly again. It is an unbelievable level of negligence in view of the scale of the disaster.

Global warming’s growing number of fires and heat waves shows the disastrous consequences of the exploitation of nature and humans by the capitalist system. These consequences are further aggravated by the destruction of public services for the prevention of and fight against forest fires by successive bourgeois governments.

Governments also bear responsibility because we know that a great number of these fires are started deliberately for the purpose of real estate speculation. In Greece in particular, the law protecting burnt woods and forests has been relaxed, whetting the appetite of real estate developers. This has led each summer to deliberate arson, especially on the outskirts of Athens — fires fueled by drought and winds that can quickly make them uncontrollable.

First published on August 4 in French in Révolution Permanente.