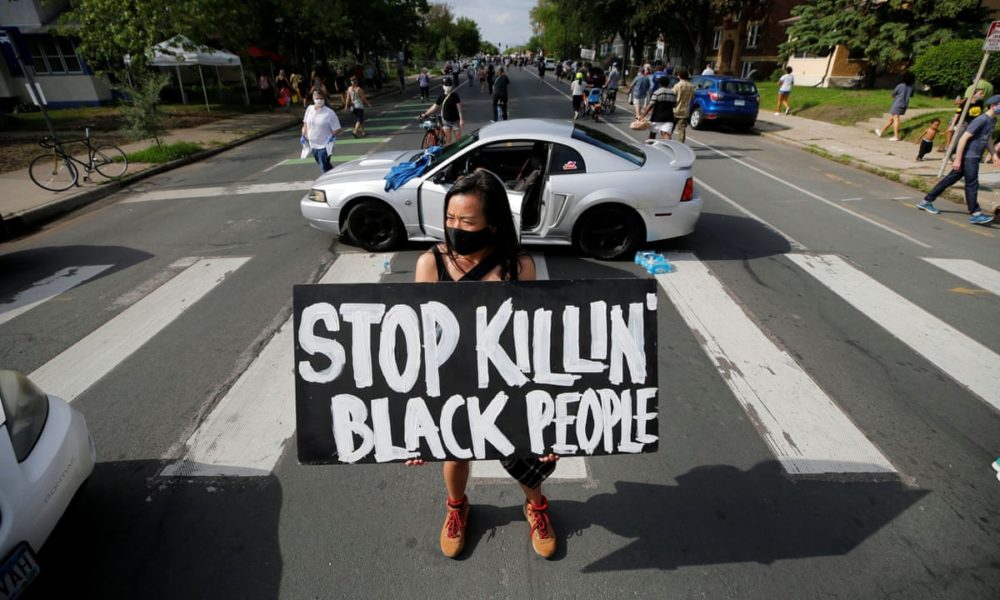 Four police officers from the Minneapolis Police Department murdered George Floyd on Monday, as a crowd of bystanders shouted at them to stop. In disturbing video evidence that went viral on Tuesday, officers are seen choking Floyd to death for 10 minutes, all while joking and jeering to one another and to the assembled crowd. The public outrage was immediate and explosive. The Minneapolis PD responded by firing all four officers on Tuesday afternoon. This action wasn’t enough, however, to stop thousands from taking the streets to fight back against the state-sanctioned violence against Black people.

The quick firing of the murderous officers was a defensive move from the police department. It was an attempt to appease the furious masses — one that ultimately failed as people took the streets to demand justice for George Floyd. This firing of killer cops is not even close to sufficient. We echo the call by Floyd’s sister: jail the killer cops.

The fact that the worst to happen to these officers in Minneapolis who murdered a man on video, with a crowd as witnesses, pleading them to stop,  is a job loss is a clear example of the depravity of the current system.

From George Floyd to Breonna Taylor to Sean Reed to Ahmaund Arbery to Michael Brown to Trayvon Martin — we have seen time and time again that people of color, especially Black men, are subjected to routine acts of horrific violence while the perpetrators are never held accountable.

There are too many examples of murderous cops and vigilantes getting away with murder. George Zimmerman chased down Trayvon Martin, murdered him, escaped conviction, and then auctioned off the gun that he used to kill Martin. Darren Wilson, the man who murdered Michael Brown in Ferguson, served no jail-time and received an incredibly sympathetic profile in the New Yorker. There are the police officers who killed Tamir Rice, a child, and were never brought up on charges. There is the officer who killed Philindo Castille on video and was still found not guilty. There are the officers who killed Breonna Taylor as she slept in her bed and then arrested her partner, Kenneth Walker, for defending himself. Time and time again we have seen that the so-called criminal justice system offers no justice for the victims of racist violence.

It is obscene to think  that millions of people have served, or are currently serving, prison sentences for drug-related offenses while these killer cops walk free. There are still Black and Brown people in prison for drug charges in states where those drugs have now been legalized. Black people are arrested and imprisoned for ‘resisting arrest’ and ‘disturbing the peace’ while police officers can murder a man on video and only get fired. The U.S. prison and criminal justice system has systematically imprisoned Black and Brown people for decades while letting white vigilantes and murderous police officers go free.  The system is a farce that is used to continue the oppression of people of color nationwide.

In the rare cases where some action is taken, as in the case of Minneapolis, it almost always takes the form of firing the specific officers involved or, like is happening in Louisville, an internal investigation of what occurred. Both of these tactics are intended to distract the angry masses and make them lose interest in the case. The Minneapolis PD is hoping that, by firing the four officers who killed Floyd, they will make us all forget about what happened.  Some, like Democratic congresswoman Illhan Omar, who are calling for an investigation into the incident by the Department of Justice. But the Department of Justice has proved on countless occasions that they are another arm of the injustice system that terrorizes people of color nationwide. We can’t trust the criminal justice system to investigate itself.

If these killer cops are to truly be locked up for their crimes, we will need mass mobilizations both in Minneapolis and nationwide to demand their arrest. This is a minimal demand, but it is also unprecedented for cops to be put in jail for murder.

The real solutions to police violence are not as simple as ‘rooting out the bad apples’ or locking up a few cops. The problems are systematic and are tied to the inherently racist system of capitalism. In this sense, to abolish police violence will need to abolish the police, as well as this racist capitalist system.

The thousands who risked police repression and Covid-19 infection to rally on the streets of Minneapolis on Tuesday night should be examples for all of us. We must stand together and mobilize to demand justice for Floyd and all other victims of racist violence.