“F**k Your Curfew!”: Protests Grow Despite Curfews Ordered Across the Country

Mayors in cities across the United States are implementing curfew in the latest maneuver to stop anti-police protests exploding in every state. This is nothing but a move to authorize the repression of protesters and the unbridled violence of the state. 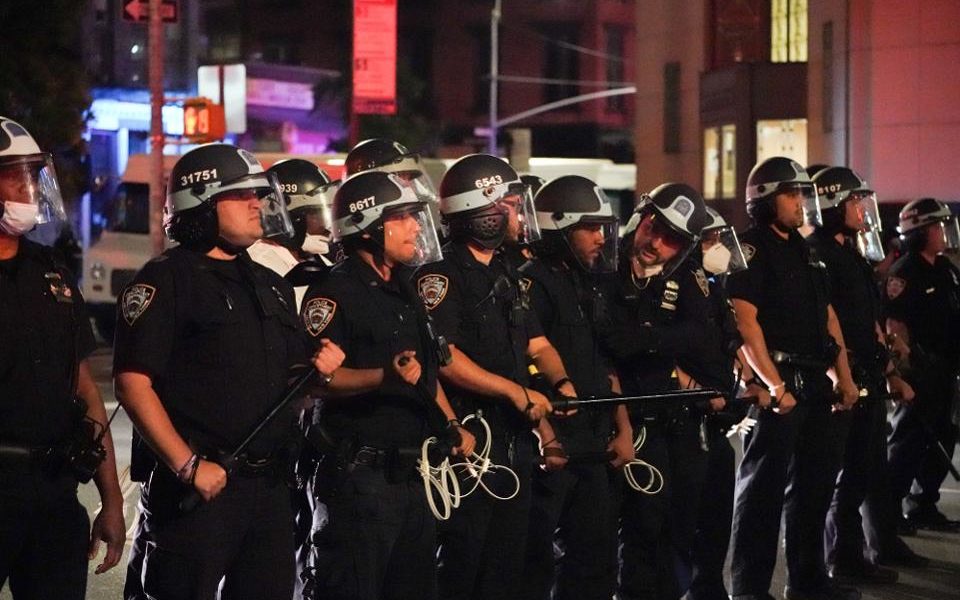 On Monday, New York City became the latest city to declare a curfew in response to the growing uprising in protest of the police’s murder of George Floyd. After several days of intense clashes between protesters and police, Mayor Bill de Blasio established a city-wide curfew to deter “looters.” Protesters responded by turning out in numbers greater than ever before and breaking the undemocratic curfew en masse. The state has responded to these protests against police brutality with more violence — we must respond with increased forces in the streets to defy this repressive measure.

The NYC curfew was originally set at 11pm but, following another night of resistance on Monday, the curfew was shifted back to 8pm on Tuesday, and extended for the rest of the week. In addition, the city suspended car services and limited protesters’ access to the trains letting them know less than an hour before the curfew went into effect. This left thousands stranded with no way of getting home. When they tried to leave the protests, many protesters were stranded hundreds of blocks from their homes, without access to the subway, rideshare services, or even buses — this left them to run from the cops for blocks as they tried to seek shelter.

This curfew, like others like it across the country, is a vile attempt to repress protesters and stop the mobilizations without having to concede to any of the protesters’ demands. Make no mistake: it has nothing to do with the public good and everything to do with protecting the capitalist state and all of the violence, racism, and oppression that goes along with it. It is an attempt to divide the protests and support for the protests between law-abiding “peaceful” protesters and “violent” protesters who stay on the street. They would rather wage war against protesters by militarizing the streets than arrest the three other officers who killed George Floyd on camera. They would rather arrest thousands of marchers than arrest a single one of the cops who have blatantly beat protesters with their badge numbers covered. They will arrest protesters whose only crime is standing outside at 8:15pm while letting three murderers walk free.

For their part, the police are using the curfews as an excuse to ramp up violent repression against the mobilizations. On Monday, police reported that 700 protesters were arrested in NYC. Even before curfew began, police could be seen blocking subway entrances to prevent protesters from getting home, forcing them to break curfew and risk arrest. The cops ordered protesters to disperse to avoid arrest before isolating them and arrested them anyway. On Tuesday night, police trapped thousands of protesters on the Manhattan bridge for over an hour and made mass arrests throughout the city. The curfew has been instituted in the name of law and order, but all it does is give the police free reign to repress the protests with impunity.

And though the curfew is designed to target protesters and break up the mobilizations, it will also be used to arrest and harass workers, especially people of color, who are out on the streets past 8pm. Not to mention the risk it poses for the hundreds of thousands of homeless people on the streets who have nowhere to go in order to comply with this order. This is a reprehensible authoritarian move that endangers the lives of the working class and moves to squash the movement protesting police brutality.

But let’s not forget who ordered these curfews. They were not placed by the police, though they did support them. They were not ordered by Trump, though he has used his bully pulpit to encourage them. Rather, they were placed, in many cities, by the Demcoratic mayors and governors who oversee the repression of protesters. The NYC curfew was ordered by Democratic golden-boy Andrew Cuomo and executed by former Democratic presidential candidate (and Bernie Sanders’ champion) Bill de Blasio. This flies in the face of their rhetoric of understanding and supporting the protesters and reveals that, for all of their speeches, they are just as willing to repress, just as willing to arrest, just as willing to restrict, and just as willing to kill as any other bourgeois politicians. In the midst of this crisis, the Democrats and the Republicans are united against the protests. For all of their bombast about caring about Black lives and “listening” to protesters, de Blasio and Cuomo are the ones sending the police to destroy the movement and silence protesters. They are doing this through a strategy of dividing the protests between the “peaceful protesters” and “outside agitators” who are doing the looting and property damage. They are doing this so that they can talk out of both sides of their mouth and put down the protests.

But despite the curfews, protesters turned out in large numbers to defy these orders, risking repression and arrest. In New York City, Tuesday’s protests were the largest yet despite the early curfew. Over 10,000 people marched in protests across Manhattan and Brooklyn. At least 5,000 people marched from the famous Stonewall Inn to the Manhattan Bridge, shouting “Fuck Your Curfew!” as they marched towards lines of cops waiting to arrest them as the clock ticked closer to 8pm.

We must combat the institution of curfew by breaking them together in the thousands. Protesters must continue to hold the streets, even as the curfew goes into effect. In addition, we must demand that all those arrested for breaking curfew be immediately released and all charges against them dropped.

The people in the streets have learned quickly that the curfews exist only to justify increased repression against protesters. But even met with the promise of arrest and tear gas, even when the cops block subway entrances before curfew to strand protesters, the protesters remain undaunted. The state’s tactic of responding to the protests with more repression is not deterring these people but rather is energizing them, teaching them that the state does not protect them. The police and elected officials of these cities will probably increase repression in the coming days. They may move up the curfew again or increase arrests or begin using harsher methods of repression. But, if the past few days have been any indication, these attempts will not work. Each day has been bigger than the last and tomorrow will be bigger. Tomorrow will be bigger. We must support the protesters’ resolve and their refusal to be silenced in the fight against the white supremacist police state.