Rally in NYC: Free, Safe, Legal Abortions on Demand and Without Apology

If you’re in or around New York City, join us this Sunday, September 12, for a protest in defense of abortion rights and to demand free, safe, and accessible abortions. 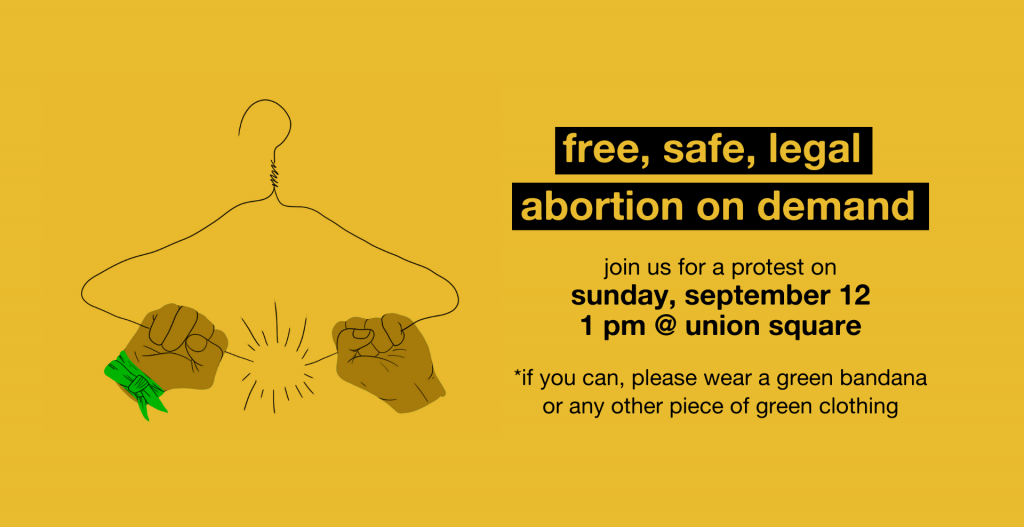 RSVP to the event on Facebook, or sign up to help organize the rally or co-sponsor here.

The right to an abortion is now all but meaningless in Texas — but this only the beginning. Abortion rights are being challenged across the country. Having eroded the protections of Roe v. Wade last week, the nine unelected justices of the Supreme Court are poised to entirely do away with the national right to an abortion when they hear an abortion case this year.

Let’s be clear: laws against abortion disproportionately affect working class people, people of color, undocumented immigrants and other oppressed people. This is who will be unable to access abortions.

We need a movement for free, safe, and legal abortion, on demand and without apology. We support and fight for the reproductive autonomy of all people.

The so called “pro-life” sectors drip with hypocrisy. In “pro-life” Texas, children freeze to death in winter storms and Gregg Abbott tries to starve people back to work by cutting unemployment benefits during a pandemic. The state claims they don’t have enough money to fix their failing power grids, but can offer a $10,000 bounty for every person who abets an abortion. The Right has no interest in protecting life.

The Democratic Party, which now holds two of three branches of government, has done nothing in over four decades to meaningfully protect abortion access. Instead, they cynically use abortion rights as a way to get reluctant voters to the polls, constantly pleading with them to stave of an emergency that elected Democrats have no interest in actually solving.

We can’t trust the Supreme Court or the Democrats to defend our right to an abortion. In the tradition of the women’s strikes in Poland, or the abortion rights movements in Ireland, Argentina, and the rest of Latin America, we need to build a mass movement here at home. Only such a movement can defend the right to an abortion.

If you’re in New York City (or can travel for the day), join us on Sunday, September 12, to demand free, safe, and accessible abortions. The only way to win is if we build a movement together and the time to start is now.

If you are a group that is interested in co-sponsoring the march, or an individual looking to volunteer, sign up here.

We encourage folks to wear a green bandana or other piece of green clothing in the spirit of the abortion rights movement across Latin America.