For Wall and War: What’s Revealed by Trump’s SOTU?

In the midst of a crisis of both parties, what did Trump SOTU propose and what does it mean for working class and oppressed people? 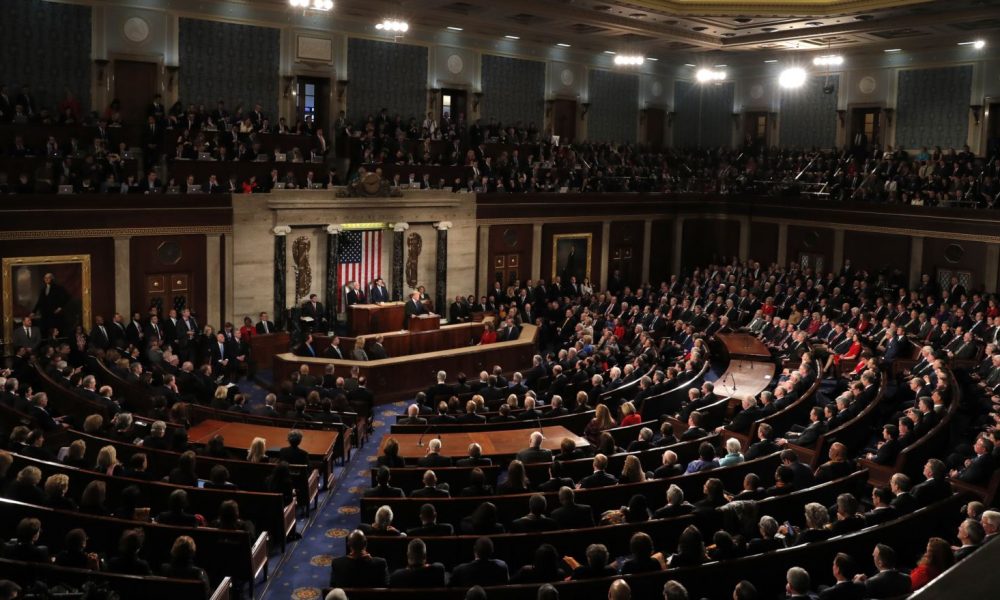 Like most State of the Union addresses, much of Trump’s speech on Tuesday night was focused on empty platitudes (we share the same flag, veterans are heroes) designed to get Congress members from both parties on their feet and create a fanciful image of national unity. And as usual, there was the spectacle in which victims of official US enemies — gangs or North Korea — were trotted out to elicit maximum sympathy for the president’s agenda. However, Trump is still far from being able to unite even his own party, let alone the establishment as a whole, despite his attempts in Tuesday’s speech.

Polls currently put Trump at between 35 and 45 percent support among the public (the higher figure seems too generous), meaning that the president delivered his first SOTU with a record low-approval rating. It is not hard to imagine why. None of the populist proposals that catapulted him past the other Republican contenders in the primaries have materialized, a fact that is eroding a good deal of his working-class support.

Contrary to Trump’s claims, there is little evidence that any of the good-paying jobs that were promised a year ago have been “brought back.” The labor force participation rate of around 63 percent is about equal to what it was during Obama’s second term and significantly lower than it was before the recession. Trump has not withdrawn the U.S. from NAFTA although he may try to tinker around the edges of it to gain some advantages for American businesses. Wages have been more or less flat despite the stock market records.

Perhaps in an attempt to make up for the damage done among working class voters by the tax bill, Trump returned to some of the populist proposals that he had abandoned after the campaign, and even added a few new ones. Trump issued fresh calls for paid family leave, building new roads and modern infrastructure, creating “reciprocal” trade agreements, lowering the cost of prescription drugs, reforming the prison system, and giving former inmates “a second chance.” But given that the same divisions exist now as did during the Obamacare Repeal-and-Replace attempts a few months ago, it is unlikely that any of these proposals ever see the light of day.

On the whole, conciliation with the establishment seemed to be a leitmotif. Trump’s “drain the swamp” rhetoric was conspicuously missing from the speech. He did not mention “radical Islamic terror” once, a phrase he seemed contractually obliged to use in every speech a few months ago. He even resisted taking his characteristic swipes at the Democrats, recognizing that some measure of cooperation with his rivals from both parties will be necessary to advance his agenda.

So far however, this cooperation has generally eluded him. The Obamacare Repeal-and-Replace project was undone by both “moderates” and “extremist” figures in the GOP and the nagging Russia-gate scandal has so far kept the traditional figures of the party at arm’s length. The tax reform has bought him some time with the capitalist class, since the rich, almost without exception, will profit immensely. However, the bill has relatively little popular support and is unlikely to offer any meaningful benefit to most working people. In other words, Trump will still face the same problem as much of the GOP — a lack of a solid base.

The former Marine Corps general John Kelly has put some order in the White House since becoming Chief of Staff this past summer. But we cannot forget that in Trump’s first year, a Communications Director, a Press Secretary, a National Security Advisor, a Chief Strategist, Two Chiefs of Staff, and the Secretary of Health and Human Services have been fired or resigned. General Kelly was likely the only one standing in the way of Trump axing top Cabinet members Rex Tillerson and Jeff Sessions along with them.

But the crisis affecting the Trump Administration or the two parties as a whole should not make us complacent. Most of the proposals raised by the president last night were nothing less than terrifying. Should he be able to implement any of his reactionary projects, even partially, working-class and poor people will suffer tremendously.

Trump’s discourse was mainly focused on Wall and Wars, potentially signalling a new imperialist offensive, in contrast to the soft imperialism of Obama. One right-populist proposal he not ratcheted a bit is his campaign against “illegal immigrants”. During at least two points in the speech, Trump attempted to link to the violence of street gangs to the country’s immigration “loopholes” and the arrival of refugee children from Central America. “Many of these gang members,” he claimed “took advantage of glaring loopholes and our laws to enter the country as illegal, unaccompanied, alien minors.”

Under the direction of the 45th president, over 225,000 immigrants have been deported and more than 140,000 have been detained. ICE has unveiled new plans to expand the number of immigrant detention centers and last week, it was revealed that the agency will be granted access to a nationwide database of license plates photographs. The number of deportations is still far from the record of 400,000 “achieved” by Obama in 2012. But new powers to ICE will allow the agency to escalate efforts to round up and deport ever more immigrants.

Trump officially unveiled his plan to grant legal status to Dreamers but with so many poison pills included, that the plan is unlikely to ever pass through Congress. These included fully funding a border wall, hiring thousands of new border patrol agents, ending the diversity visa program, ending all family sponsorships other than minor children and spouses, and most likely, deporting all immigrant children who arrived as part of the waves of refugees from Central America in recent years. Democrats like Chuck Schumer briefly considered supporting a plan like this but the repercussions among their base have since caused them to back away from it.

Perhaps most alarming of all is Trump’s call “modernize and rebuild our nuclear arsenal,” already the world’s second largest (lagging just slightly behind Russia.) Currently, the U.S. has 6,800 nuclear warheads, with 1,800 of them deployed. This comes less than a month after taunting North Korea’s leader on Twitter that the “Nuclear Button is on [his] desk at all times,” and “is a much bigger & more powerful” than that of Kim Jong Un’s. The recent sabre-rattling by Trump put the Doomsday Clock, maintained by the Bulletin of Atomic Scientists at two minutes to midnight, the closest it has been since the height of the cold war.

This proposal goes hand-in-hand with Trump’s demand to expand the military — “fully fund” the armed forces, in his words — and maintain a permanent military presence in the Middle East. Already the longest war in U.S. history, Trump proclaims he has no intention of withdrawing from Afghanistan in the near future. “Our military is no longer undermined by artificial timelines.” Unable to unite the various GOP factions behind a common program, much less the establishment as a whole, Trump is increasingly leaning on the military, in bonapartist fashion.

Less than two weeks before his speech, the Department of Defense unveiled a new National Defense Strategy. Two things are most noteworthy from the strategy. The first is a call to fight the budget cuts to the military imposed by the sequester. Mattis declares that “ no enemy in the field has done more to harm the readiness of the U.S. military than the combined impact of the Budget Control Act’s defense spending cuts.” The second is an admission that world powers, not terrorist groups, constitute the greatest threat to U.S. hegemony. “Though we will continue to prosecute the campaign against terrorists that we are engaged in today, but great power competition, not terrorism, is now the primary focus of U.S. national security.”

Trump touted his achievement of ending “more regulations in our first year than any administration in the history of our country.” What Trump refers to here is, of course, restarting construction of the Dakota Access and Keystone XL pipelines, which will add additional tens of millions of metric tons of CO2 to the atmosphere each year. At at moment in which nearly every week brings new and tragic findings about the state of our environment, the president claims “We have ended the war on American energy. And we have ended the war on beautiful, clean coal [sic].”

As for the Democrats, the most they could counter with was a forgotten member of the Kennedy family. Having failed at achieving a new family dynasty this decade, they are apparently now trying to resurrect an old one. The party’s brand names like Hillary Clinton and Barack Obama were nowhere to be found following Trump’s speech. In fact, neither has made more than a few appearances in the media at all in the past 12 months. The Clinton camp must still wrestle with the fact that her popularity remains — somehow — lower than that of Trump.

The difficult truth confronting Democrats is that their party is not in much better shape than the GOP. Once the Democratic strategy to frame the election as a result of “Russian hacking” fails, the party’s total lack of an alternative program will be laid bare. Trump’s plans to deport immigrants en masse would never not been possible without a major expansion of ICE’s powers and funding under Obama. Democrats failed to close the Guantanamo Bay concentration camp or end the wars in Iraq and Afghanistan during Obama’s eight years in the Oval Office. And as recently as two weeks ago, the Democrats faithfully supported new surveillance powers for National Security Agency, at the urging of Trump.

Once again, the crisis facing both parties of the rich offers an opening for the working class. But we must seize the moment. If we do not build an independent fight back among workers and oppressed people, Trump’s plans will mean disastrous results for all of us.