Lawyers are throwing their robes at the feet of the Justice Minister. Workers in the Louvre shut down the world’s largest art museum. Firefighters are hosing down government buildings. The working class is in an uproar against Macron’s attacks on retirement benefits and they will not back down. 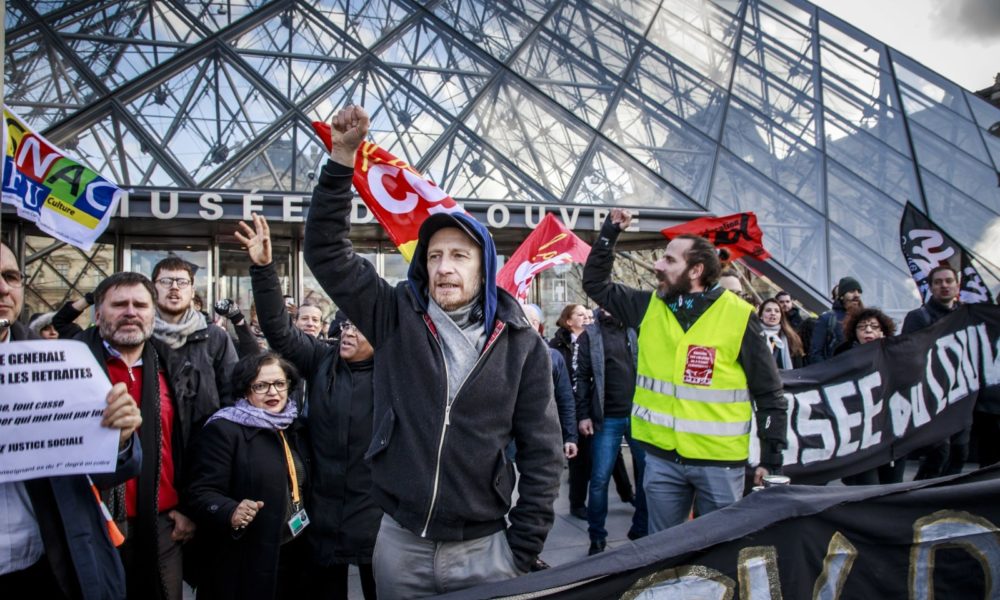 French railway workers remain on strike for the second month in a row and workers across industries continue demonstrations and work stoppages against the government’s plans to restructure the pension system. Meanwhile, the leaders of France’s moderate unions have been in talks with the government to negotiate cosmetic changes to the reform plan and ultimately stop the strike.

These talks came to a head on January 11 when Prime Minister Édouard Philippe announced that he would temporarily withdraw a controversial retirement age increase from the pension reform plan. This move was lauded by some union leaders and the bourgeois media as a success and major concession, a step that was meant to bring France one step closer to ending its longest strike since 1968. Laurent Berger, the general secretary of the CFDT, France’s largest trade union and one of the unions currently in talks with Macron, tweeted:

“We have obtained the withdrawal of the pivotal age from the law; it’s a victory for the CFDT. This unfair and useless measure was a red line for our organisation. The CFDT will now continue its action for a pension system that is fairer and shows more solidarity.”

This is the first concession Emmanuel Macron’s government has made since the strike began on December 5, 2019. The government hoped that this move would make a show of its amenability to working with France’s unions in order to restore order to the country, which has been rocked by social unrest for over a year; however, Macron and Philippe are adamant that they intend to push the bulk of the reform through one way or another.

After announcing that the retirement age increase would not be part of the immediate pension reform plan, Philippe asserted in no uncertain terms that “the transport strike against pension reform will go nowhere. The government is determined.” He added that the strike had already gone on “far too long.”

The “pivotal age” stipulation in the reform plan would give “incentives” for those who work longer before retiring; what this really means is that workers would not receive their full pensions unless they worked at least two extra years, raising the standard retirement age from 62 to 64 across industries. This move was a slap in the face to sectors of workers like railway workers who have fought hard over the years for an early retirement age to compensate for the demanding nature of their labor. Certain workers would have to add up to ten extra years to the length of their careers in order to earn enough to live out their retirement.

It should be evident that the only reason that the government has moved at all is because of the coordinated actions of hundreds of thousands—millions by some estimates—of workers across France, from electrical workers to opera singers and teachers; however, we must see this maneuver for what it is: a move to divide the strike while moving ahead with most of the planned reforms.

A Bad Deal for Workers

The union bureaucracy and the government are celebrating the agreement as a win for the movement against the reform. However, it in no way represents the demands of the rank and file workers who continue to demonstrate in their workplaces and in the streets. In solidarity with the striking workers of the RATP and SNCF, whose leaderships refuse to come to the table with government officials, members of the CFDT and UNSA—two of the unions who negotiated the deal—have called out their own leadership’s backroom deals, which absolutely do not challenge Macron’s plans to overhaul France’s social programs. Some have even ripped up their membership cards and are calling for the extension of the strike.

On January 17, railway workers from the inter-union coalition of the RATP and SNCF led a march to the headquarters of the CFDT to denounce the unions leaders’ willingness to collaborate behind closed doors. The CFDT leaders showed their true colors by calling the police on the protesters; the police then violently repressed the peaceful demonstration.

But the CFDT is not the only union capitulating to the government. Even the CGT, one of the unions that continues to call for strike actions until the reform is completely withdrawn, publically vilified the workers’ demonstration, saying that such displays only hurt the workers’ struggle by turning unions against each other. The militant CGT has played a complicated role in the strike so far; the rank and file has pressured its leadership to continue the strike action, but the leadership participated in talks with the government early in the movement and its elected officials have now agreed to participate in a “conference” to discuss how the government will cut social programs. While workers take to the streets and fight in their workplaces, union leaders prefer to enter into a “social dialogue” with the government.

It is important to note that the withdrawal of the retirement age increase leaves the retirement reform plan intact; during the negotiations, union and government officials agreed to make cuts amounting to nearly $13.5 billion to the pension system. This will lead to decreases in pension incomes by 10 to 20 percent for millions of workers across France. Furthermore, this change does not touch the main indignity of the government’s plan: the restructuring itself. Macron’s plan will standardize pensions to be universal across industries and income will be calculated on the basis of one’s entire career—even including periods of unemployment. It will hit sectors of young people especially hard since precarity in labor continues to rise and young people face difficulties in finding steady work.

Moreover, the deal does not get rid of the retirement age increase at all. It simply puts it off for a couple of years and implements it gradually over five years. This sort of postponement has been the tactic of the government from the start of the strike: in lieu of tangible concessions, it has responded to the strike actions by extending the implementation period of the restructuring. The government is playing a waiting game against the working class and the regime thinks it can win.

The announcement comes at a critical moment in the strike movement. On the one hand, though public support for the strike has grown in the last two weeks, participation has dropped after a full month of work stoppages and demonstrations; railway workers in particular—who have been on strike since December 5—are feeling the effects of 48 days without pay. On the other hand, these last two weeks have opened the opportunity to introduce new sectors into the movement—most importantly those in the private sector—and have consequently seen an increase in participation in certain professions, like education and law.

New actions are drawing attention to the movement and local assemblies of workers are organizing to decide next steps in the face of severe police repression and the union bureaucracy’s capitulations to the government. Furthermore, the strike is taking its toll on the French economy, putting pressure on the government to put an end to it as soon as possible. France’s central bank reported that the strike disrupted the projected growth in the economy, showing a .1% decrease in overall growth for this quarter.

Though participation in the strike has decreased in certain areas, the workers continue to challenge Macron’s government and the union leaders who negotiate behind their backs. Key sectors of France’s workers are still on strike, still in the streets, and still willing to see this movement through to the end—until Macron’s pension reform plan is scrapped once and for all.

As participation begins to wane in important sectors, like transportation, it is imperative that new sectors continue to enter the struggle to generalize the strike. This means that the sectors who have recently ramped up their participation in the movement—particularly teachers and lawyers—must continue to broaden their strike actions by keeping strikes open-ended and coordinating with other sectors like oil workers and dock workers who have paraylyzed France’s major ports and refineries for the past two weeks.

Furthermore, to draw new sectors of workers into the strike and to sustain participation requires a broadening of the strike’s demands beyond the withdrawal of the pension reform. France’s awakened workers have the power to demand much more—they must show the masses that only they can solve the social and economic crises that France’s ruling elite has inflicted on the people. They could fight for much-needed wage increases, and for an end to precarious contracts and unfair dismissals. They could fight to re-establish programs for the unemployed that have been cut under Macron. They could fight for more funding for education and healthcare and demand an end to funding for imperialist conflict in Africa and the Middle East. With this strike movement’s potential to rock the established order, France’s workers could fight to upend Macron’s entire regime.