From Argentina to Athens: Connecting the Revolutionary Left

I spent 48 hours in the Greek capital. My goal: Sharing some experiences of the Trotskyist left in Argentina. The meeting almost didn’t take place because of 15 “nihilist” anarchists. It was pure chaos – and still a good internationalist exchange. 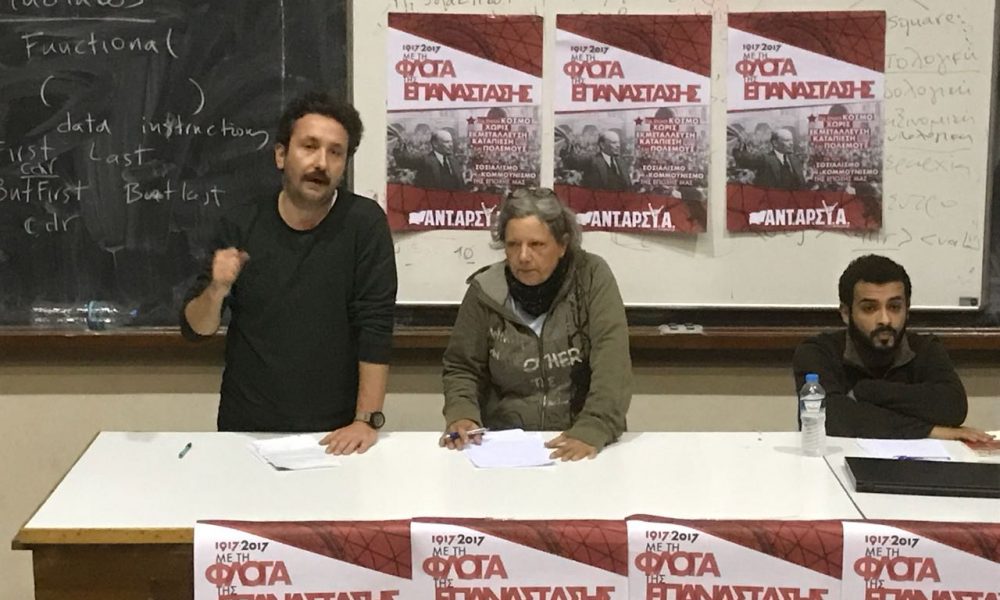 I arrived in the Athens airport on Wednesday night. Workers told me to hurry to the metro station – just ten minutes until the last train would leave for the city! After that, a 24-hour strike would begin.

I was lucky: The last train took me to the Polytechnical Institute in the Exarchia neighborhood. Now officially called the “National Technical University”, this campus was stormed by the military on November 17, 1973 – the massacre of two dozen students marked the beginning of the end of the dictatorship.

Each year, the Greek left commemorates the date with three days of activities. The university is closed for classes. So when I arrived in the darkness, I wasn’t surprised to see the gates barricaded with chairs and tables. I was supposed to attend a meeting by ANTARSYA, a coalition of the radical left. But most of the lights were off and my contact wasn’t answering his phone.

I approached the only open gate, and asked the young men in black masks what was going on. I didn’t understand the reasons for the occupation, but they sent me inside and I encountered an assembly of about 100 people. As Shakespeare said: It was Greek to me! I went back into the corridor and used my phone to show people the ANTARSYA poster. One guy became brusk: “Meeting is cancelled. Good night!”

Greek anarchists are not always friendly to communists, I had heard. I had already closed my jacket to hide my Leon Trotsky t-shirt. I didn’t want to be eaten by anarchists! (Are they vegans?) Now I was writing all my friends. Eventually a comrade in Berlin found the address for the office of the Trotskyist group OKDE-Spartakos (one of the groups in ANTARSYA). Just 400 meters away.

All the comrades were there, eating souvlaki and drinking beer. The Polytechnical Institute had been occupied in the early morning by 15-20 very young “nihilist” anarchists. They weren’t protesting against the state – they were protesting against the left-wing commemoration of November 17, which they found too conformist. A banner at the entrance conveyed their main demand: “Insurrection now!”

The assembly I had seen actually consisted mostly of people arguing against the occupation. “Political” anarchists had issued an ultimatum to their “nihilist” siblings: The 15 young people would re-open the university for the left by Thursday afternoon – or they would get evicted. ANTARSYA debated what to do. Should they fight their way into the building? They could mobilize perhaps 500 experienced fighters, against just 15 occupiers – but would this lead to a years-long feud?

ANTARSYA planned two meetings, on Wednesday and Thursday, with international speakers. The first one, on the 100th anniversary of the October Revolution, was held on the street outside the Polytechnical. 150 people listened to speakers from different left-wing currents from different countries. But what to do for the second event?

After three o’clock on Thursday, one hundred political anarchists gathered at Exarchia square and demonstrated a few blocks to the university. In the end, their was no street battle. The occupiers capitulated peacefully and withdrew to a lecture hall. Minutes later, several hundred young activists from the anticapitalist student front EAAK (close to ANTARSYA) arrived as well – with linked arms, motorcycle helmets, and thick poles just barely disguised as red flags. They didn’t have to fight – just break open the locked gates. Soon the courtyard of the Polytechnical filled with hundreds of young people chanting in memory of the murdered students and calling for the expulsion of US military bases.

Meeting on War, Imperialism and Internationalism

The sun was already setting. Would the ANTARSYA meeting take place in the backup venue, the Athens trade union federation? Or could they open another room at the university? The meeting was due to start at 6pm, but finally began in a massive lecture hall at the Polytechnical just after seven. A minor victory after two days of chaos. Some 200 people were in attendance – small for ANTARSYA in Athens, but not surprising given the endless changes of time and venue.

The list of speakers was rather eclectic – ANTARSYA is, after all, a coalition of radical left groups from different backgrounds. The international guests included speakers from two Turkish organizations – EMEP (Hoxhaist) and SEP (Trotskyist) –, the People’s Front for the Liberation of Palestine, the United Communist Party of Russia, the current “Anticapitalism & Revolution” from the New Anticapitalist Party (NPA) of France.

The event consisted of ten-minute statements by speakers, without any real debate. A small exception was made by the comrades from Turkey. The speaker from EMEP had argued, in a very abstract way, that “revisionism” in the Soviet Union was responsible for the failure of revolutions in the Middle East. He was referring to the theory by Mao, taken up by Hoxha, that the Soviet Union after Stalin’s death became a capitalist-imperialist power. The speaker from SEP, in contrast, reminded the audience that Stalinism both before and after Stalin’s death betrayed working people in the Middle East. In 1948, the Soviet Union under Stalin was the first country to give diplomatic recognition to the state of Israel. Despite all of Stalinism’s betrayals, Stalinist currents still have a surprisingly strong influence on the left in Greece and Turkey.

I had travelled from Berlin to speak on behalf of an international tendency, the Trotskyist Fraction, about the experiences of our Argentinian section, the PTS. The Workers’ Left Front (FIT), a coalition of three Trotskyist parties, has gotten 1.2 million votes in national elections. We think this is an example for the left around the world: Many opportunists think that we need to join up with reformists in order to gain mass influence. But the FIT proves it is possible to talk to millions with a revolutionary program.

I have published the full text of my speech on this site.

On Friday at 3pm, people started gathering for the demonstration to commemorate the students killed 43 years ago. The front banner was carried by old comrades who survived the massacre. It was followed by several thousand students. After that was a block by the different groups that make up ANTARSYA, totaling at least a thousand people. Then smaller leftist groups – Trotskyists, Maoists, Stalinists, anarchists. Towards the end came groups that had emerged from SYRIZA, such as the reformist Popular Unity as well small centrist groups of Trotskyist origin like DEA and Xekinima.

Who was at the back of the demonstration? Yes, the 15 young “nihilists”, still wearing masks and demanding “insurrection now”.

There were a total of 10,000 people. At the same time, there were separate demonstrations by the Communist Party (KKE), who refuse out of principle to march together with other left groups. And there were small events by the two reformist parties, PASOK (who have almost disappeared) and SYRIZA (who are in government). SYRIZA used to attend the left demonstration, but they are rightly afraid of being attacked after having applied brutal austerity policies for years.

I had to leave the demonstration just after it started – my flight back was leaving just 48 hours after I arrived.