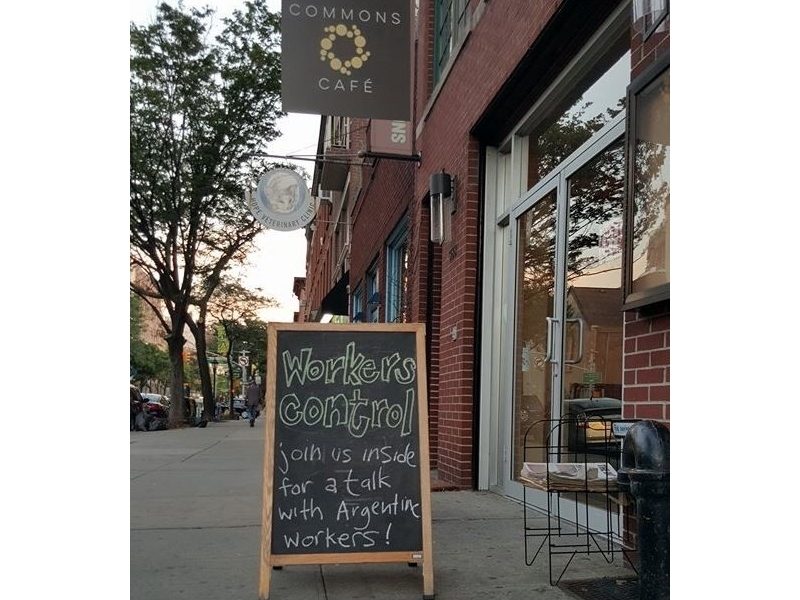 Sponsored by Left Voice and The Marxist Education Project, the event kicked off with a sum-up of the story behind the worker-managed factory : the long organizing endeavor inside the plant, the fight against the union bureaucracy, the formation of the women’s committee and the take, right after the company decided to shut down the plant.

The bilingual conference, which happened entirely over live video, began with three workers and a member of the women’s committee apologizing for the few spokespersons present, as they were preparing to block the Panamerican Highway the following day alongside the workers of WorldColor, another occupied printing factory in which workers were fighting for the right to resume production. This was met with enthusiastic applause; hearing of the combative struggle, the people who were gathered contributed generously to the MadyGraf and WorldColor solidarity fund.

The workers went on to answer many questions from the audience. They described how they convened regularly in assemblies and eventually wrested the shop-floor committee from union bureaucrats’ hands in 2005. Thus, they formed the organizational and political foundation for a quick and decisive response to Donnelley’s abrupt plant closure in August 2014, when the workers took control the very next day.

Today, the same democratic method of assemblies is used to make important decisions in the factory, ie., to assign specific positions in the production process, to carry out administrative tasks, and to agree on new hires.

The worker-representatives emphasized that their aims went beyond the formation of worker-owned enterprises or cooperatives. They have experienced the limits of isolated struggles and brutal competition within the capitalist system, and instead call for expropriation and nationalization under worker control. They declared that the working class was “one and without borders,” needing to unite and build a revolutionary movement for socialism. Most recently, about 50 MadyGraf workers ventured into the electoral arena as candidates of the FIT.

This first event organized by Left Voice in New York City was warmly welcomed by activists and left militants, who expressed enthusiasm for the newly launched website. Many went home with a MadyGraf notebook in tow – 10,000 of which were printed and bound by the workers to distribute to children in low-resource schools. Similar talks were held recently in Baltimore and Washington, D.C. with the same success.

If you missed the event, you can view a recording here .