From Puerto Rico to Minnesota, Teachers are Rising Up Again

With inflation continuing to rise, contract struggles, particularly among public sector unions, could become increasingly militant as workers look to regain lost wages. Already, teachers in Puerto Rico and Minnesota are leading the way with strikes, strike votes, and demonstrations. 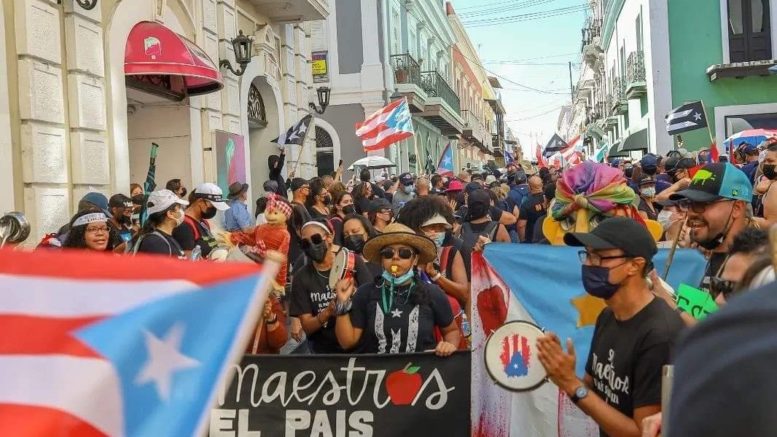 In the last two weeks, teachers in both Puerto Rico and Minnesota have taken to the streets. Though separated by thousands of miles, and a temperature difference of about 60 degrees, their demands are in many ways very similar: Like the teachers who went on strike in 2018, they are marching for better pay, better benefits, and greater funding for schools. However, these struggles are taking place in a period very different from 2018. The pre-pandemic strike wave was driven by decades of austerity and rising rank-and-file militancy born of frustration with do-nothing labor bureaucrats. The pandemic has since galvanized workers even more, especially since rapidly rising inflation has significantly chipped away at already historically low wages. As contracts expire, it is quite likely we will see more militant labor actions in cities across the country. More workers, particularly public union workers facing state budget crunches, are likely to take up the fight to protect themselves and their communities, and to regain what they have lost to inflation and decades of underfunding of public services.

In Puerto Rico, this is already happening. Tens of thousands of public school teachers and thousands of other public workers have been taking part in ongoing strikes and demonstrations in cities across the island. These workers are fighting against cuts to their retirement plans that would force some to work many years longer before qualifying for full retirement; demanding a significant increase to their abysmally low pay; and calling for an end to the most recent debt repayment deal negotiated with U.S. creditors, which would decimate the territory’s public finances.

Puerto Rican teachers currently make only $1,700 a month and have not received a raise in more than a decade. This is far less than what is needed to survive on the island, and many teachers are forced to take second or third jobs to get by. Thanks in part to these demonstrations, the governor has promised to at least temporarily increase that wage to $2,700, still $800 less than the $3,500 minimum per month unions were demanding. These teachers have been joined by other public sector employees as well as restaurant workers, who are also calling for better working conditions and higher wages, a trend that could spread as demonstrations and strikes continue.

Meanwhile, hundreds of teachers from two Minnesota school districts — St. Paul and Minneapolis — defied the bitter cold on Saturday and rallied to demand smaller classrooms, safer workplaces, expanded student services, and higher wages. In Minneapolis, members of The Minneapolis Federation of Teachers began voting on a strike authorization plan on Monday, and St. Paul teachers are expected to begin voting on a similar resolution on Thursday. While a strike authorization would not lead to a strike immediately, it might lay the groundwork for strikes in the two biggest school districts in Minnesota.

In a city wracked by several recent episodes of racist police violence, including the killings of George Floyd and Amir Locke, educators are also calling for more mental health resources for their students. As one Minneapolis teacher explained: “Students in Minneapolis and St. Paul have been in the epicenter of a global social justice movement, and they deal with COVID-19. I don’t think that people understand the stresses that they’ve been under, and they’re still attempting to learn.”

Such demands for smaller classes and improved student services were a hallmark of many of the teachers’ strikes in both 2012 and 2018, showing the degree to which struggles around wages and benefits for public service workers can be expanded to include the needs and demands of entire communities. It also shows the willingness of unions to consider strikes as an offensive measure. For decades, public service workers have tended to put the vast portion of their energies into lobbying their state legislatures, wasting hundreds of millions of dues dollars in outreach and get-out-the-vote campaigns for Democratic politicians, even as unionir budgets continued to shrink each year. Breaking free of that trap will not be easy, but these actions, alongside rising inflation, point toward the possibility of a new wave of public sector workers’ struggles.

To win these battles will require the involvement of rank and file teachers and workers across all sectors, as well as the participation of the students and communities that they serve. Only by linking these coming struggles with the broader needs of working people and the poor can they truly succeed. This will also require a continued and relentless confrontation with the misleaders of the labor bureaucracies, who will invariably seek out compromise and labor peace and will attempt to hold back and undermine the most militant actions and tactics of the rank and file. Building a truly fighting labor movement will not be easy, but the coming battles may very well offer an opportunity to do just that.