From Queer Liberation to Socialist Revolution

There is no revolution without queer liberation. The Following is a speech on the 50th anniversary of the Stonewall uprising by Left Voice editor Tatiana Cozzarelli given last December 13th at Left Voice magazine’s issue #5 launch party. 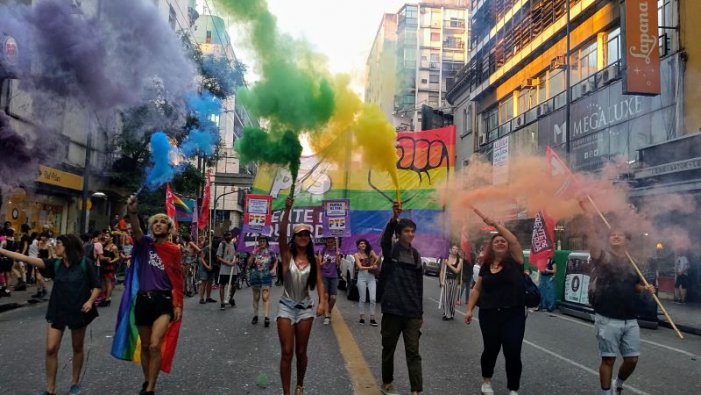 2019 was the 50th anniversary of the Stonewall uprising. The most marginalized of society—trans women of color, oppressed by transphobia and heterosexism, by hyperexploitation or not being able to find a job at all, oppressed by patriarchy and racism—they rose up, and alongside other left groups, other oppressed people and community groups they fought the police in the streets for six days.

Much of the queer community sees Stonewall as the birth of the LGBT movement’s history—and in that way sees only a rightward shift. The narrative goes like “In the past we were super radical, and now … we have Pete Buttigieg and a big corporate Pride.”

But that’s not actually the history of queer organizing. In fact, it’s not the history of organizing of any oppressed group: There are always assimilationist and nonassimilationist wings of movements, and early queer organizing is the same way. The homophile movement and their early organizations like the Mattachine Society wanted to assimilate. They were “patriotic,” they were transphobic, calling their members to fit into rigid gender roles. Members of the Mattachine Society called on all dues-paying members to write letters to legislators regularly. Assimilationists love their lobbying—then and now!

We see these kinds of assimilationist sectors in all oppressed groups. These sectors see the essential structure in society as just and see equality as a ladder: If we just accumulate one right after another, we can reach liberation. Oppressed groups are multiclass sectors, and these assimilationist groups represent the most privileged sectors: the Buttigieg, Barack Obama, and Hillary Clintons among us, representatives of the capitalist class even though they are also part of oppressed groups.

And indeed, the LGBT movement today is dominated by these assimilationist groups like the Human Rights Campaign, which refused to take up trans rights for a long time (and even now hardly does) and which gave Jeff Bezos an “equality” award. They fight for an incredibly limited scope of “gay rights,” like marriage and serving in the military. And how do they propose to win gay rights? Million-dollar galas and cozying up to the Democrats and the capitalists. What is different today from the time of the homophile movement isn’t that there is an assimilationist rights-based group, but that the Democratic Party actually wants to attend these million-dollar galas and co-opt the movement. To a great extent they have.

But LGBT people have another combative legacy—the legacy of Stonewall. They wanted to change everything. They talked about revolution. But they didn’t have a clear plan to get there and were eventually broken up into smaller groups with different strategies—lesbian separatism, gay assimilation, direct action, queer nationalism, etc., and they were all eventually sucked into the nonprofit-industrial complex, especially as the need for services became dire during the AIDS crisis.

But in both of these moments—homophile and Stonewall—what was seen as “existing” communism, in the form of Stalinism and Castro’s leadership in Cuba, turned its back on LGBT people. This was a break with the politics of early communism and certainly of the Bolsheviks. The early communist movement defended Oscar Wilde, and the Bolsheviks decriminalized “homosexuality.” Stalin and Castro both persecuted LGBT people, tainting the banner of communism and creating a rift between LGBT struggle and what was seen as socialism—even though Castro and Stalin don’t represent socialism at all.

The fall of the Stalinist bureaucracy seemed like the end of history, and capitalist democracy began to undertake some reforms and to integrate some gay people and other sectors of oppressed people, like women and people of color, in positions of power, feeding the illusion that we can win equality in this system. Many of the groups that attempt to keep up the combative and intersectional movement of Stonewall have been pushed into the nonprofit system, struggling to get by, struggling to offer the services that the state should give us for free, and begging for money from the very institutions we want to crush.

And that’s the thing with anti-assimilation, with nonprofits that are attempting to serve the most oppressed. It’s not enough to offer services and build some safe communities. Even mutual aid is not enough.

I don’t want the margins. I want to crush this system that kills undocumented trans women like Roxanna Hernandez in detention centers, and kills trans women like Layleen Polanco, who died in Rikers Island during Pride month. I want to crush this system of borders and prisons and exploitation and of eight billionaires who control half the world’s wealth—a system that needs gender roles because it needs to justify that it is mostly women who do unpaid labor in the home. It needs oppressed people to hyperexploit to make a profit. So I know queer liberation is not like a ladder because this whole system has to go.

We need to crush this system of capitalist exploitation, and we need to build a new one based on broad democracy of the working class and oppressed. We need socialism—but not the Stalinist bullshit that isn’t even socialism and that tainted socialism for generations. And not the reformism and faith that elections and capitalist politicians are going to fix it. We’ve seen again and again that they will trade our rights or the rights of people in other countries in the hope of crumbs and call it progress—and I’m sorry, Sanders supporters, but I’m talking about Bernie Sanders here and his imperialism and his votes against sex workers.

And that’s why we need the ideas of revolutionary socialism, the ideas we try to put forward in Left Voice and in this magazine: this magazine that talks about socialist strategy, that talks about Black struggle, queer struggle, and the uprisings around the world—this magazine that poses the need for us to build a revolutionary organization in the heart of the imperialist empire. Because, to be honest, uprisings will come—even here. But an uprising in itself is not even enough—as heroic and beautiful as it is, be it Stonewall or Chile or Lebanon. We need a group—a political party—that can help push that uprising toward socialism, using the strength of the working class. Because if the working class is strong and organized in our workplaces, we can put an end to this whole system.

We can also use the strength of the working class to fight oppression. A small example would be our comrades in the PTS in Argentina, comrades who in one factory went on strike for a trans woman to be allowed to use the women’s bathroom, and only a few years later those same workers took the factory and put it under workers’ control. And those things are not unrelated. When the working class unites, not by compromising with the rights of the most oppressed, but by fighting for the rights of the most oppressed, that’s when the working class is strong. In the end, that’s a working class that can make a socialist revolution. We need to fight for the rights of all the oppressed now, for every reform we can get right now. But also, it’s after the revolution that the real work will begin, the work of really undoing the prejudices that society has ingrained in all of us—the prejudices that capitalism instills and profits from but that communism has no need for.

While it may sound idealistic, I don’t think it is. I think about Chile and the fact that despite all the anti-indigenous prejudices, the flag that is most flown in the uprising is the Mapuche indigenous flag. And I know that when we lose our fear again, when we rise up in the spirit of Stonewall again, there will be Mapuche flags and the wiphala and the trans flag and the rainbow flag and the red flag, flown by the working class and oppressed, who know that our fates are deeply connected and that our enemies, the cops and the capitalists, are the same.

This time, we’ll do more than just rise up. If we can organize ourselves in a revolutionary group that pushes for socialism, I know we can win.