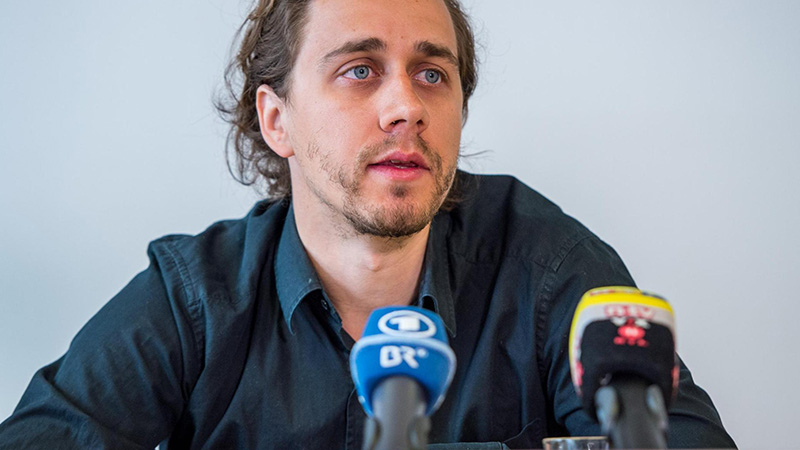 On Friday you will be standing trial. What are you being charged with?

Specifically, I am being charged with a violation of the law of associations. In March of 2017, I uploaded the flag of the Kurdish organization YPG as my background image on Facebook. Over the course of the following month using house searches and other investigations more evidence was collected, and a lawsuit was put together. The district court originally declined the motion for a penal order, but the prosecution complained about it at the criminal division of the regional court and claimed that it had to be dealt with in court.

The trial is taking place on December 14 at 9am – most likely it will not be the last day of the trial. Depending on who wins in court, the opposing side will quite surely appeal the decision. We will appeal the decision if we don’t win the case, and according to our estimate the prosecution will do the same.

Apart from that, there are further charges and investigations against me – be it because there were images with the flags of the Kurdish women’s organization YPJ on my computers which were seized during the house searches. Or because I carried a flag of the YPJ in a protest march, or because I made other posts about the topic. There even was an investigation because I shared an article of a major German newspaper, Süddeutsche Zeitung, in which a flag of the YPG was visible. This article was about the investigation against a buddy of mine who had shared an article of the regional television station Bayerischer Rundfunk about our house search. Those are the kind of absurd investigations that are active at the moment.

Yes, this absolutely is an attack on the freedom of the press and the freedom of opinion. I am being prosecuted for sharing a picture on Facebook. And the prosecution is targeting individuals and media when they report on it. Clearly, it is about intimidating people and depriving them of the right to express their opinion. Even by the standards of bourgeois law this is an absurd farce.

We can see this in examples like in Hamburg, too, where a Turkish journalist was pulled out of the press conference of Merkel and Erdogan and was later to be deported. Kurds are suffering even more under these kinds of repression. They go so far as to threatening people who show solidarity with Rojava or Kurdistan with deportation or with complications with their residence status. This is rather staggering.

One thing I would like to emphasize is that not only the freedoms of opinion and of the press are under attack here, but also the right to representation, the right of people to organize themselves. This weighs even more heavily, because the intention is to keep Kurds from articulating a common goal.

You have already told us that you are not only facing trial for posting on Facebook. What else can you tell us about the other charges and investigations?

Yes, that’s not the only charge against me, and it’s not the only investigation in these cases. There was this absurd case with the press articles from the Süddeutsche Zeitung and the Bayerischer Rundfunk, which I have already mentioned. In those cases the investigations were probably closed again because we created quite a lot of publicity here in Munich. The case against Johannes König, who was the first to be stuck with such an investigation, has since been withdrawn. That case obviously became a little too delicate for them, because journalists, too, made inquiries and researched.

But this does show that the state authorities by now dare to do something like this. That’s actually quite dangerous. This attack on the freedom of the press has not yet succeeded as they imagined, but they try. Where this can lead, we can currently see in Turkey.

Then investigations were initiated against me for carrying a flag in a march, and other similar cases. Usually then several people receive such reports. We have uploaded pictures related to Afrin or the war in Syria, and because of that there are further investigations against us.

It doesn’t stop, and I do think that is an attempt to silence us. Because they cannot prevent solidarity politically, they are trying to do so in the courtrooms.

The charges against you are part of a larger campaign against the Kurdish movement and solidarity structures. What connections do you see?

The bigger context is of course the war in Syria and the interests of imperialist states. Here in Germany there is the interest of the federal government and thus also of the capitalists in Germany to maintain influence in the region, both diplomatically and economically. A large part of arms supplies from Germany go to this region. It is also still a region rich with resources and accordingly there are interests in maintaining this flow of resources. There are larges markets – many goods are exported particularly to Turkey, and there is always the possibility of making investments.

This being the case, there is a great economic interest behind these processes. The Kurds suffer from this, and drawing attention to it makes you unpopular. We show that these interests are contrary to the interests of the local people. That’s why there is such persecution.

They can’t prevent solidarity politically, that’s why they try to do it secretly or semi-publicly in the courtrooms. They make laws in order to criminalize us for showing solidarity.

And, of course, this must also be seen in the context of the fact that there is an interest in criminalizing the solidarity structures and movements here on the ground. Because it is unpleasant for the German government when people come together here, organize themselves here and attack the German government and German capital here.

What can people do to support you and other affected people?

So first of all, we are of course happy about any support we get – whether through social media or through expressions of solidarity or demonstrations. Over the last two months we have built up a solidarity campaign in Munich, in which the Red Aid, a support group for victims of political repression, the party Die Linke, we as the Marxist Youth and other groups in Munich are involved. Because the repression in Bavaria is particularly strong, it starts from Munich, but the campaign has a nationwide character. We therefore hope that there will be solidarity throughout the entire German-speaking area: on the one hand naturally in the form of donations, but we know that we cannot stop this repression with donations, but only politically.

Furthermore, we ask people to come to the trials. Everyone who is facing a judge and a prosecutor is happy to have people behind them. My trial begins, as I have already mentioned, on December 14 at 9am at the Munich district court.

You can find out more on our campaign website. In the upcoming weeks we will continue to list the current cases there, as well as the donation account, dates for rallies, etc. You can also sign an open letter which is available on the website in both German and English. So there is a broad spectrum of how you can support us.

Rally against the criminalization of YPG and YPJ

Activists, like in this case our comrade Benjamin Ruß, who protested against the ban of the YPG, are currently being criminalized and face police repression. On Friday, 14.12.2018, a trial will take place against our comrade, who is accused of violating the law on associations – because of the charge oh having shared the Kurdish YPG flag on Facebook.

We call for solidarity to be made visible and to support him on this day in the rally as well as in his trial.

Stop the criminalization of the Kurdish liberation movement!