For the past three months, a large plot of empty land in Guernica, Argentina has become home to thousands of people facing homelessness as a result of the country’s worsening housing crisis. On Thursday morning, the “progressive” Kirchnerist government of the Province of Buenos Aires sent the police to violently evict the encampment, setting fire to people’s shelters and displacing thousands of families. 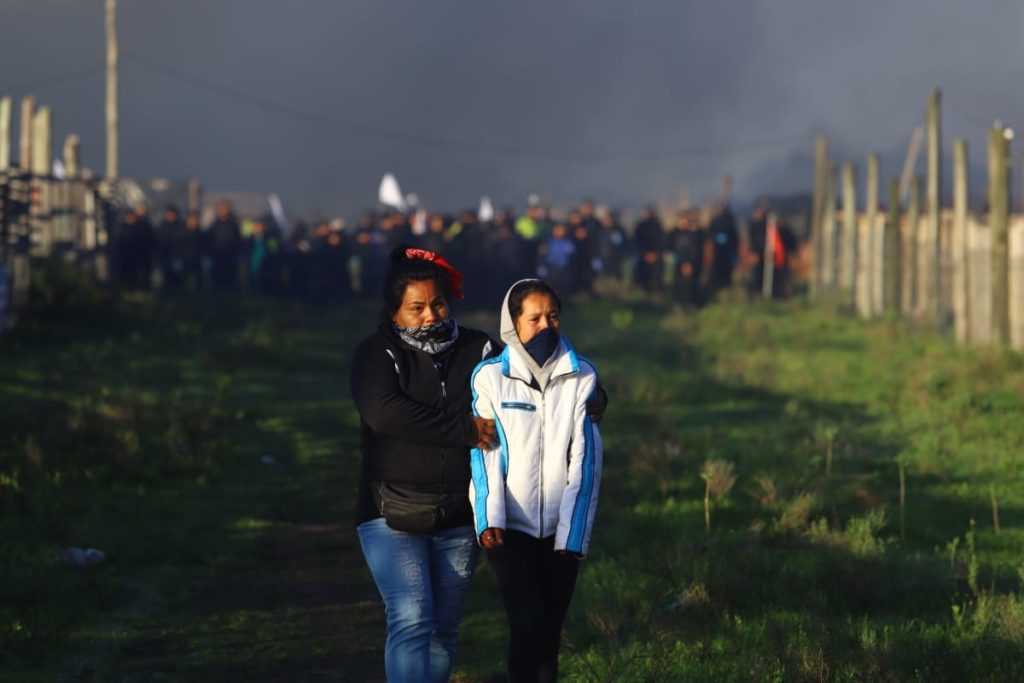 Early in the morning on October 29, more than four thousand cops evicted thousands of people living in tents and makeshift settlements in an empty plot of land in Guernica, one hour south of the City of Buenos Aires in Argentina. The operation was coordinated by Axel Kicillof, Governor of the Province of Buenos Aires and close ally of former president (and current vice president) Cristina Fernandez de Kirchner.

Housing has always been a critical social issue in Argentina, but over the past two decades it has reached new levels of urgency. According to the government’s own estimates, one family out of three suffers some level of housing precarity, ranging from lack of sewage and other basic services to outright homelessness. The pandemic and economic crisis has only worsened these conditions.

In late July, thousands of families found themselves no longer able to afford rent and were pushed to seek an alternative. Dozens of land occupations took place across the province of Buenos Aires and elsewhere in the country in the month of July alone. In the case of Guernica, approximately 1400 families — around 4000 people, many of them single mothers and children — set up tents and shacks made of wood and tarps. For over three months, during the height of Argentina’s winter season, these families have occupied this land, facing freezing temperatures at night and heavy rain every few days.

The families living in Guernica have created a community for themselves on this unoccupied land; decisions are made democratically in committees and assemblies organized by the four different neighborhoods in the settlement. The largest neighbhorhood, “La Lucha” (“The Struggle”), even formed its own women’s committee to take up critical issues facing the encampment. This women’s committee, with the support of political and social organizations in Argentina, was able to establish a small school for the children living in Guernica. Through their patient but relentless work and their unrepentant combativity, the committee has been instrumental to everyday life in Guernica and in taking up the concerns of the women and children living there.

From the beginning, the occupation received strong displays of solidarity from various organizations, groups, and communities. Militant currents in Buenos Aires’s most combative unions, political organizations, human rights organizations, as well as political figures from the Workers’ Left Front, organized countless donations of food, clothes, and other necessities for the families living in Guernica. Healthcare professionals and students established a health post for check ups and primary care for residents.

Though the plot of land has stood empty for years, it is owned in part by real estate developers, such as Bellaco Ltd, which have “plans” to build gated communities and luxury housing for high-income families. Taking the side of these real estate interests, the government has responded to the occupation with hostility from the beginning. The police have been sent in to intimidate and harass tenants, and a judge recently blocked a motion to allow building materials to be sent into the settlement to improve tenants’ living conditions.

The government has played a double game from the beginning of the occupation: On the one hand it has offered partial, insufficient solutions and tried to divide the people in the encampment with conflicting proposals. On the other it has held the permanent threat of eviction over tenants’ heads, intimidating and harassing families and trying to break their morale.

In its latest, “best” offer, the government was supposedly willing to grant a piece of land to only half of the families, with a six-month wait in a temporary (unspecified) location. But without a written agreement, this was nothing but empty promises; when the delegates demanded a more concrete proposal and for the offer to extend to all families in the occupation, the government abandoned the negotiations completely and announced that an eviction was imminent.

On Thursday at 6 a.m., a massive operation of thousands of police swept the area, shooting rubber bullets and tear gas at tenants and into their shelters. Bulldozers trashed some of the makeshift houses; others were set on fire, along with all of the occupants’ belongings. Even the presence of children did not represent an obstacle for security minister Sergio Berni to unleash ruthless repression and sweep thousands of houseless families out of the area. The police were also quick to repress allies who showed up to express solidarity and stop the eviction, including individuals from human rights organizations and student unions, as well as congressmembers like the PTS’s Claudio Dellecarbonara.

Countless people were injured during the repression and dozens were arrested, including several students who put their bodies on the line to protect the encampment. The government of Axel Kicillof, with the backing of Cristina Fernandez de Kircherner, has shown once again that in moments of crisis, real estate corporations’ speculative profits matter more than working-people’s basic needs. Behind the human rights rhetoric, progressive speeches, and its discourse of a “national and popular government,” Argentina’s “center-left” Kirchnerist government is just another government at the service of capital.