Thousands of textile workers in Haiti have walked out to demand higher wages. The strike shows growing militancy among one of the most hyper-exploited sectors of capitalism’s imperial hierarchy. 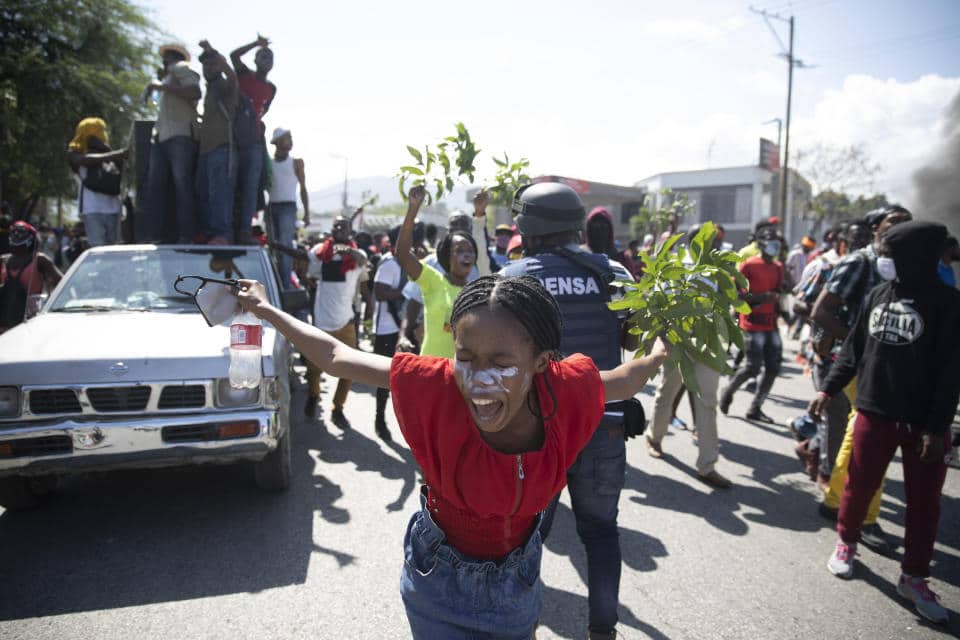 Thousands of textile workers from Haiti’s assembly and export industry are leaving the factory floor and taking to the streets of Haiti’s capital city, Port-au-Prince. This predominantly female workforce is engaged in textile manufacturing and assembly for export to clothing giants like Levi Strauss, Gap, and Nike. The peaceful walkout was almost immediately met with police repression in the form of tear gas, beatings, and arrests, as the protestors marched to the residence of prime minister Ariel Henry. Nevertheless, protestors re-grouped for a second day to continue the fight for a higher minimum wage, and their ranks continue to swell as the action passes into its second week.

The initial walkout was organized by the militant union group Batay Ouvriye at the Parc Industriel Métropolitain, one of Haiti’s “assembly zones,” duty-free production centers for multinational retailers such as Gap, Old Navy, H&M, JCPenney, and Zara, whose low prices rest on the legalized exploitation of Haitian labor. The initial demonstration on February 9 was entirely peaceful: protestors played music and danced, while others waved small tree branches, a display of non-violent resistance. The protest had barely begun, however, when police fired canisters of tear gas to disperse the crowds. However, the intensity of police repression only emboldened the striking workers, who returned the following day with faces painted to protect against another round of tear gas. According to Konbit Jounalis Lib, at least 15 people were injured in the first two days, 13 of whom were women. As of the weekend, four were still in the hospital, including one pregnant woman.

The demand on the protestors’ lips is a raise in the minimum wage from 500 to 1,500 Gourdes (or HTG, the local currency). Currently, the minimum salary for workers in “assembly zones” like PIM is the equivalent of USD $4.86, for a nine-hour work day, a wage so low it’s derisively referred to as “Aba salè tibèkiloz”, a ‘tuberculosis salary.’ Many workers point out that it can cost nearly 250 Gourdes per day just to get to and from work.

The poverty wages paid to textile and assembly workers in Haiti is no accident: it has deep roots in imperialism. The complex at the center of today’s strikes is one of several administered by the government agency Société Nationale des Parcs Industriels or SONPAI, duty free zones created to enforce the country’s tiered wage system. Though textile workers in Haiti actually fall within the highest tier of the country’s minimum wage protections, companies that contract piece work specifically for export are allowed to pay workers 10% less. This is a legacy of the HOPE and HOPE II acts, passed by the U.S. congress in 2006 and 2008, during earlier periods of labor unrest in Haiti. To pre-empt the Haitian congress’s attempts to raise the minimum wage, the HOPE treaties imposed a U.S.-backed package of trade liberalization, allowing for extremely modest, gradual increases in the minimum wage in exchange for duty-free export of textiles. Leaked cables show how Hillary Clinton’s State Department and the U.S. Embassy leaned on the Haitian government directly, on behalf of companies whose profits rest on cheap Haitian labor.

Back in 2008, when the Haitian congress attempted an ambitious minimum wage increase, a study from the Worker Rights Consortium showed that a wage of 550 HTG was needed just to cover the daily living expenses of a family of three. Thanks to U.S. intervention, the wage rose only slightly, from $0.22 to $0.31, rather than to $0.62, as the government originally proposed. More recently, a 2019 report by Solidarity Center estimated that a reasonable living wage would be four times higher, since workers typically spend more than half of a current day’s earnings just on lunch and transportation. Modest increases have been made since the report, but they are far outpaced by inflation. The workers’ demand today, a daily minimum of 1,500 HTG, is still well below the 1,750 called for in that report.

Haiti’s textile and assembly workers know the fruits of imperialist inequality better than most, and the history of a struggle for a liveable minimum wage shows the lengths to which multinational capital will go to maintain a cheap, exploited workforce. These workers have been told by governments, economists, and business leaders of the Global North that they should be grateful to have jobs at all, that a reasonable minimum wage would drive businesses out of the country. But among those who work for nine hour a day — making articles of “cheap” clothing that cost four times their daily salary — resistance rooted in a sharp class consciousness will inevitably develop, as these protests demonstrate.