Healthcare Workers Across the Country Protest for PPE Over Profit

Yesterday, hundreds of healthcare workers took to the streets in protest of the despicable actions of the healthcare industry, demanding PPE over Profit and saying that the whole system is broken. Some called for the nationalization of healthcare under worker control. 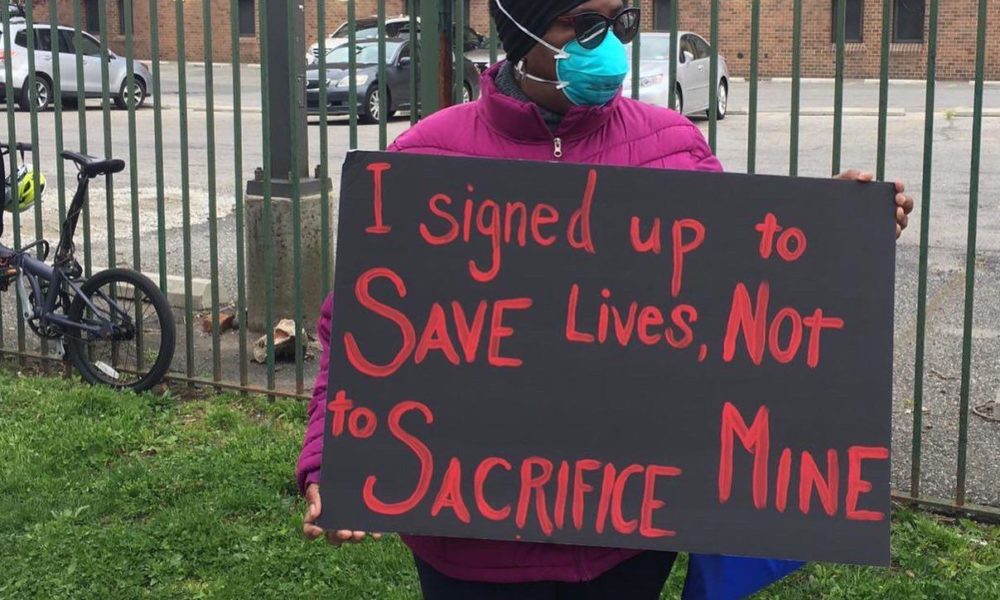 Yesterday, hundreds of healthcare workers took to the streets in protest of the despicable actions of the healthcare industry. Across the nation, healthcare providers have been hit hard with the persistent problems inherent to a for-profit medical system, magnified by the current crisis. Nurses are slammed with unsafe staffing ratios, with some in the hardest hit cities forced to care for 20 patients at a time. Not a single hospital in the nation has been able to supply enough masks to truly protect all staff members and patients from the virus, leaving many with only one mask per shift or none at all. Nurses in Massachusetts organized a  party where they fashioned hospital gowns out of trash bags in preparation for the supplies running out. It is clear that #TheSystemIsBroken. Healthcare workers are on the frontlines of this crisis and the nation is doing the bare minimum to protect them. That’s why the national networks of rank-and-file union members from New York State Nurses Association, Michigan Nurses Association, Pennsylvania Association of Staff Nurses and Allied Professionals (PASNAP), Service Employees 1021, National Nurses United Chicago, and many other unions came together to organize a National Day of Action on April 15, 2020.

Nurses from across the country, you might recognize a few, put this together to publisize the Frontline healthcare workers day of action. April 15. Wear red, car caravan, bring a sign to the socially distanced rally. 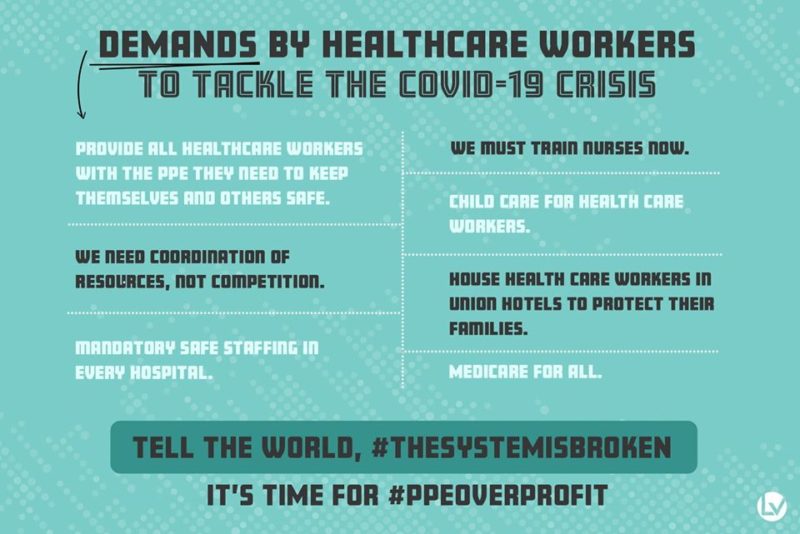 In New York City, healthcare workers gathered in a socially distant fashion on the sidewalk of Kingsbrook Jewish Medical Center in Crown Heights, Brooklyn. The hospital, which is located in a primarily working class neighborhood, has faced steep budget cuts in recent months and is under pressure by Governor Cuomo to close in order to make way for a housing development. These measures have ensured that COVID-19 has hit the hospital hard.  Many of the protesters at the action pointed to the racism embedded in the healthcare system as an important reason why many of New York’s hospitals, and Kingsbrook in particular, have not been given access to even basic resources during the pandemic. Patients at these hospitals are at higher risk of facing severe complications from the virus. Many of the healthcare workers demonstrating on Wednesday have seen their patients die from the disease and then their unprotected co-workers swiftly dying from the virus as a direct result of the criminal lack of PPE. One nurse, close to tears, declared, “We’re helping others but they are not helping us.” Another nurse said that she already has PTSD from the stress of watching innumerable patients die before her eyes. Left Voice comrades and healthcare worers, Tre Kwon and Mike Pappas, drove home the crux of the issue: A for-profit healthcare system will never work to serve the community. Pappas states, “executives (are) there at the top, acting as parasites, to just get large salaries. Workers know what they need. The Workers and the patients and communities can run these hospitals and these industries for themselves.” We must #NationalizeHealthcare.

Healthcare workers from across New York City gathered at Kingsbrook Jewish Medical Center in Brooklyn to protest the dire conditions they face in hospitals ill-equipped to handle COVID-19 after years of budget cuts. They joined frontline healthcare workers across the country in a national day of action to demand adequate protective equipment so they can protect themselves and their patients, as well as the radical restructuring of the healthcare system in order to put people’s health over profit.

Healthcare workers in Detroit began their action in front of the University of Michigan’s Rogel Cancer Center. All healthcare workers were asked to wear proper PPE, stand six feet apart, and wear red in solidarity. In order to include the whole community, non-healthcare workers were given a route to drive up and down and asked to cover their vehicles with signs of solidarity. GM strikers from nearby, members of UAW 174, joined in a car caravan, returning the support they received from the nurse’s union.  #TheSystemIsBroken and #PPEoverProfit were popular amongst the sign holders, coming to join the action at 7:00am and planning to stay until the sky turned dark. One of their demands is to end the hoarding of PPE that they are seeing in their hospitals, and that instead the stockpile of resources be immediately rerouted to New York City, the hardest hit city in the nation.

Healthcare workers in Albuquerque are facing massive layoffs, as hundreds of employees have been furloughed, faced pay cuts, and/or have reduced hours during the pandemic. While some nurses are facing unbearable patient loads, others have been furloughed or fired, all to save the profit margins of CEOs and executives who are facing the crisis in the comfort of their homes, unwilling to help the masses and the frontline workers flatten the curve. Much of the financial impact is due to the postponed elective surgeries that were deemed “non-essential.”  Healthcare workers scatter in front of the University of New Mexico Hospital with signs reading “We Are Essential Not Sacrificial.” Kate Becker, The CEO of the hospital, has refused to respond to these dire circumstances. #CEOsAreNonEssential

Philadelphia RN Mary Adamson lays out why her and her colleagues are on the streets today: “best practices has collided with best profits.” #PPEoverProfits pic.twitter.com/H9XNgmxC6y

Workers from around the country and around the world expressed solidarity with the day of action.

Today is the national healthcare workers day of action! Workers from all over the country express solidarity.

Hundreds more healthcare workers and supporting community members are stepping up to give weight to a list of demands that will help the nation during this pandemic. The organizing efforts of rank and file union members from California, Massachusetts, Illinois and Pennsylvania have further pushed these demands publicly, despite widespread threats of retaliation by employers. However, these initial calls for immediate interventions are in fact  the bare minimum needed. Many hospitals have begun to retaliate against healthcare workers that are speaking out, firing staff members for vocalizing concerns for their lives. Protecting our healthcare workers is essential as we combat the pandemic, but to create a truly healthy society we need to #NationalizeHealthcare. Only under workers control can our healthcare system really work to heal the needs of the masses.