‘Humanitarian Aid’ As a Weapon of Regime Change in Venezuela

Last Saturday, the U.S.-backed leader of the Venezuelan right-wing opposition, Juan Guaidó, was defeated in his attempt to break the army’s support for the government of Nicolás Maduro. After this failure, a military intervention by the United States cannot be ruled out. 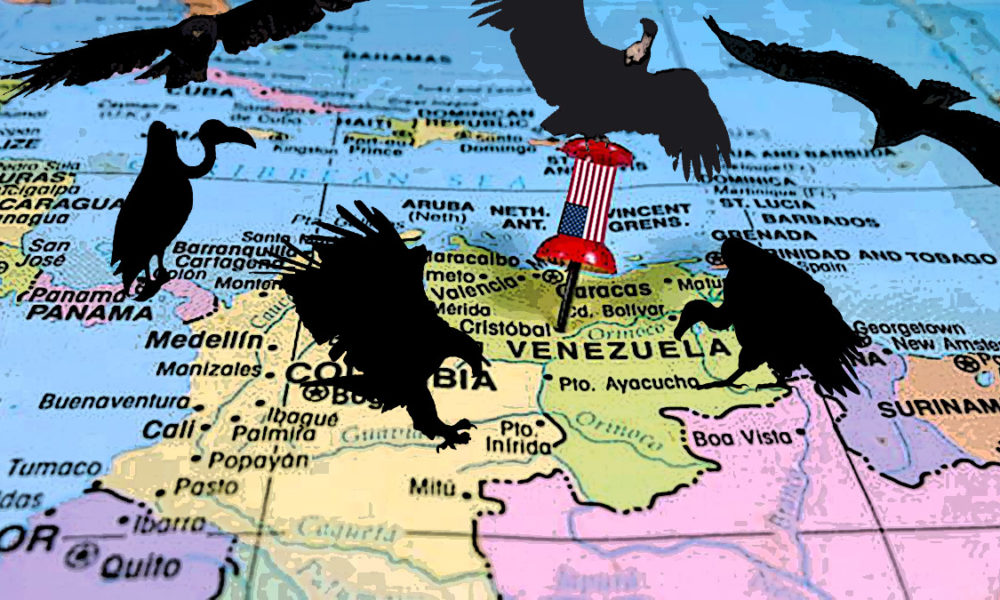 Last week, Venezuelan right-wing coup leader Juan Guaidó called for a “human wave” to mobilize at the country’s barracks in order to pressure the military into turning against President Nicolás Maduro. He also called on supporters to gather at the border with Colombia on Saturday to receive the “humanitarian aid” sent by the United States. The goal was to present an image of chaos to the world and force the Army and National Guard to let in the trucks carrying supplies—signaling a break with the Maduro government.

This maneuver was defeated, sparking an aggressive response by the Venezuelan right, the U.S. state department, and several high-ranking American officials, who have been beating the drums of war since the crisis began last month.

On Saturday evening, Guaidó stated, “The events of today have forced me to make the decision to formally declare to the International Community that we must consider all options to liberate this country, which is fighting and will continue to fight.”

U.S. Secretary of State Mike Pompeo echoed Guaidó’s threats, maintaining that “Every option is on the table. We’re going to do the things that need to be done.”

After Saturday, Marco Rubio, the Republican senator from Florida, focused on searching for a “casus belli” that could justify a military response, using his Twitter account to spread lies, such as the claim that shots were fired into Colombia from Venezuela.

This most recent confrontation was sparked by the delivery of U.S. “humanitarian aid” to the pro-coup right. But these imperialist actions are motivated by nothing humanitarian.

The U.S. government has cynically justified its open support for Guaidó in the name of restoring democracy and has used the pretense of “humanitarian aid” in an effort to undermine the Maduro government. This aid is nothing by a Trojan horse, meant to strengthen the unelected pro-coup right wing and cause increased tensions in Venezuela. At the same time, the Venezuelan people have struggled with poverty for years, which was compounded by US sanctions as well as Maduro’s austerity measures.

Of course, the use of this humanitarian rhetoric as a means to imperialist ends is not new nor has it been limited to Venezuela. Several countries in the Middle East and Central America have experienced the consequences of such “humanitarian aid” and support for “democracy,” which is almost always a pretense for direct or indirect U.S. intervention.

The Truth Behind the ‘Humanitarian Aid’ Provided by U.S. Imperialism

The U.S. has a long history of using the rhetoric of humanitarianism and of spreading democracy for imperialist interests and to maintain and spread US economic and political hegemony. Although there is too much to write about in one article, I hope to provide at least some examples here.

The U.S. war against Iraq, for instance, was based on a complete lie regarding the existence of weapons of mass destruction in the hands of the Iraqi regime. Afterward, when the lie became unsustainable, the U.S. declared its aim of spreading “democracy” as a way to maintain the invasion.

But even as the US claims to oppose dictatorships in Iraq and Venezuela, it often ignores crimes committed by its allies who have slaughtered thousands, driven millions to hunger and despair, jailed opponents, or disappeared journalists who speak out against the government. Indeed, like Republican and Democratic administrations before him, Trump has strengthened ties with several countries in which human rights violations are a hallmark of their regimes.

One such example is the continued U.S. support for Saudi Arabia, whose war and brutal blockade against Yemen since 2015 have left 70% of the Yemeni population in need of urgent humanitarian aid, with seven million Yemenis facing starvation and thousands dying of preventable cholera. Meanwhile, the bombings by the coalition led by the United States have killed hundreds of civilians, including many children.

Likewise, the White House isn’t concerned about its close ties with a country that, according to 2015 data from Amnesty International, sentenced 158 people to death, most of whom were beheaded, for supposed offenses against Islam, including apostasy, adultery, and homosexuality. The recent case that highlighted the brutality of the Saudi monarchy was the murder of journalist Jamal Khashoggi, an opponent of Saudi royals.

A closer example is the situation in Haiti. The poorest country in the region, Haiti was invaded for years by UN troops led by the United States, with the alleged intention of “stabilizing democracy” and providing “humanitarian aid.” The outcome of that mission, called the United Nations Stabilization Mission In Haiti (UNSTAMIH), was multiple human rights violations during the occupation such as rape perperated by UN troops. In parallel, the island government was required to implement the austerity plans imposed by the international organization.

Haiti’s economy, where more than half the 10 million inhabitants survive on less than $2 a day, grew by just 1.4% in 2018, one of the lowest growth rates in the region. Protests have been going on for weeks against the austerity plan imposed by the administration of Jovenel Moise, a banana industry leader that serves as a puppet for international capital. Where is the concern for democracy in Haiti, where economic plans are imposed by international bodies?

Of course, the very premise that the U.S. government actually cares about providing humanitarian aid to those in need is patently absurd. For the U.S., humanitarian aid is always a political calculation. Even as U.S. Air Force planes drop tons of “aid” at the Venezuelan border in a transparent attempt to install a U.S. puppet regime, Trump has callously reduced the United States’ contribution to the United Nations Relief and Works Agency for Palestine Refugees(UNRWA) from 300 million to 60 million. This has aggravated the already inhumane living conditions of the 1.9 million people in the Gaza Strip, who survive under the oppression of Israeli colonialism. The U.S. government has also supported cutting off power and water to Gaza, the criminal actions of the Israeli state against the Palestinian people (including thousands of children), and through its veto has protected the Israeli government against every resolution issued against it in the UN.

On Monday, the Lima Group (a largely pro-imperialist fourteen member state organization of North and south American countries designed to address the political crisis in Venezuela) met with the U.S. Vice President Mike Pence in Bogota, Colombia and agreed on additional sanctions against Venezuela. The fact that the vice president of the most important imperialist world power has gone to Colombia to promote further sanctions shows the extent to which plans for another, more aggressive coup attempt may be underway.

In this scenario, in which the outcome remains uncertain, it is necessary, first and foremost, to aggressively confront and protest these coup attempts and the imperialist offensive. Of course, this resistance to U.S. imperialism should in no way imply political support for Maduro, who has implemented austerity and repression against the working class. But, Maduro’s failed leadership cannot be an excuse for supporting U.S. imperialism, as some progressive U.S. politicians have done.

On Saturday, U.S. Senator Bernie Sanders took to Twitter to demand that Maduro’s government let in the United States’ “humanitarian aid” and stop the violence against the opposition. This took place precisely as the Venezuelan right, with the support of the U.S. had organized a blatant provocation as part of their plan to carry out a coup. Such statements make clear that Sanders, while opposing U.S. intervention, is happy to provide rhetorical aid to the unfolding U.S.-supported coup against Maduro. Not to be outdone, on Monday, freshman congressperson Alexandria Ocasio Cortez echoed U.S imperialist “democratic” talking points by arguing that Venezuela was a failed state and that the problem in Venezuela was an issue of “authoritarianism versus Democracy,” Of course, AOC did not mention the or criticize U.S. meddling or its support for Guaidó.

The U.S. left should be at the forefront of denouncing the intervention devised by Trump, Pompeo, Abrams, and company. Even though Sanders and AOC promote a progressive platform that has generated enthusiasm among the youth and sectors of the working class, the socialist left cannot lose sight of the imperialist essence of the U.S. regime composed of both Democrats and Republicans and of the fact that socialism is impossible without anti-imperialism. Sanders’ and AOC’s statements show that neither of them have any intention of truly challenging or attempting to transform the imperialist nature of the U.S. regime.

The dire conditions endured by millions of people due to the catastrophic economic situation produced by Maduro’s policies are used to justify a coup against the Venezuelan government. But the workers have nothing to gain from imperialist policies.

It is crucial for the youth and workers who are turning to the left in the heart of U.S. imperialism to embrace an anti-imperialist perspective and to be the first to demand “Hands off Venezuela.”

This article is based on a translation by Marisela Trevin of three different articles from La Izquierda Diario.