ICE Detentions Continue in the Midst of a Pandemic

ICE agents continue to make arrests, even as cities across the United States brace for the COVID-19 pandemic. These actions put detainees’ health at risk, and expose the U.S.’s callous disregard for the lives of migrants. 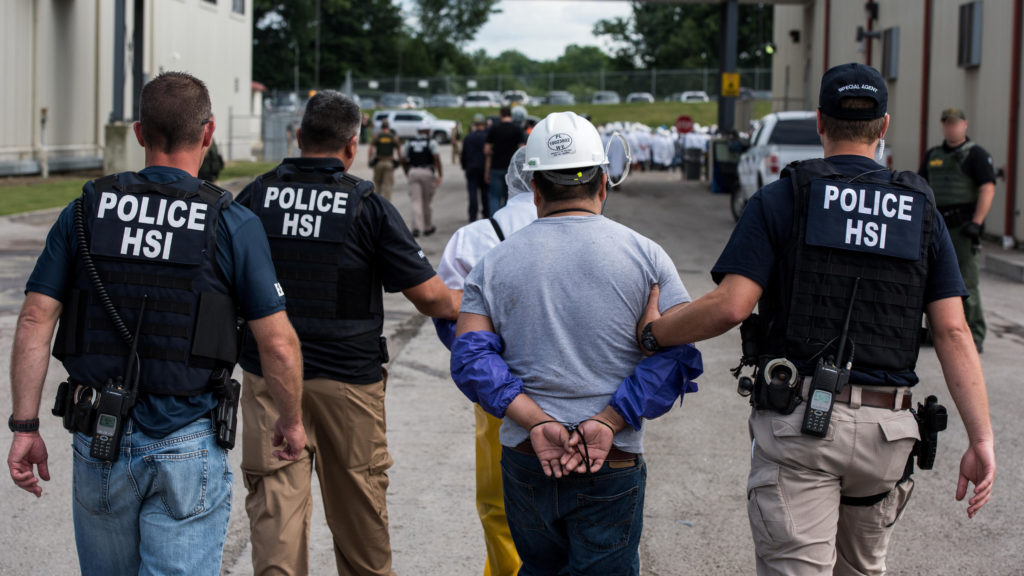 While cities across the world become paralyzed in response to the threat of COVID-19, for ICE agents across the United States, it’s business as usual. This week, ICE agents in Denver, Colorado, and Los Angeles made several immigration arrests – in some cases placing detainees in facilities with quarantined individuals who may have been exposed to the coronavirus.

Echoing the dehumanizing, racist rhetoric routinely expressed by both ICE and segments of society at large, ICE enforcement officer David Marin of Los Angeles said, “We’re out here trying to protect the public by getting these criminal aliens off the street and out of our communities.”

Only on Wednesday night did ICE announce that it would focus on enforcement operations which are deemed “necessary to maintain public safety and national security,” and “exercise discretion” or use detention alternatives for other individuals. However, the agency has not indicated plans to release any detainees.

ICE agents, now assiduously greeting each other with elbows rather than handshakes, have received N95 respirator masks, hand sanitizer, and disinfectant wipes. Meanwhile, detainees are confined to crowded facilities with unsanitary conditions, insufficient access to medical care, and little possibility of “social distancing.” These conditions are a veritable tinderbox of infection. ICE has previously reported outbreaks of the flu, chickenpox, scabies, measles, and even mumps in detention facilities .

Across the country, many courthouses have closed or drastically scaled back their hearings and operations. However, the Department of Justice announced the closure of just 10 immigration courts this week, despite the vast majority – over 50 – remaining open. These courts require migrants, young and old, to pack into crowded hallways and holding rooms while they await hearings.

In Los Angeles, individuals attend their ICE check-ins with 150 other people. In border cities, under President Trump’s Migrant Protection Protocols (his “Remain in Mexico” policy), migrants continue to be forced into crowded group hearings for hours at a time.

In addition to cramped conditions among detainees, detention facilities have “revolving doors” of exposure, including visitors, guards, aid workers, and food workers, all potential carriers of COVID-19. As a detainee said to Mother Jones last week, “If coronavirus gets in here, it’s going to be a massacre… because everyone will get it at the same time… we’re all breathing the same air.”

Many groups have called for the closure of immigration courts and detention centers. Over 3,000 health workers have signed an open letter calling for the release of detainees, citing the danger posed by the crowded, unsanitary conditions, particularly given already strained medical resources. Likewise, the American Civil Liberties Union filed a lawsuit on Monday on behalf of 9 detainees deemed high-risk for serious illness, though the organization estimates that a much higher number is vulnerable.

“It’s a disaster waiting to happen,” said ACLU attorney Eunice Cho. “Immigration detention centers are closed environments, just like the cruise ships, just like the nursing homes that were the site of some of the deadliest exposures to COVID-19.”

Whereas people across the country are urged to avoid travel and cities are increasingly implementing orders to shelter in place, such concerns do not extend to migrants. On Friday last week at New York City’s LaGuardia airport, Representative Alexandria Ocasio-Cortez confronted an ICE officer who helped transport six children from Texas to New York, a major hub of COVID-19. Rep. Ocasio-Cortez questioned why ICE was transporting children in the middle of a pandemic when other travel restrictions were in place.

Current actions toward detainees put lives at risk, and expose the United States’ callous disregard for migrants’ lives. Not only are many migrants risking exposure to the virus because they must continue to go to work each day without the possibility of paid time off, but the continued operations of ICE also discourage many people from seeking care or testing if they get sick.

The cogs of the ruthless American detention and deportation machine keep turning, even during a global pandemic. However, simply moving detainees to  low-density, community-based detention – as medical and humanitarian groups recommend – is not enough. As socialists, we must demand the complete abolition of ICE, the decriminalization of border crossing, a moratorium on deportations, and full rights for migrants.