As COVID-19 ravages communities across the U.S., many experts agree that meatpacking plants, where employees work shoulder-to-shoulder, are the next ground zero for the spread of COVID-19. 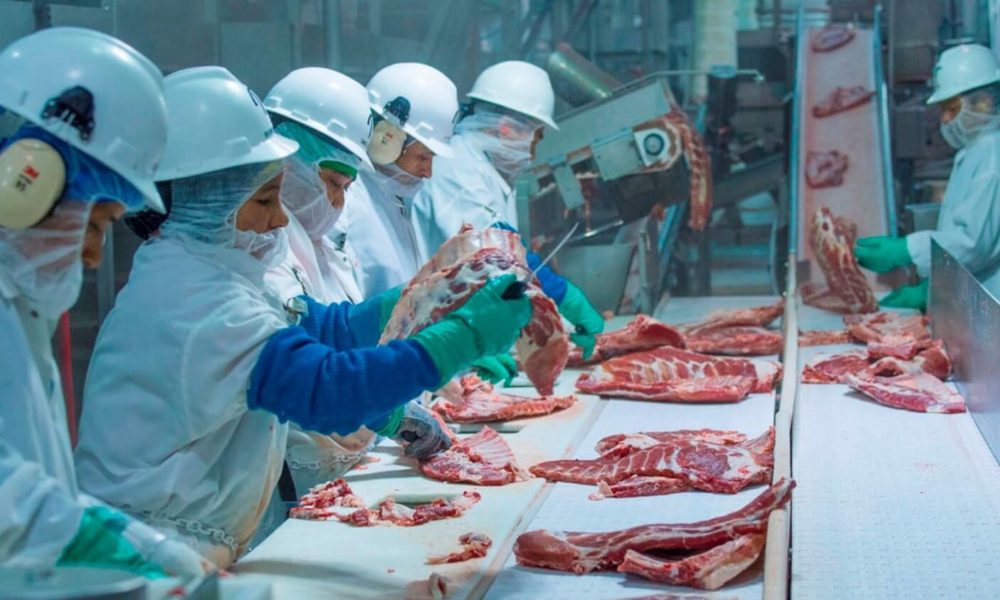 In several rural communities with sudden COVID-19 spikes, many residents say that the meatpacking plants that surround the city and employ several thousand area residents are responsible for accelerating the spread of COVID-19.

The town is ringed by a series of a half-dozen meatpacking plants, where thousands of workers are employed in meatpacking.

Nearby at Tyson’s Food in Camilla, Ga., where more than 2,000 RWDSU union members, two workers have already died from the virus.

“Our members have been pleading with the company for weeks, and the company has done nothing here. When I speak to our members, I hear real fear in their voices, and their voices must be heard,” says Edgar Fields, President of the Southeast Council of the RWDSU, which represents 10,000 workers across the southeastern United States.

In other smaller cities in rural communities across the U.S., towns are seeing spreads of COVID-19 directly tied to poor working conditions in meatpacking plants.

In Greely, Colo., one JBS meatpacker died of COVID-19, and over two dozen others have tested positive for the virus in a 4,000 person meatpacking plant, leading many to fear that the small Colorado city could see a significant outbreak.

It’s not only meatpacking plants with outbreaks, but also food-processing plants.

In Hazelton, Pennsylvania, 180 workers have tested positive for COVID-19 at a Cargill plant.

“Without swift action by the industry, our members will continue to die,” says Stuart Applebaum, the president of the Retail, Wholesale, and Department Store Union, which represents 15,000 meatpackers primarily in the rural South.

Nationwide, meatpackers are reporting that workers are calling out in sick-en-masse and refusing to work in unsafe conditions.

“Most processors I work with have seen a significant increase in absenteeism,” poultry industry analyst Christine McCracken told NPR. “Whether that is due to actual COVID-19 issues, childcare issues (with the closure of schools), or even fear of contracting the disease, it is unclear. In some cases, the decline in available workers is severe.”

With the Trump Administration and Congressional Republicans blocking OSHA from issuing a rule protecting rules for essential employees during COVID-19, workers say they have little choice but to take matters into their own hands.

“In industries and workplaces with already poor safety practices, where injury rates are high, it is clear that safety is already not the top priority — production is what matters most,” says Obama-era OSHA Chief of Staff Debbie Berkowitz, now Director of Worker Health and Safety at the National Employment Law Project

“We are seeing spreads of disease among workplaces and industries that already have poor safety records,” says Berkowitz. “Without clear federal mandates on the minimum protections employers must take to protect workers, and thus the public, the workers in industries with already poor safety records will be the most endangered.”

With a largely immigrant workforce, many workers say they are scared of speaking up of being deported, as has often been the case when immigrant workers have spoken up during the Trump Administration.

This past year, ICE executed the biggest raid in its history at seven meat processing plants in Mississippi, detaining 680 immigrants. The raid came shortly after as workers at several plants were attempting to unionize in several plants in the area.

One group of women had even won a landmark $3.75 million sexual harassment against one of the employers, Koch Foods, a mere nine months before the raid occured.

The raid seemed to follow a pattern of workplaces being raided by the Trump Administration after workers complained about conditions or attempted to organize. (for more on how immigration raids often follow complaints by workers, read our coverage of the historic Mississippi raid from last August).

Now, many of the same workers who were sent to the detention centers say they fear they are going to die.

Nine different ICE detention centers have experienced outbreaks of COVID-19, and immigrants say that the inhumane conditions there make the centers ripe for epidemics.

“There isn’t enough soap to clean yourself,” says 45-year-old Francisca Morales Diaz, who was detained last summer in ICE’s largest workplace raid that detained 680 immigrants in August of last year, and was recently released with the help of the Southeast Immigrants Rights Center.

“I asked for soap and toilet paper. They give it to you once a week…once a week… and they don’t give you enough liquid to clean yourself,” says Diaz.

Not only do immigrants fear ICE, but without a job, they have no way to make money. Undocumented immigrants are ineligible for unemployment insurance, and there is little work to be had anywhere now.

“They are so afraid of losing their jobs because of the crisis,” says Magaly Licolli, an organizer with Venceremos, a group that is working to organize thousands of poultry workers at a half-dozen meatpacking plants across Northwest Arkansas. “They don’t know what is going to happen because many people are unemployed right now and so they don’t want to lose their job, but also they don’t want to risk their health or their lives.”

She says that many workers in one meatpacking plant have told her that their management has even threatened to fire workers who have spoken out about confirmed cases of COVID-19.

“They say that they are so intimidated by the company that they have threats that they are going to fire [them], and we are trying to see how we can break through that,” says Licolli. “They want to have social distancing in the plant, but they continue working shoulder-to-shoulder in some areas of the plant.”

Some workers are starting to fight back. Venceremos has helped to win some changes for Tyson poultry workers, including promises of more cleaning, social distancing, and a $500 bonus if they stay on staff for three months during COVID-19.

However, organizers say it’s not enough. They want personal protective equipment, paid sick leave, paid quarantine, and hazard pay for meatpackers, who make only $12-an-hour on average, according to Venceremos.

In addition to advocating for company changes, workers’ rights groups like Venceremos are helping to train and educate workers on safety practices for dealing with COVID-19 as well as building community support for the workers.

“We need to understand that workers’ health is public health and that we all have to join forces and support each other and that we overcome this crisis; otherwise, we are going to keep having outbreaks,” says Licolli.

Nationwide, meatpacking workers are fighting back and demanding justice.

In Greely, Colo., over 1,000 immigrant workers walked off the job at JBS plant, where 2 workers have died & 50 tested positive for COVID-19. At Pilgrim’s Pride in rural Virginia, workers off the job considered over safety last week as well.

And in Souderton, Pennsylvania, UFCW Local 1776 members walked off the job last week at a JBS packing plant after their union leader Enock Benjamin died of COVID-19.

Benjamin had been sick but was unable to get tested for COVID-19. He died after work in his home with his family screaming as they waited 20 minutes for an ambulance to show up that failed to get there in time to save him.

Despite intimidation, meatpackers in rural America are standing up and fighting back.

“Our union members are heroes. They are feeding America during the COVID-19 pandemic, and they need to be protected,” says RWDSU President Stuart Applebaum. “Day after day, we hear reports of our members contracting the COVID-19 virus and even succumbing to it. We won’t stand for that and neither should the giants of the poultry industry.”

This article was originally published in Payday Report on April 10, 2020.