Inaugural Sermon: A God Appointed Leader to Build a Wall

Led this year by Robert Jeffress, a Southern Baptist pastor, Trump’s inaugural mass was entitled “When God Chooses a Leader”. The title is a reference to the biblical figure, Nehemiah, who built a wall around Jerusalem for protection. 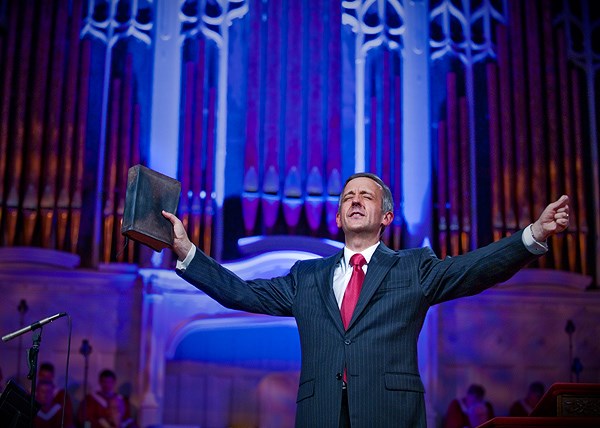 Prior to Trump’s official inauguration ceremony, he attended the traditional Inaugural Mass. Led this year by Robert Jeffress, a Southern Baptist pastor, the mass was entitled “When God Chooses a Leader”. The title is a reference to the biblical figure, Nehemiah, who built a wall around Jerusalem for protection.

The Inaugural Mass has been a tradition since FDR assumed the presidency. Rarely has the institution been considered controversial; however, the choice of Pastor Jeffress, as well as the content of his speech, reflect Trump’s hateful rhetoric and policies.

Pastor Jeffress leads a 12,000 person mega-church in Dallas and is a regular guest on Fox News. He is known for inflammatory remarks about Muslims, LGBT people, Catholics and Mormons. In 2010, he said that Islam promotes pedophelia and called it an “evil” religion as well as that gay people live a “miserable lifestyle” and that gay rights will lead to the “inevitable implosion of our country”. He added that Mitt Romney, a Mormon, belonged to a cult and that the Catholic church can’t be trusted.

In the months prior to Trump’s election, Jeffress campaigned for Trump. In a tweet in early January, he said that Trump would likely be the “most faith friendly President in our nation’s history.”

Pastor Jeffress’ hateful comments match Trump’s hateful rhetoric and support Trump’s racist plan for a wall. At the same time, thousands across the country are on the streets protesting everything Trump and Jeffress stand for.

Just had tremendous visit w/President-elect @realDonaldTrump! I predict he'll be the most faith-friendly president in our nation's history.