Last Friday, the German parliament approved a colonialist pact against Greece. Although a broad majority voted in favor, the governing parties faced an internal opposition. A dispute that even reflected itself within Merkel’s cabinet. 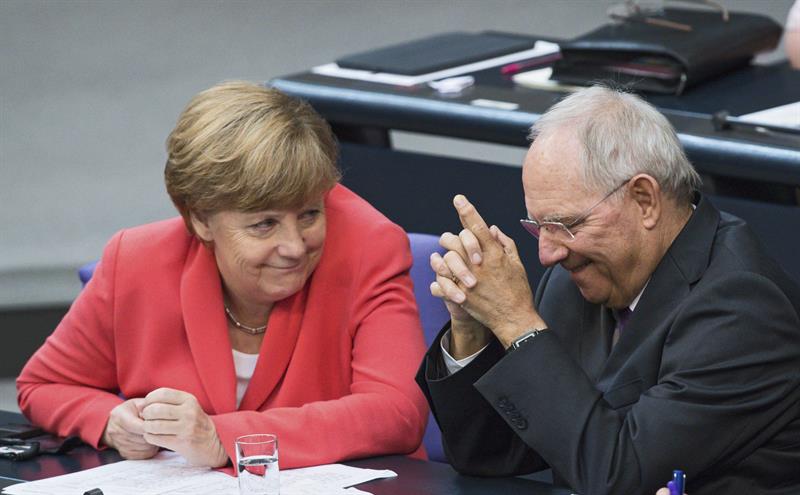 69 out of 485 present parliamentarians of the governing CDU-SPD coalition refused obedience to Chancellor Angela Merkel’s line in the plenary session of the German Bundestag on Friday. That day, negotiations with the Greek government based on the memorandum imposed on July 12th were approved. 69 that is one out of every seven Members of Parliament which belong to the governing coalition. If separated by parties, the disloyalty goes even further: 65 of the “deviants” are members of Merkel’s own party, the CDU, or her Bavarian sister CSU, representing more than 20% of the Union’s parliamentary seats.

An opinion piece by Robert Roßmann in Monday’s Süddeutsche Zeitung even went so far as to say that without Minister of Finance Wolfgang Schäuble’s support, Merkel would have had to fear for her majority within the governing coalition. True or not, those 65 parliamentarians that voted against (60) or abstained (5) Merkel’s proposal represent the biggest internal opposition in Merkel’s party since her ascent to power in 2005.

In the past, no matter which decision Merkel made, her party followed suit almost unanimously, whether the parliamentarians agreed or not. But not this time. And thus, Roßmann called the vote on Friday “the end of Merkel’s omnipotence in the CDU”. Where does this opposition stem from?

While it may be too early to call an end to Merkel’s reign in the CDU, it is clear that the dispute over how to approach the issue of colonizing Greece has sparked great debates within Germany’s ruling class and her parties. And especially in the last couple of weeks, Wolfgang Schäuble has become the icon of those who are in favor of an ever stronger stance against Greece.

To be clear, there is no dispute in the German bourgeoisie about the final goal: Germany’s undisputed reign over Europe. For years now it has been obvious that German imperialism wants to use the economic crisis to redistribute power inside the European Union. From its start, the EU has been an instrument of German capital built to extend its reach into Eastern and Southern Europe, both as an access to new markets and as a source of cheap labor. But Germany was not strong enough to achieve this goal on its own, and thus partnered up with France, forging the Berlin-Paris axis.

In the last couple of years, this has changed. While France has itself been struggling as a result of the crisis, Germany has been putting pressure on the rest of the European countries, using Greece as a laboratory for its policies. The troika, the conglomerate of IMF, ECB and EU institutions mandating even more austerity measures for Greece, is squarely in the hands of the representatives of the German capital.

And herein lies the source of the dispute: Is Germany strong enough already to do away with all diplomacy and rule over Europe without paying attention to what other imperialist countries have to say? Two of the most powerful imperialist countries in the world, France and the United States, have been warning the German government that it needs to allow for a certain cut of the Greek debt so as not to endanger the Eurozone and strengthen the geopolitical stance of countries like Russia or China.

Wolfgang Schäuble, however, has positioned himself squarely against any alleviations for Greece, and has even proposed a “temporary Grexit” — in opposition to Merkel, and to the Social Democratic Party (SPD), the partner in the Grand Coalition. Even after much criticism and after Friday’s vote, Schäuble has reiterated this proposal several times. In the negotiations prior to the agreement signed on July 12th, his strong stance had threatened to push the Greek representatives into rejecting the memorandum.

For now, Schäuble’s extortionist tactics have succeeded, and the Syriza government has succumbed completely to the colonialist pact. But many fear that too much pressure will put the entire Eurozone — and thus Germany’s Europe-wide market — into peril.

Merkel, and high-profile SPD politicians like Minister of Economy, Sigmar Gabriel, or President of the European Parliament, Marthin Schulz, have not held back with extortionist rhetoric against Greece, but none went so far as Schäuble. He represents a part of the conservative establishment that demands much more aggressive exterior politics.

Nevertheless, it also has to be said that the “no” votes from the CDU members on Friday were at least in part tactical votes, since it was clear that both the SPD and the Green party would vote in favor of the memorandum. But that does not mean that all of them would follow Merkel if the majority were in danger.

As of yet, the internal disputes in the German government have not led to irreversible fractions within the governing parties. Both strategies, represented by Merkel and by Schäuble, are two faces of the same coin. In the present situation, Schäuble’s more aggressive rhetoric can even be beneficial for Merkel — externally, if used in conjunction with diplomatic gestures, and internally, in order to keep the critics within the party in line.

But this will come at a price: Schäuble has already announced that he would be willing to step down as Minister of Finance if forced to act against his beliefs. Another extortion, to be sure, but this time against Merkel. The outcome remains to be seen, but one thing is clear: German imperialism is on a path towards more aggression.