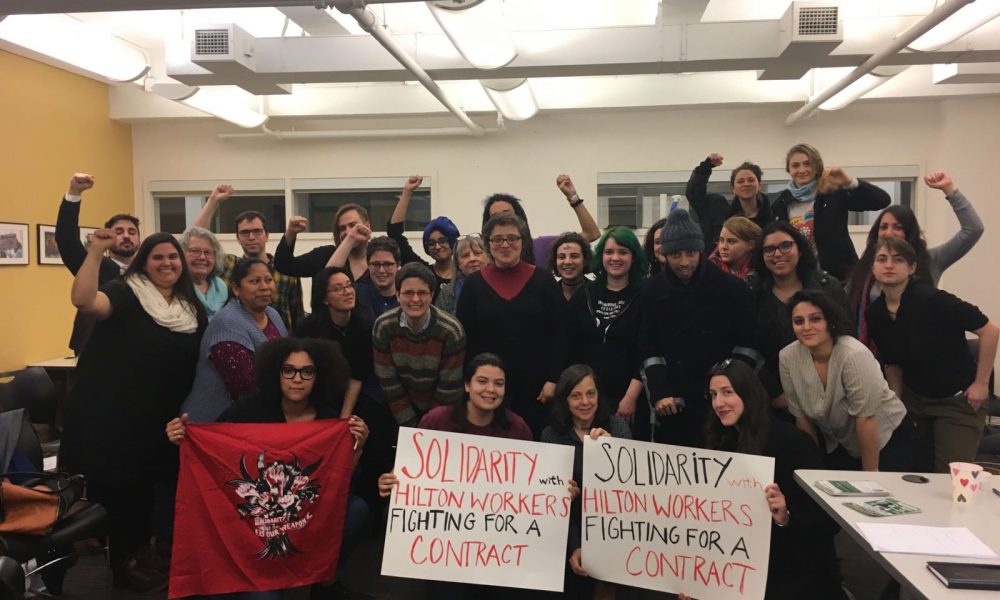 The workers of the Hilton Hotel in Stamford, CT, defy all expectations. Some workers speak Haitian Creole, others Spanish and others English– and yet they engage in heated discussions about the direction of the union constantly at the weekly meetings. Some of the most combative workers are immigrant women housekeepers, who before the union were cleaning 30 or more rooms at a starting rate of a little over $10 an hour.

The Hilton workers voted to unionize in December; a difficult feat as demonstrated by the highly publicized union defeats at Boeing in South Carolina and Nissan in Mississippi. What’s more, only five workers vote against the union, with 110 voting for it.

After unionization, the workers have continued to meet and plan the strategy ongoing campaign for a first contract. They continue to engage in various actions, seeking to defend a fired coworker, as well as workers who were taken off the schedule ostensibly due to their temporary protected status.

The workers also engage in classes about Marxism and have an upcoming workshop with Adolph Reed on racism and class struggle. However, these workers are not just being taught, they are doing some teaching. Maria Ines, a housekeeper from the Hilton was on the opening panel for the International Women’s Strike in New York City, speaking about the struggle to unionize and the need for a united working class.

Committee members will also speak at Wesleyan University on March 1 alongside members of the International Women’s Strike to build stronger relationships with students and other communities in support of the Hilton struggle and the exploitation and oppression experienced by their workers.

As the Stamford Hilton workers begin their contract negotiations, the International Women’s Strike organizing coalition, which include members of several community and left organizations such as the DSA, ISO, Socialist Alternative, as well as workers centers. The Student/Farmworker Alliance was also present, discussing the Time’s Up Wendy’s March in New York City. These representatives gathered to take a photo in support of the Stamford Hilton workers.

They also proposed that a worker from the Stamford Hilton be one of the main speakers at the March 8 rally. The rally will begin in Washington Square Park at 5 pm and be followed by a march.