The Dockworkers’ strike shows the real political power of unions and organized labor to fight imperialism and to protect the interests of working people around the world. 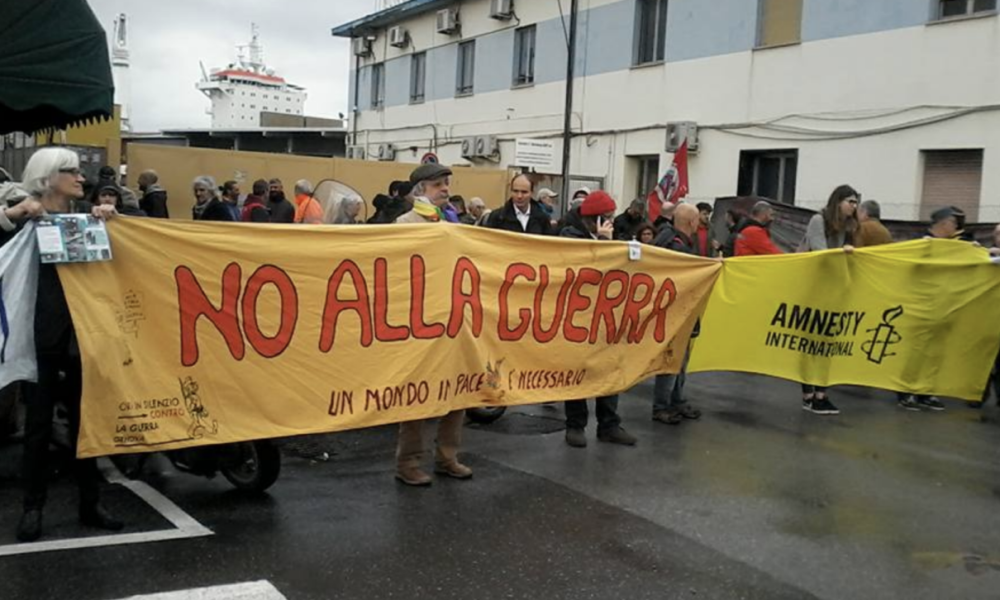 In the ongoing saga of the Saudi-Arabian cargo ship the Bahri-Yanbu, Italian dockworkers in Genoa are still refusing to load cargo onto the vessel, which they say is carrying European Union manufactured weapons destined for the war in Yemen. The ship, which docked in the port of Genoa on Monday, is purported to have picked up weapons in Antwerp, Belgium, and other cargo in Spain before arriving in Genoa. According to documents leaked by the French NGO Disclose, the same boat attempted to pick up an additional cache of Caesar Howitzer cannons in Le Havre, France. The ship, however, was successfully prevented from doing so by human rights protesters at the French port who filed a legal suit claiming that the cargo violated United Nations arms treaty regulations.

The Bahri-Yanbu arrived in Genoa on May 20 to pick up a shipment of generators, which human rights activists also claim are intended for use in the war against Yemen. The Italian Dockworkers union (CGIL), which has a history of such resistance, have refused to load the generators, stating “We will not be complicit in what is happening in Yemen.” In response to the strike, port officials declared that only civilian cargo would be loaded onto the ship, but even that has yet to happen, thanks to ongoing protests by anti-fascist and human rights activists at the port. As of Tuesday, May 21st, the ship was still docked and unloaded in Genoa.

By successfully preventing and delaying the arrival of such weapons of war, the CGIL and protesters have potentially saved the lives of many innocent Yemenis, but they have also set an inspiring and important precedent that should and must be taken up by other trade unions across the globe. Like dockworkers in Oakland, who in 2010 refused to offload Israeli cargo after the country’s attacks on the humanitarian aid vessel the Mavi Marmara, The CGIL’s refusal to allow themselves and their labor to be made complicit in the murder of hundreds of thousands of innocent workers in Yemen shows the true political power of labor unions to effect real change in the world beyond the usual economic give and take that has defined so much bureaucratic union activity in the 21st century. Indeed, port workers, truck drivers, and warehouse workers seem especially well-suited to political strike actions such as these.

As the logistics revolution and just in time models of production and redistribution have spread across the globe, corporations and companies have become increasingly vulnerable to strike actions that target the logistics sector. As Kim Moody has argued:

The major ‘nodes’ in this backbone of production and circulation are not only key points of transshipment, but also huge concentrations of workers. If the pressures of today’s faster-moving production of goods and services are an incentive to resistance and to some extent the means of effective action, the new concentration of workers in massive “logistics clusters” has provided potential sites for a major rebellion.

In other words, warehouse workers, truckers and port workers are on the front lines of the war with capital and represent some of the most powerful weapons at the disposal of the working class. Continuing to unionize, organize and radicalize these workers, bringing them into greater and greater contact with working class political activists and other rank and file unionists, and helping them build rank and file democracy within their unions can set the ground for further massive strike actions that could hit capital where it is most vulnerable.

All workers who are able have the responsibility to use their collective power to refuse to be complicit in imperialist murder, environmental destruction, or political or economic oppression everywhere. In the world we live in now such actions will be more and more necessary as the environment continues to degenerate, wars proliferate, and far-right xenophobia, nationalism and racism continue to gain influence. This is why we applaud and stand in solidarity with the dockworkers of Genoa.