On August 29, 2015, marches took place in three different cities in Los Angeles County to mark the 45th Anniversary of the Chicano Moratorium. 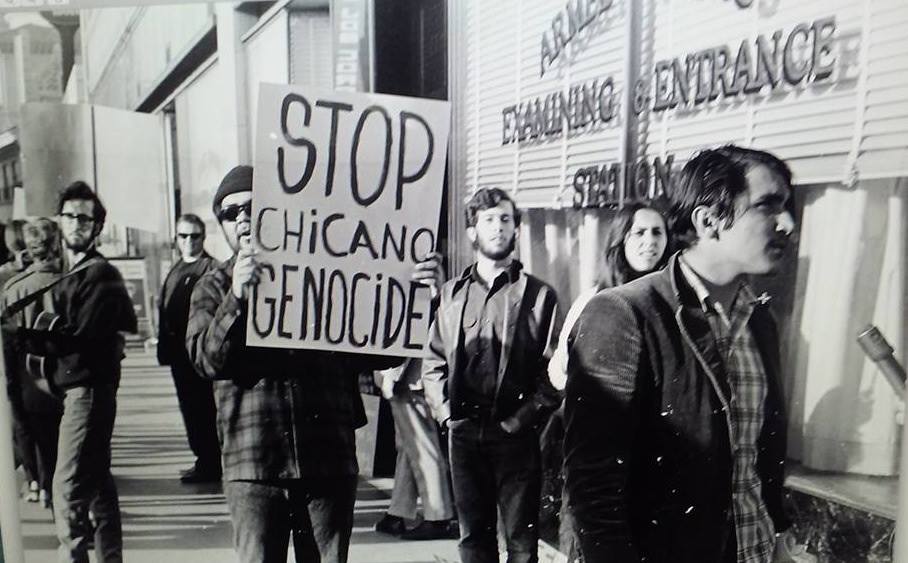 Street takeovers, demonstrations and marches as well as Aztec Dancers, jarocho music and hiphop flows were part of events around the city. Activists, union leaders and members of immigrant and Chicano rights organizations spoke in solidarity with the immigrants rights movement, denouncing racism, patriarchy, imperialism and white supremacy.

On August 29, 1970, a protest against the Vietnam War organized by Chicano Power activists in East Los Angeles was violently targeted by police. Organizations such as the Brown Berets developed a political ideology of Chicano Nationalism and the link between Chicanos living in the US and Mexico. Among the brutal acts of police repression was the murder of three people, including the left journalist Ruben Salazar.

The speakers in the now-named Ruben Salazar Park affirmed the fight for Chicano rights and against imperialism as a continuing necessity. Chicanos have been leading the immigrants rights movement, fighting for ethnic studies and against racism. Julia Wallace, a writer for Left Voice, speaks in solidarity with the Chicano rights movement and on the need to build class and Black and Brown unity against capitalism and imperialism.

¡Buenas tardes, camaradas! Thank you to the organizers for having me speak. My name is Julia Wallace and I am a member of the socialist group Struggles United/Luchas Unidas or (SULU) and I am also a writer for Left Voice News. I was asked to speak to you about solidarity. And I am here in solidarity with the Chicano struggle. I am also here as a comrade. I would to talk about the difference between a newer word used “allies” and an older word “comrades” camaradas. An ally is someone who is supportive of your struggle but is not part of your struggle. That is wrong. We are not separate supporters but comrades in a war of resistance a war against oppression. How one be an “ally” to the Black community when Obama is part of the “community”? Obama is the deporter in chief. He is really not even an ally to the Black community either. Instead we need to be comrades challenging each other, building a united movement of resistance from the shoulders of our elders or veteranos. I know if you win we all win! I am not simply your “ally” because of our struggles are against a common enemy.

If you are beaten down, I am beaten down; if the cops succeed in attacking Black people, it is a setback for all oppressed people. Even more so being a comrade as a word is also a word of struggle. There is a war being enacted on us- this war is waged our communities through evictions and gentrification, in our schools through budget cuts, white washing history and police on campus and our workplaces because we are paid less than what we produce- we are super-exploited. There is a war is a war even on our cars through the retenes. We must be comrades in the class war being enacted upon us.

45 years ago the cops beat Chicanos down for resisting the imperialist war in Vietnam. Chicanos had the understanding that the war across the world is an imperialist war by an imperialist government just like the wars of today. The Chicano’s resisted and refused to obey. Revolutionaries were born in the streets and the fight continues today with the immigrant rights movement and against the imperialist war this government continues to brutalize the world with. This is the history of our side of the class struggle the side of resistance. We as Black and Latino, Chicano working class people have a shared struggle.

This month, this year is also the 50th anniversary of the Watts Rebellion. The imperialist war in Vietnam killed working-class Black and Latino people. The Blacks and Latinos joined together against racism and imperialism an is important we continue that struggle today. Black Lives Matter can support the Undocu-queer movement and immigrant rights. Support workers fighting for a $15 minimum wage. Support all struggles of the oppressed. We can unite as the Black, Brown and even white prisoners did in an epic hunger strike along California to abolish the SHU. Your event has invited Black people and Black women to speak. We are comrades in struggle when we support each other and fight together against the bosses, against the cops and against the internal enemies: the bigots who target women and queer people, those who think Black and Brown should be divided and the opportunists who make money or their career off of the suffering and exploitation of our communities.

Capitalism is racist but it also targets Blacks, Latinos, Chicanos and immigrants (or a combination of those) with the same viciousness. We are not part of separate struggles and we need to unite and challenge each other. Organize for socialism and a Black and Brown united fight against capitalism. We are not allies we are comrades in the struggle!!