Unions representing the Customs and Border Patrol and Immigration and Customs Enforcement were among the first to endorse Trump’s nomination for presidency.
Several months later, despite federal stays, they carry out detention and deportation orders under Trump’s xenophobic ban on refugees and immigrants from seven predominantly-Muslim countries. The CBP and ICE unions have no place in our labor movement. 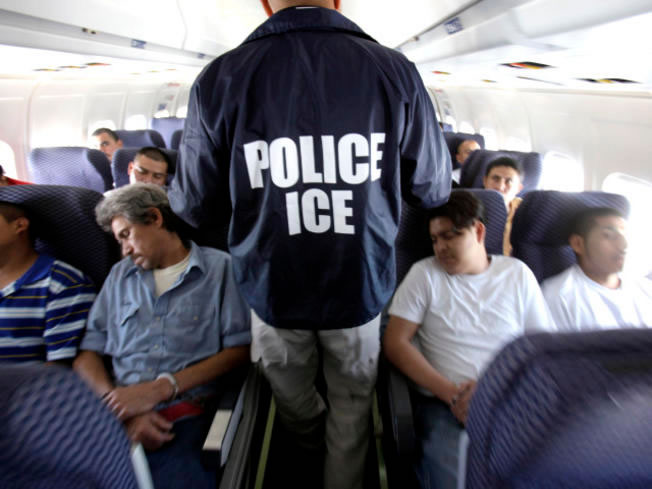 The National Border Patrol Council, which represents 16,500 Customs and Border Patrol (CBP) agents and the National Immigration and Customs Enforcement Council reportedly representing 7600 ICE agents were among the first unions to come out in support of Trump last March–six months ahead of the Fraternal Order of Police. NBPC union officials defended their first-ever endorsement with the same national chauvinist, immigrant-damning language so endemic to Trump’s platform:

If we do not secure our borders, American communities will continue to suffer at the hands of gangs, cartels and violent criminals preying on the innocent. The lives and security of the American people are at stake…Mr. Trump will take on special interests and embrace the ideas of rank-and-file Border Patrol agents rather than listening to the management yes-men who say whatever they are programmed to say. This is a refreshing change that we have not seen before – and may never see again.

Since Trump took office, the CBP’s allegiance to Trump has been amply demonstrated in its implementation of Trump’s ban on the entry of immigrants and refugees from seven predominantly Muslim countries. Hundreds of people have been targeted, detained and interrogated at numerous airports since the order was signed last Friday, sparking protests throughout the country.

Despite several stays by federal court judges, the Department of Homeland Security on Sunday reiterated its commitment to Trump’s orders. On-the-ground reports confirm that officers continue to detain, interrogate and deport.

Nisrin Elamin is a Black Muslim woman who was returning to New York City from Sudan on Friday. Upon arriving at JFK airport, she was questioned, briefly handcuffed, patted down, and detained for five hours. She relayed a mixed experience, with agents’ behavior ranging from apologetic to aggressive, confirming the variance in how individual officers are interpreting and implementing Trump’s order.

By expanding the powers of individual ICE agents to determine who will be detained and deported, travelers, refugees, immigrants and green card holders are left with a terrifying lack of information as to what to expect at these checkpoints. As Elamin describes, positionality–race, religion, nationality, political views, and perceived class status–all played into how agents profile and detain passengers. She spoke about her experience in a JFK holding area in a Fusion video:

We were told that the jurisdiction we were in was a unique jurisdiction and that the officers were the judge…I felt like my rights as a human being was suspended in that space…One of the things that struck me in those moments when I was feeling humiliated was that this was standard procedure.

Donald Trump is keeping to his campaign promises to terrorize the lives of immigrants, particularly from Latin America and the Middle East and North Africa region. Harking back to powers granted in conjunction with the Patriot Act in post-9/11 U.S. and building on Obama’s deportation machinery, ICE officers now have jurisdiction to detain or deport any “illegal alien” with or without evidence of committing a crime. Last week, Trump ordered the hiring of 10,000 more immigration officers, tripling the current number. He signed off on the construction of additional detention centers along the southern border, and has committed the federal government to advancing the construction of a wall along the southern border.

These orders will expand the powers and multiply the ranks of Immigration and Customs Enforcement (ICE) — the largest law enforcement under the Department of Homeland Security, which emerged as a force with “special powers” in 2003. For over a decade, ICE has normalized the practice of combined surveillance, raids, detainment, and brutality that go largely unchecked. According to the Center for Constitutional Rights , ICE under the Obama Administration has carried out warrantless home raids, “especially in remote immigrant communities.” In addition, ICE is responsible for programs like Secure Communities (SCOMM). Despite its misleading name SCOMM has “funnel[ed] even more people into a quota-driven immigration detention and removal system, and center local law enforcement in the government’s dragnet deportation scheme.”

While capitalists squabble over the particular forms in which immigrants are criminalized/marginalized, both parties have passed anti-immigrant laws and implemented coercive methods. ICE, along with the NSA, FBI, detention officers, and local and state police, are the brute force behind the systemic harassment, surveillance, deportation, torture, and killings of immigrants. These practices have persisted under GOP and Democratic Party administrations alike.

The above-mentioned National Border Patrol Council is an affiliate of the American Federation of Government Employees, a member of the AFL-CIO. How is it that millions of working-class people represented by the AFL-CIO share house with border patrol agents who spend their days terrorizing millions of working-class people? How do we fight against racism and anti-immigrant policies when our own labor organizations extend a warm, “brotherly” embrace to anti-immigrant federal agents?

As a whole, US immigration policies, ICE and border patrol agents serve to 1) maintain (and normalize the dehumanization of) an underclass of workers who face manifold exclusions and discrimination, are forced to work under the worst conditions and provide fodder for capitalist super-profits; 2) drive working conditions, wages, and the strength of organized labor down; and 3) keep the working class divided — from united action and organization against bosses, bigots, developers, and capitalist parties.

Like cops, La Migra — immigrant officers, border patrol — are enemies of the working class as a whole . They carry out the dirty work that guards capitalists’ outright control over all aspects of society, including workers’ time, art, health, education, homes, and the wealth we produce.

Workers and unions have a place in the struggle for equal rights for immigrants, Muslims, and people of color and in the resistance against racist policies and police brutality. A step toward building this united front is to demand that our labor unions and confederations be free of the State’s forces of repression.

La Migra helps keep the bloody line razor-sharp between undocumented and documented, “native-born” and immigrant. Our task is to obliterate these lines that debilitate our collective power, and instead unite where we find each other shoulder-to-shoulder and in common struggle: in the workplace, in our unions, in schools, and in the streets.