Left Voice: A New Initiative for the Izquerda Diario Network

Almost a year after the creation of La Izquierda Diario and its international network of news websites, we are launching an English-language website, Left Voice. 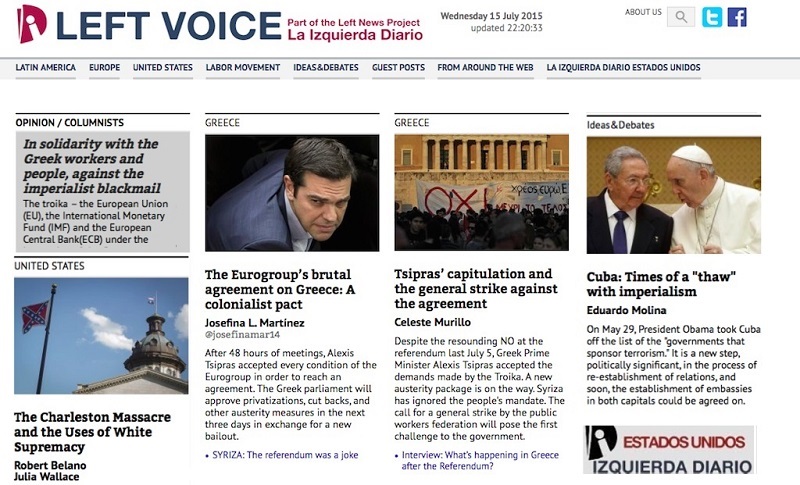 After successful launches of La Izquierda Diario in Argentina, Mexico, Brazil, and Chile and the website Permanent Revolution in France, a new website joins the network: Left Voice for the English-speaking world.

Since the launching of La Izquierda Diario, we have offered our readers a “global portal” onto news, articles, and updates from militants in 15 countries. This network is driven by organizations such as the Socialist Workers’ Party (PTS) in Argentina, the Revolutionary Workers’ Party in Chile, the Movement of Socialist Workers in Mexico, and the Revolutionary Workers’ Movement in Brazil, which are all members of the Trotskyist Fraction- Fourth International (FT-CI).

Since September of 2014, the Izquierda Diario network has received 6 million visits. In this last month, there have been 475 thousand in Argentina , 138 thousand in Brasil , 96 thousand in Chile , and 56 thousand in México . In these countries, Izquierda Diario reflects the primary problems in politics, culture and class struggle on a daily basis. It reflects different aspects of the lives of workers and of youth and oppressed groups such as women, LGBT people, Black people, and indigenous people.

La Izquierda Diario also has special sections that address issues in other countries, such as Uruguay, Venezuela, and Bolivia, and we also reach Europe, vía new section on Spain. As a part of this network, Permanent Revolution, a French site with daily news, was launched in June. It has already reached 75,000 visits. The English-language site, Left Voice, joins this international network, opening the door for revolutionary ideas to enter the English-speaking world.

A Leftist Vision for the English-Speaking World

The struggles of social movements, workers and popular uprisings in Latin America are and have been of interest to militants and sympathizers of the Left in the English-speaking world. Left Voice aims to report on key news, such as the decisive moment that Greece is experiencing, as well as leftist analysis and opinions.

Faced with the decline of several of the Latin American “post-neoliberal” governments, corporate media outlets—both for and against those regimes—want to show there are only two choices: to support “progressive” governments, or to support the right-wing opposition. News and views on Latin America are framed within the context of these two choices alone. Left Voice will break this binary by publishing the perspective of the revolutionary left.

For the first time, our main works will be available for English-speakers. Left Voice will publish features on the political activity and ideas of the Trotskyist Fraction-Fourth International (TF-FI). Via our correspondents and with our point of view, we will also inform readers about events and the left debates in the US and Great Britain.

In the US, there are plenty of events to watch closely- pRecent events of interest and relevence to our network include protests throughout the country after the murder of Michael Brown in Ferguson, the Baltimore rebellion after Freddie Gray’s murder, worker and youth demonstrations demanding a higher a higher minimum wage wage, and more.

Great Britain appears to be catching up with its European neighbors. The subway strike last week in London has confirmed the widespread discontent previously suggested at the massive demonstration against austerity. Within a continent characterized by the imperialist blackmail against the Greek people, and the concessions made by the Syriza government, the ideas of the revolutionary Left are especially relevance.

La Izquierda Diario in Argentina, Mexico and Chile, as well as Esquerda Diário in Brazil, was born to challenge the lies of the corporate media controlled by the bosses and their parties, and to raise the voice of the voiceless.

The Hispanic edition of La Izquierda Diario Estados Unidos is another be part of this new initiative. Designed to reach the Latino community living in the US, who face xenophobia both from Republicans like Donald Trump and the Democratic administration’s deportations and detention centers.

We are excited to welcome Left Voice to the Izquierda Diario network’s mission to build an international newspaper for the workers and the oppressed, overcome the international antagonisms the bosses impose, and end imperialist oppression.